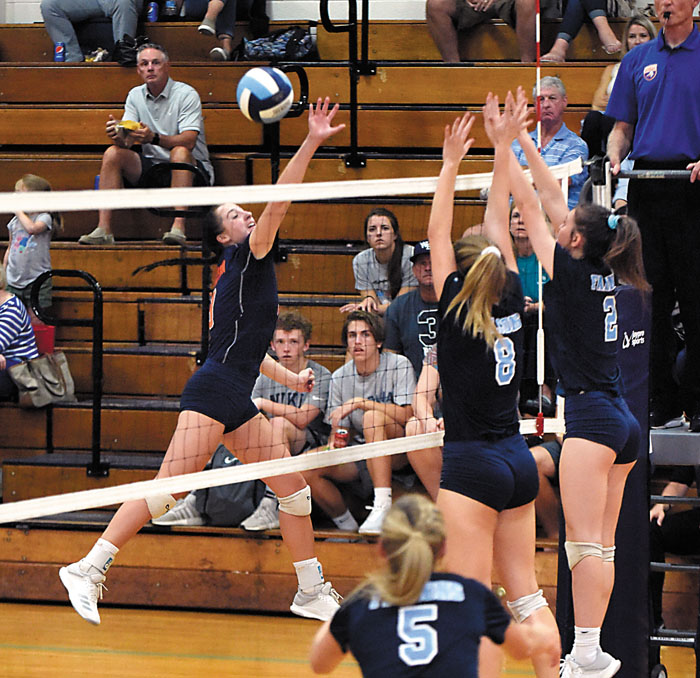 Carson’s Mallory Weast, left, and West’s Carly Stiller (9) and Ava Link (2) during a match on Sept. 20. Photo by Wayne Hinshaw, for the Salisbury Post

CHINA GROVE  — Statesville libero Skylyn Ostwalt does everything humanly possible to keep the ball from striking the floor, diving, sprawling, rolling, but there are times when maximum effort can’t overcome sheer velocity.

Carson senior Mallory Weast has smashed the ball with such downward force, that it strikes Ostwalt’s prone body and ricochets 10 rows deep into the home bleachers. It’s another point for Carson volleyball and another kill for Weast, who is in the home stretch of an illustrious career.

A minute earlier, Weast had registered an even more eye-popping point, hitting on the left outside. Two tall Greyhounds had risen up in textbook position for the block, but she’d defied gravity at 5-foot-6, hung in the air, got on top of the ball, and angled it through both defenders.

The volleyball net is 7 feet, 4 inches off the ground, almost 2 feet over Weast’s head, but she plays way above it, and with a lethal arm-swing.

These next few weeks will draw the curtain on Weast, a huge factor in Rowan County volleyball the past four seasons and one of the top all-round players in the last few decades. Her explosiveness for her size is crazy. She surpassed 1,000 career kills at Statesville on Sept. 18.

She’s also closing in on 1,000 digs, but she’s chosen not to play college volleyball. She’s given the sport just about everything for four years, but her focus in the future is going to be on education and family.

“I’ve had a few offers to play college volleyball, but I want to stay close by and go to school, probably for dental hygiene,” Weast said. “I guess I’m just a homebody.”

Weast’s sister, Madison, was part of Carson’s stellar volleyball class that graduated in 2013, a class that also included, among others, Michaela White, Hannah Elmore and Laura Vaughn.

“Madison really got into volleyball when she was a freshman at Carson,” Mallory said. “I was in third or fourth grade, but I wanted to do the things she did, so I started volleyball early. I’ve always had that advantage of an early start, but I got stuck with the short side as far as the height. Madison is 6 feet tall, and I stopped growing at 5-6.”

By the time Mallory was a freshman in the fall of 2015, she moved right into the starting lineup for a consistently strong program.

“Right off the bat, she was good enough to play,” Carson coach Kelan Rogers said. “She was very good as a freshman and sophomore, and then she was awesome as a junior. For a 5-6 outside hitter, she’s been a fantastic player. She’s averaged better than four kills per set, she digs at a high level, she serves consistently, and she’s a leader. She’s almost always in control, and she exudes so much confidence that it gives all of her teammates confidence. Anything good you want to say about Weast, you can put my name next to it.”

Weast probably could’ve been a standout basketball player. You can’t teach the reflexes, the reactions, the vertical explosion, the mental toughness that she brings to the table.

She plays in basketball gyms, but she’s never dreamed of making 3-pointers. Her athletic focus has never wavered from volleyball.

“I love the intensity and I love the pace of volleyball,” Weast said. “And I like the teamwork. Volleyball is never a one-person thing. Everyone contributes something. You never get the kill without the pass and the set.”

Weast has had a chance to play with fine setters — Morgan Hester, Chloe Jacobs, and then Grace Thomas for the past two seasons.

Weast also has had the opportunity to play with powerful hitters such as Elena Turnbull, Lindsay Elmore, and now sophomore Jaden Vaughn, so opponents have never been able to focus exclusively on stopping her.

“We’ve always played in conferences with multiple strong teams, and that’s made us work to get better,” Weast said. “And I’ve been lucky as far as family, teammates and coaches. They’ve supported me and they’ve pushed me.”

The pushing has paid off. Carson (17-3, 6-2 3A North Piedmont Conference) is 91-17 in Weast’s four seasons. Carson finished each of the past three seasons ranked in the top 10 in 3A and was ranked ninth out of all classifications in 2017.

Since Weast achieved her 1,000th kill on the road, the team honored her for the feat at the home match with East Rowan on Sept. 24.

“My teammates surprised me,” Weast said with a laugh. “They made a sign for me. It was cute. They were sweet.”

The league that Weast plays in — the NPC — is anything but cute and sweet. Four of the league’s six members — West Rowan (4th), South Iredell (7th), Carson (8th) and defending state champ North Iredell (9th) — are ranked in the top 10 in 3A as the final week of the regular season gets under way.

Second-place Carson hosts first-place West Rowan today and goes to third-place South Iredell on Thursday, so no one in the state will have a more challenging week than the Cougars.

“Playing the hard teams, that’s what it’s all about,” Weast said.

NOTES: Volleyball is one of Rowan’s stronger sports. In addition to Carson and West Rowan (16-2, 7-1), which is ranked eighth for all classifications, South Rowan (16-4, 14-2) is ranked 13th in 2A and tied for first in the Central Carolina Conference. South finishes the regular season with a home game against Central Davidson today and a road trip to Salisbury on Thursday. South has split league matches with Ledford, ranked seventh in 2A, and West Davidson, ranked ninth. … West Rowan will finish the season at home on Thursday. It will be Senior Night and a “Dig Pink” match and the Falcons will honor Joyce Wilhelm.