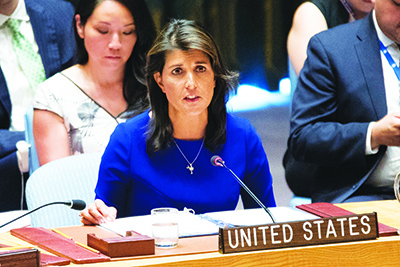 American Ambassador to the United Nations Nikki Haley speaks during a Security Council meeting on the situation in the Myanmar on Aug. 28 at United Nations headquarters. (AP Photo/Mary Altaffer)

Nikki Haley, the U.S. ambassador to the United Nations, announced Tuesday that she’ll be resigning, and her tenure in the administration tells us a good deal about the Republican Party that Donald Trump has built.

Here’s how Trump described her time at the U.N. in an event in the White House today, with his typical informed insight:

“That was really the thing I think she did best at the United Nations: She got to know the players. She got to know China, Russia, India. She knows everybody on a very first-name basis, and they like her.”

There’s a little more to being U.N. ambassador than learning everyone’s names, but we can’t expect Trump to bother figuring out what the job might involve. After all, it’s just a bunch of foreigners, right?

Haley was vague about why she decided to resign (she mentioned “term limits”), but there are some indications that she was marginalized by the new national security leadership in the administration of National Security Adviser John Bolton and Secretary of State Mike Pompeo, both of whom (especially Bolton) tend to approach other countries with a combination of belligerence and contempt, which would make the task of any U.N. ambassador difficult.

Haley did say that before anyone asked, she won’t be running for president in 2020 but will be campaigning for Trump’s reelection. Which itself is pretty shrewd: Raise the issue so people talk about it, but also deny anything that smacks of disloyalty to Trump. She didn’t say anything about 2024, however, and she does seem to have been looking for that seam where she can be independent enough to not discredit herself with a future general electorate, but still be enough of a Trump booster to be viable with a Republican primary electorate.

When Haley took the job in the first place, it was a bit of a surprise. Serving as the governor of South Carolina at the time, she was what we used to call “a different kind of Republican” – highly conservative to be sure, but not with the rage we’ve gotten so used to in other members of her party.

A woman of South Asian origin, she supported removing the Confederate flag from the grounds of the state capitol and endorsed Marco Rubio in 2016. In many ways, she’s exactly the kind of different face many in the party hoped they could put forward to attract a wider base of support, an idea that was emphatically rejected by Trump and his supporters.

But in one way it made sense for her to sign on with the Trump administration. If she wants to run for president in 2024 or after (she’s only 46), it would be good to have a foreign policy resume to go along with her experience at the state level. Trump presented that opportunity, even if working for him might taint her forever.

That is a fate she may have escaped. From most of those who work for him, Trump demands not just personal obsequiousness but regular public displays of lickspittlery. But since most Americans pay little or no attention to the United Nations, it was seldom necessary for Haley to beclown herself on Trump’s behalf in a high-profile way.

So she may be one of the few Trump officials who departs without becoming an object of ridicule, scorn or the attention of prosecutors. If she does have presidential ambitions, she’ll have a different problem: convincing the GOP base that she’s Trumpian enough to deserve their votes. To repeat, Haley is extremely conservative and will be able to tout her commitment to tax cuts for the wealthy while railing against foreign enemies. But she does remind one of what Mike Huckabee used to say about himself: that he was a conservative, but he wasn’t angry about it. In Donald Trump’s GOP, that doesn’t fly.

Might it someday? The party we see today might not be the same party in six years. But it’s difficult to see whether anything, even a couple of defeats at the polls, would truly force (or enable) it to change. For the moment though, at least Nikki Haley can say that almost alone among those who went to work for Donald Trump, she emerged with her reputation mostly intact.

Waldman is an opinion writer for the Washington Post’s Plum Line blog.