Hurricane Michael expected to drop lots of rain on Rowan 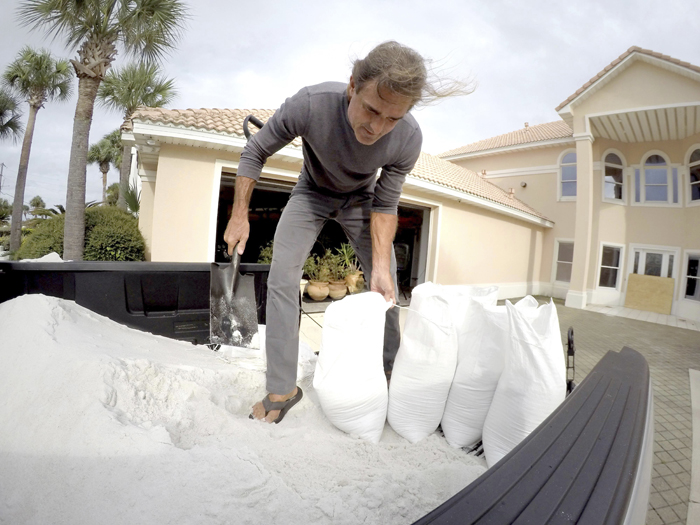 SALISBURY — Weather forecasters expect Hurricane Michael to weaken as it heads toward North Carolina, but it will drop lots of rain on the area through at least Thursday afternoon.

Areas including Rowan County can expect not only rain but the possibility of downed trees as the ground continues to become saturated. 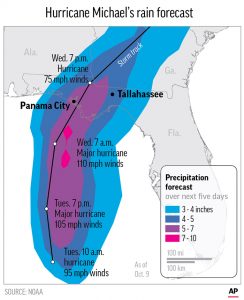 Graphic shows the predicted precipitation over the next five days caused by Hurricane Michael.

“Between now and (Wednesday) midday, there will be spotty rain showers. It will start picking up tomorrow evening and Wednesday night,” said National Weather Service meteorologist Scott Krentz.

Krentz said the rain will be off and on and heavier at times. The Weather Service says the threat of heavy rain and flash flooding in the region will be highest during the day Thursday.

“Right now, expect about 3 inches of rain when this system gets out of here in a 24-hour period. You could have issues with smaller streams,” Krentz said.

He said forecasters don’t expect major problems with the Yadkin River, but there could be localized flooding in smaller streams. 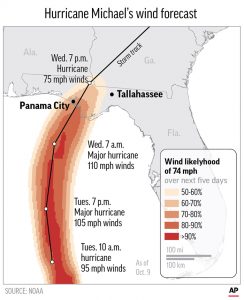 The wind is also expected to pick up late Wednesday afternoon. Krentz said residents should expect 15- to 20-mph sustained winds and gusts of 25 to 30 mph.

“There could be some downed trees because of the wet soil. You could have a few downed trees and power outages. Not expecting a lot, just localized outages,” Krentz said.

Jack Neubacher was always a part of the airport