Other Voices: I-95, ‘America’s Main Street,’ due for repair 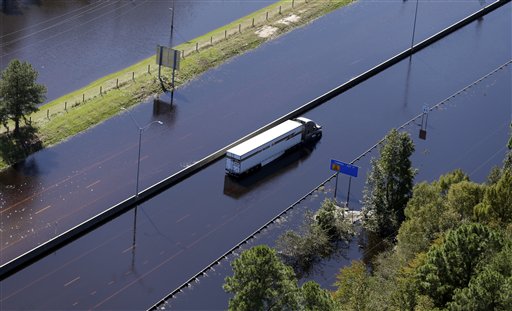 An abandoned tractor trailer on I-95 is surrounded by floodwaters from Hurricane Matthew in Lumberton on Oct. 12, 2016. (AP Photo/Chuck Burton)

A decade ago, a plan to widen Interstate 95 in North Carolina, and pay for the work with tolls, stoked an angry response that led to the plan’s demise. The image of toll booths turned radioactive. The political pressure was intense, lawmakers sprinted away from it and state transportation officials buried it in the deepest grave they could dig.

And then? Nothing. No action. No suggestions. No plans. Nothing — except an increasingly congested highway, parts of which were largely unimproved since I-95 was built.

And there it sat, until the past year or two, when the movement to rebuild “America’s Main Street” was revived and began steaming ahead. The state Department of Transportation came up with a new plan for the highway and there’s not a single toll booth in it. And by leveraging both state and federal funding, the timetable for widening and modernizing some of the old highway’s most problematic sections has accelerated.

Just last week, there was more good news: One of I-95’s worst bottlenecks in this state is getting almost immediate attention. A segment of the highway in Cumberland and Harnett counties will be widened from four to eight lanes, and the project will begin next spring, when the DOT plans to award a contract to a design and construction team. The work will widen the road between Exit 56 in Eastover to Exit 71 near Dunn.

The latest lift for the project came from a federal Infrastructure for Rebuilding America grant, which the state won this summer to improve highways and broadband service in eastern North Carolina. A DOT spokesman said the grant allowed the department to move the project up on its priority list, where projects compete for funding and start dates.

In 2020, the DOT plans to award another contract, to expand the highway between Exits 71 and 81, from Dunn to the junction with Interstate 40. That project will also include new interchanges and bridges. The construction phase of both projects is expected to take about four years.

There’s nothing but good news in all of that, especially for local drivers who use I-95 regularly.

But the devil will be in the design details, and in the past few weeks, we’ve seen a new but urgent issue make itself known: The flooding from Hurricane Florence, which was especially severe in this region and which shut down the highway in multiple locations in Harnett and Cumberland counties. The problem isn’t likely to be a once-in-a-lifetime issue, but rather a recurring one.

Despite the General Assembly’s longtime aversion to climate science, many state officials are acknowledging that we’re in a new era now, and Gov. Roy Cooper is calling for a recovery effort that’s heavy on building “resilience.” What he’s talking about will include measures that help our infrastructure resist the heavy flooding we’ve seen twice in the past two years. That could include raising roadbeds and bridges above the flooding levels we saw last month, and other measures that would keep overflowing rivers and streams from disrupting key transportation routes — such as I-95, which came up short in resilience last month.

The DOT will hold public meetings on both of its I-95 projects later this month, where residents can see maps and talk with the department’s representatives.

The two projects will cover about 25 miles of the roadway and will cost an estimated $700 million. They’ll be the first major upgrade since the highway was designed — a process that began during the Eisenhower administration. It’s no exaggeration to say that this is a long-overdue modernization.