My Turn, Bruce LaRue: Include me out, Mr. President 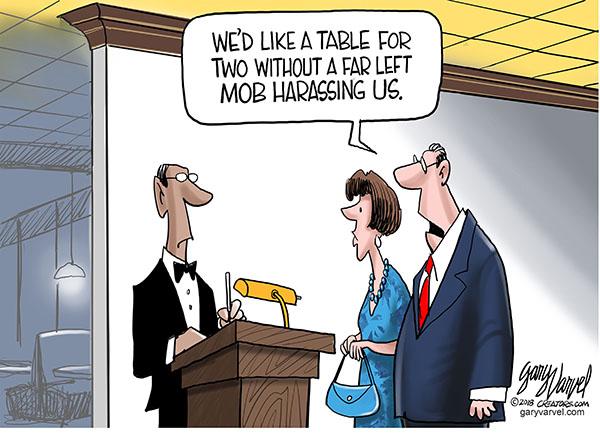 In the unlikely event that my name has found its way onto any lists of potential appointees to a position or office within your administration, particularly one requiring approval or confirmation by the Senate or House of Representatives, I hereby respectfully insist you have it removed immediately.

Although it would be a great honor and unique privilege, as well as a fulfillment of civic duty to serve one’s country in some capacity that might advance the cause of Americanism by beating back the assault on liberty being waged by the Huns of social progressivism, I am thoroughly convinced by recent events that not only would I not sail through even a cursory vetting process, I would almost certainly be taken away in handcuffs.

Should the language and behavior from my distant past somehow fall through the cracks in the early stages, only to resurface when I find myself face-to-faces with a committee armed with probing questions and wickedly clever comments brilliantly crafted by staffers much smarter than their bosses, a sort of intellectual Weekend at Bernie’s, I hate to think of the emotional carnage.

Were I to walk into such a session and spot Nancy Pelosi, Maxine Waters or some other member of the Screeching Harpy Caucus, I am certain I would take my leave to avoid adding yet another incident to the aforementioned language/behavior history.

Why would I allow myself to be tormented by people who despise me without knowing me, and whose supporters will vociferously dismiss me as unqualified based on my age, skin tone, assumption of privilege, and their irrational, hate-filled rage toward you, Mr. President?

Should my appointment require an appearance before a Senate committee, I should not make myself very comfortable; It will not last long, especially when either Senator Durbin or Senator Harris forcefully and repeatedly insist that I immediately request an FBI investigation concerning accusations leveled at me. I am weak; I would not be able to resist.

“Let me see if I have this straight. You expect me to sic the FBI on myself?” Then, leaning a little closer to them, and in my best Sam Elliot drawl, “You’re a special kind of stupid, aren’t you?”

Then there are the protesters. My personal favorite is the one holding a hand-written sign proclaiming, “Purjury is illegal.” How could I not pay this chap a visit and ask something akin to, “What happened, Shakespeare, did your crayon not have Spellcheck?”

It is shamefully irresponsible to disrupt Senate or House proceedings, to hound elected officials in hallways and elevators, spit in their faces, or otherwise invade his or her personal space. If some mind-numbed troll were to spit in my face or disrupt my family dining experience, someone is going to jail, probably me.

This candid admission should serve as sufficient evidence of a lack of the kind of temperament necessary for a White House appointee. I do not worry that any cluster of chronic protesters might harass me or my family at home. This is not a D.C. suburb; it is western Rowan County, North Carolina. No TV cameras. No Capitol police to protect them from the object of their disaffection. They may be a warped, misguided basket of committables, but even they aren’t that dumb.

Thank you for your attention in this matter. I remain available to help this administration in some behind-the-scenes capacity. For example, I would be honored and elated to help write that speech detailing the reasons why you have chosen not to seek re-election in 2020. As always, please stop tweeting.