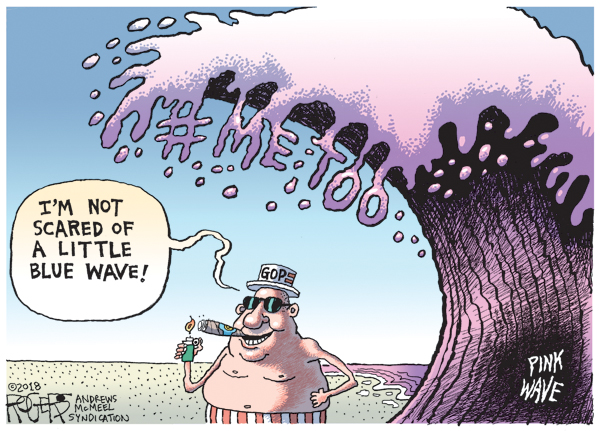 Leonard Pitts: ‘The Republican Party has clearly lost its way’

The other day, a woman confessed to me that she’s a Republican.

Republicans may bristle at the verb, but it’s used advisedly. The lady admitted her party affiliation the way you would some personal failing. “I don’t tell a lot of people,” she said, “but . . .”

In fairness, her reticence might have been in part because we met in a blue state. But she also made clear her disenchantment with the GOP on its own merits — or lack thereof. And who can blame her? In genuflecting before a rabid rabble of vulgarians, hyper-nationalists and flat-out bigots — the “base” — her party has embraced stealing Supreme Court seats, “alternative” facts, alienating allies, kissing up to enemies, “good people on both sides,” tax breaks for billionaires — and Donald Trump. It has become a moral train wreck.

She’s hardly the only Republican who feels estranged. Another woman told me, “The Republican Party has clearly lost its way. Actions speak louder than words in politics. You cannot campaign and say you’re a fiscal conservative when you allow the debt to increase to the degree that it has or to provide the types of giveaways in the tax bill that the Republicans have given away.”

This person was not simply a Republican voter, but a former elected official, Claudine Schneider, a Rhode Island congresswoman who left office in 1991. “I am astounded with the lack of backbone,” she told me by telephone. “My assessment is, the Republicans keep hearing how popular Donald Trump is and I think the House and Senate members are just inclined to go along to get along. … It’s all about holding on to power. It’s essentially, ‘I’ll do whatever it takes to get re-elected.’ “

So Schneider has assembled a group of like-minded former GOP officials, Republicans for Integrity, to hold the party to account. “Though we are lifelong Republicans,” she wrote in a Miami Herald op-ed, “we are urging you to vote only for candidates who will restore the kind of integrity and constitutional accountability that our nation’s forefathers intended.”

And doesn’t the group’s name speak volumes? Like “Jews for Jesus” or “Blacks for Trump,” it’s an implicit acknowledgment that what it describes is a departure from the norm. In “Republicans for Integrity,” then, we have a group of Republicans conceding that integrity has become rather rare in the GOP.

That’s something the party has yet to face. One recalls Sen. Lindsey Graham, in the Brett Kavanaugh Supreme Court confirmation hearing, yelling at his Democratic enemies — another word used advisedly — about their supposed willingness to do anything to achieve their goals. “Boy, y’all want power,” he sneered. “I hope you never get it!”

It was a moment of sheer moral disconnect that brought to mind a verse from Matthew: “Why do you look at the speck of sawdust in your brother’s eye and pay no attention to the plank in your own?”

Republicans should heed that injunction. Especially given that it comes not just from “leftists,” “libtards” and “Demwits,” but from inside their own tent. Party stalwarts such as George Will, Jeff Flake and Bill Kristol have all complained about the stench of rotting elephant. Now “Republicans for Integrity” is a thing.

“I don’t tell a lot of people …” the woman said. And it was sobering.

“I’m a Republican” should not be something you confess.

My Turn, Bruce LaRue: Include me out, Mr. President

Dear Mr. President, In the unlikely event that my name has found its way onto any lists of potential appointees... read more