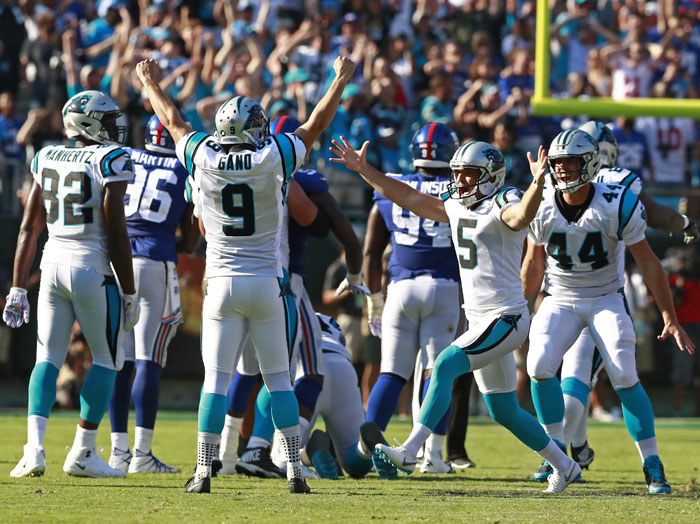 CHARLOTTE (AP) — Maybe Panthers coach Ron Rivera should allow his special teams to run out of the tunnel more often for pre-game introductions.
Graham Gano connected on all four field goal attempts, including a career-long 63-yarder with 1 second remaining, and Carolina recovered a muffed punt in the end zone for a touchdown to beat the New York Giants 33-31 in a wild game Sunday.
“Piece of cake,” Rivera joked after Gano’s winning field goal, which tied for the second longest in NFL history.
Gano’s winning kick came after the Giants erased an 11-point fourth quarter deficit. Eli Manning hooked up with Saquon Barkley on a 15-yard touchdown pass down the right sideline — the rookie made a long dive into the end zone — to put the Giants in front 31-30 with 1:08 remaining.
Gano’s previous career long was 59 yards. He’s now made 35 in a row at home dating back to 2016.
He said running out of the smoky tunnel before the game for the first time in his career was “pretty special” and made him feel like Cam Newton. But the winning kick was even better.
After he converted the kick he said his main goal was seeking safety from the rest of his teammates running after him.
“I just tried to hit a good ball and the rest was craziness and madness,” Gano said. “I’m so excited for our guys.”
It’s the second year in a row the Giants (1-4) have been beaten by a monster field goal at the end. In the third game last season, Jake Elliott of the Eagles kicked a 61-yarder for a 27-24 win.
Newton threw for 237 yards and had two touchdowns and two interceptions and helped get the Panthers (3-1) into field goal range with a 20-yard completion to D.J. Moore and a 9-yarder to Christian McCaffrey on the final drive.
Newton called it a “subpar” game on his part, but was thrilled Gano helped bail him out.
“A wise man told me once that a great quarterback is only as good as his kicker,” Newton said. “Graham put the whole team on his back today. … well, on his toe today.”
Manning finished 22 of 36 for 326 yards with two touchdowns and two interceptions, both by Panthers 37-year-old safety Mike Adams.
Odell Beckham Jr., had a big game as a receiver and passer. Beckham had eight catches for 131 yards and a touchdown and also threw a 57-yarder to Barkley for New York’s first touchdown.
“I’m proud of everything we showed today,” said Beckham. “We just came up short.”
Beckham had one big mistake in the first half that cost his team.
Instead of fielding Michael Palardy’s punt at his 5, Beckham went to block a Carolina player. The ball hit off his leg and two other Giants had a chance to recover the loose ball before eight-year veteran special teams player Colin Jones recovered in the end zone for his first career score and a 14-3 Carolina lead.

BECKHAM’S COMMENTS
Beckham said he addressed his Giants teammates before the game about comments he made about Manning and the offense this past week. He said things had built up inside of him for several weeks and that his comments “came out the wrong way.”

SAMUEL’S RETURN
The Panthers got another weapon back on the field and he made an immediate impact. Curtis Samuel, a second-round pick in 2017, turned a wide receiver screen into a 25-yard touchdown in the first quarter in his first game since undergoing a minor heart procedure. The speedster, 5-foot-11 and 195 pounds, showed some toughness by breaking three tackles to get into the end zone.

UP NEXT
Giants: Host Eagles on Thursday night.
Panthers: Visit Redskins next Sunday.