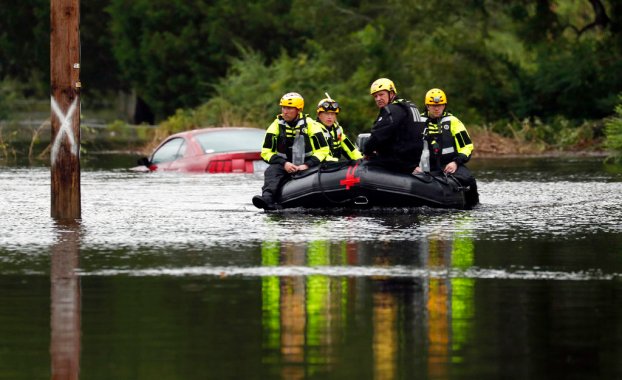 TRENTON — A few days after Hurricane Florence, home and business owners in Jones County began an unpleasant task: Cleaning out soggy, smelly flooded buildings and piling their merchandise, furniture and personal belongings outside on the curb.

In an ideal world, filing an insurance claim would replace what’s lost and get life back to normal in Trenton and Pollocksville, two quaint towns of about 200 people along the Trent River near New Bern. But as I chatted with shopkeepers and residents, one thing became apparent:

“None of us had flood insurance,” said Luke McKinney, who before the storm sold folk art at Trenton’s The Rag Bag.

“That was an oops,” said Paige Hamilton, the town’s pharmacist.

The lack of flood insurance surprised me, because many of the same buildings in Trenton had taken on water during Hurricane Floyd in 1999. But Floyd didn’t change the calculus for insurance purposes.

“We’re not in a flood plain,” said Jennifer Brison, a mother of six who lives a few blocks from the river. “Most people here can’t get flood insurance.”

Brison got lucky — the rising water stopped just before it reached her front door. “I laid my knees down and cried to the Lord to save what I have,” she told me. But others in Jones County and across Eastern North Carolina aren’t yet sure if they’ll get assistance to rebuild.

Without flood insurance, many will look to the state and federal government to help. That money can take years to arrive — just ask the people still waiting on federal dollars to repair homes from Hurricane Matthew two years ago.

In Trenton, the difference between insurance and uncertainty comes down to a line on flood maps. Buildings closest to the river are in a 100-year floodplain — where flood insurance is typically required.

But a few steps closer to downtown, the maps show a 500-year floodplain. Buildings that the government estimates would only flood twice in a millenium often don’t require flood insurance.

Now that several of North Carolina’s 500-year floodplains have flooded twice in 20 years — or twice in two years — we know that label is worthless. Climate change is bringing wetter, more frequent hurricanes, and there’s a decent chance we’ll see another “500-year flood” in our lifetimes.

Fortunately, the state has improved its flood mapping data since 1999, and detailed maps are available online at fiman.nc.gov. Simulations can show you each building that would flood with each inch of rising water from a nearby river or stream.

“Many people think they’re safe because they’re outside of that 1 percent chance line,” said John Dorman, who leads the state’s flood mapping program. But he points out that the line is “just a federally required line to determine if you have to buy flood insurance. We all are at some sort of risk — the question is are we at a high, low or medium risk?”

Dorman says the current flood maps proved accurate during Florence, and the models will be updated again for areas that flooded. But he says reviewing the frequency level — is a 500-year flood zone really a 50-year flood zone now? — is “a discussion that needs to be had.”

There’s no doubt that more people should be required to buy flood insurance. That will ease the burden on the government to fund future rebuilding efforts. And home and business owners can make more informed decisions about where to locate, as higher insurance costs will encourage more construction on higher ground.

In the meantime though, Trenton and many of its neighbors are going to needs billions in government funds to get back to normal. Let’s hope they take advantage of the flood mapping data to build back in a way that lessens the damage next time.

Leonard Pitts: ‘The Republican Party has clearly lost its way’

The other day, a woman confessed to me that she’s a Republican. Republicans may bristle at the verb, but it’s... read more