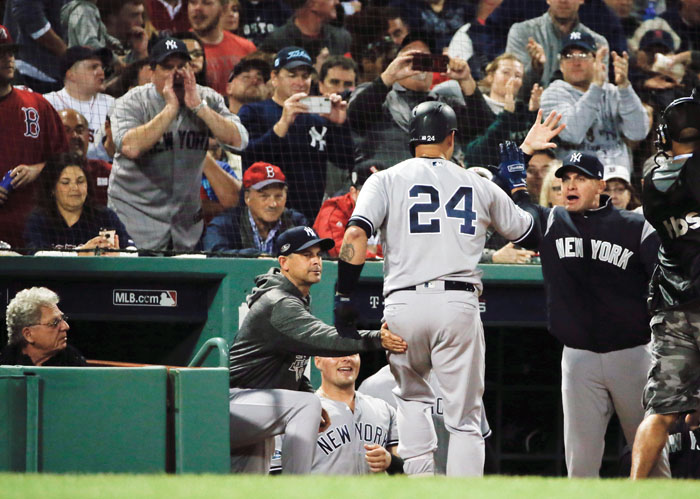 Gary Sanchez did him one better.

The Yankees catcher, who tested his manager’s confidence with a sub-.200 batting average and poor defense for most of the season, hit two homers, the second a 479-foot shot clear out of the ballpark that sent New York to a 6-2 victory over the Boston Red Sox on Saturday night and tied the AL Division Series at one game apiece.

One night after Chris Sale earned his first career playoff victory, Price failed in his 10th try to win a postseason start and was booed off the field after five outs by a sold-out Fenway Park crowd hoping to see the AL East champions protect the home-field advantage they earned with a franchise-record 108 regular-season wins.

Instead, the wild-card Yankees will have a chance to advance to the AL Championship Series with victories at home, where they are 7-0 over the past two postseasons, in Games 3 and 4 on Monday and Tuesday nights.

Game 5 would be back in Boston on Thursday, if necessary.

Judge’s homer, estimated at 445 feet, landed in the back row of seats above the Green Monster, high above the 379-foot marker and about 10 feet to the left of the pole flying an American flag blowing straight out. It was the longest homer of the postseason — until Sanchez’s second homer, aimed in the same direction, sailed clean out of the park and onto Lansdowne Street.

Just a few feet away from that spot is a plaque noting that only six home runs in the 106-year history of Fenway Park have cleared the back wall on the other side of the flag pole. The last was by Jim Rice in 1975.

Sanchez also had a solo shot in the second inning to give New York a 2-0 lead. Price then walked back-to-back batters with two outs and gave up Andrew McCutchen’s RBI single on what could be his last pitch in a Red Sox uniform.

HOUSTON (AP) — Justin Verlander and Gerrit Cole have been even more brilliant in the playoffs, keeping Cleveland’s powerful offense in check to give the Houston Astros a 2-0 lead in the AL Division Series.

Cole struck out 12 and walked none, combining with two relievers on Houston’s second straight three-hitter in a 3-1 victory Saturday.

“There’s no doubt we expect to be good, but this is a team effort,” Cole said. “So, we expect to keep our team in the ballgame. I don’t know about all the personal accolades or all the dominance or that kind of stuff, but we just want to put up a fight.”

Next up: 2015 AL Cy Young winner Dallas Keuchel will oppose Mike Clevinger in Game 3 of this best-of-five series on Monday in Cleveland.

Francisco Lindor hit a third-inning homer for the AL Central champion Indians, who have three runs in the two games. Cleveland is batting .100 (6 for 60) following a regular season in which the Indians ranked second in the majors with a .259 average. Jose Ramirez, Edwin Encarnacion and Josh Donaldson have combined to go 1 for 22.

“This is one of the best offenses in the league,” manager AJ Hinch said. “They can do damage. They can put long at-bats together. (Cole) used all his pitches. He was creative. What else can I say? He was awesome.”

Gonzalez put the Astros ahead in the sixth with the third of his four hits, an opposite-field double to right off usually reliable reliever Andrew Miller.

“With a one-run lead, and with Gonzalez coming up the way he had swung the bat against him prior and Andrew’s history, I felt really good about it,” manager Terry Francona said. “Didn’t work out the way we obviously planned.”

Bregman homered against Trevor Bauer in the seventh, and the World Series champions moved within a win of a second straight trip to the AL Championship Series.

Cole allowed one run and three hits in seven innings, joining Tom Seaver (1973) as the only pitchers to strike out at least 12 batters without a walk in a postseason game.

Ryan Pressly got two outs, and Roberto Osuna walked one in a four-out save.

Jose Altuve singled leading off the sixth but slipped as he left the batter’s box and was limping after reaching first base. Hinch and a trainer came out to check on Altuve, who remained in the game.

Bregman walked and one out later, Cleveland brought in Miller, the dominating left-hander who was MVP of the 2016 AL Championship Series but has been slowed by injuries this year.

The switch-hitting Gonzalez turned around and hit right-handed. He fouled off a slider, then doubled on a fastball. Gonzalez, who hit a career-best .303 last season, has struggled this year hitting just .247.

“It was a tough season for me on the offensive side … but I’ve been putting in a lot of work and it felt good today,” Gonzalez said.

Miller had allowed just one previous inherited runner to score in the postseason, on a sacrifice fly by Boston’s David Ortiz in Game 3 of the 2016 AL Division Series.

Miller walked Carlos Correa on four pitches and loaded the bases with an intentional walk.

Bauer, a starter pitching in relief for the second straight day, retired Evan Gattis on a popout and struck out Martin Maldonado.

Cole retired 13 of 14 after Lindor’s homer, striking out the side in the fourth. After fanning Ramirez on three pitches to end the sixth, Cole screamed and pumped both arms as he walked off the mound.

Houston leadoff hitter George Springer went 1 for 4 with a single, ending a streak of five straight postseason games with a home run — one shy of Daniel Murphy’s record.

Now he and the Astros head to Cleveland hoping to set a different kind of mark by becoming the second team in franchise history to reach the championship series in consecutive seasons.

“We’re going to try to finish it on Monday,” Gonzalez said. “That’s the mentality that everybody has in the clubhouse.”

Osuna, acquired from Toronto in July, has pitched 11 1/3 scoreless innings in the postseason. The streak spans nine games, including six in a row against Cleveland. He’s converted all three save chances in the playoffs and each of his three saves have been more than three outs.

Francona on his team’s mindset heading into Monday’s elimination game: “Show up on Monday and play for our baseball life. Nobody wants to go home. So, try to keep this thing going.”

The 2012 AL Cy Young Award winner — and two-time runner-up for the award — Price signed a seven-year, $217 million deal to come to Boston as a free agent before the 2016 season and has pitched like an ace at times in the regular season. But his postseason struggles have caused Red Sox fans to sour on him, and vice versa; he can opt out of his contract after the season, and if he can find something close to the four years and $124 million he is owed, he might just take it.

In all, Price was charged with three runs on three hits and two walks in 1 2/3 innings — the shortest playoff start of his career, and tied with Roger Clemens for the shortest in Red Sox postseason history. It was the first time in 299 regular-season and postseason starts that Price failed to strike out a batter.

“I just want to win. That’s it,” Price said. “My main goal is to win in the playoffs, to win a World Series. … And whatever I need to do to help us do that, I’m fine with. But I know I’m more than capable of winning games as a starter in October. That’s what I look forward to doing.”

Masahiro Tanaka allowed just three hits, including Xander Bogaerts’ solo homer, before leaving after five innings with a 3-1 lead. He struck out four and walked one.

Red Sox reliever Ryan Brasier had words with Sanchez in the fifth, when the Yankees catcher stepped out of the box to think about the 1-2 count against him. Brasier motioned impatiently for Sanchez to get back in the box, and told him so in some impolite terms.

Sanchez struck out on the next pitch, a 97 mph fastball. But when he came up again in the seventh, he broke the game open. Sanchez had three multihomer games in the regular season, none after May 19.

The teams have Sunday off before resuming the series in New York on Monday night. Luis Severino is scheduled to pitch for the Yankees against Rick Porcello or Nathan Eovaldi.