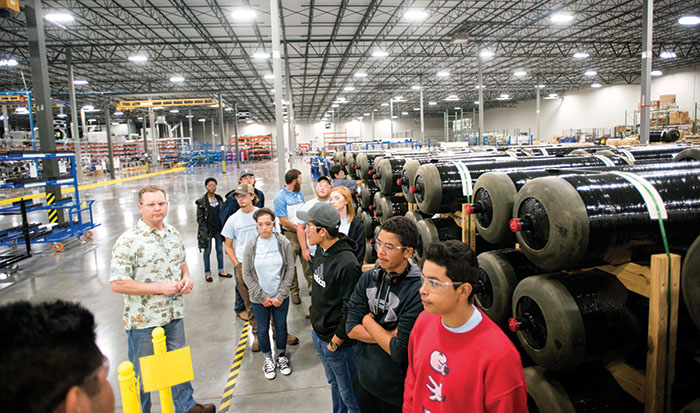 JON C. LAKEY / SALISBURY POST Quality Manger Steve Miller (left) shows the students the tanks that will hold the Compressed Natural Gas for the fuel systems that are installed on trucks. Students from West Rowan high school in the Ag Mechanics 1 class got a tour of the new Agility Fuel System facility during the 2016 Manufacturing Day. Agility Fuels Systems builds fuel systems for large class trucks to operate on compressed natural gas as a fuel source instead of the gasoline and diesel fuel. Friday, October 7, 2016, in Salisbury, N.C.

Mandy Mills, career and technical education director for Rowan-Salisbury Schools, said the tours provide a look into what manufacturing has to offer.

“We try to line up all different high schools to go to as many manufacturers as we could this whole week,” Mills said. “We’re trying to change the perception that’s out there.”

“We put a presentation together for them about us, about what we do, about who we are,” Hebbert said. “Sometimes (when) people think of manufacturing, they don’t think about robots. … So we try to include that and show those things when we go through our facility. It’s a team effort. We have support from everybody, but it’s always fun to have them come through.”

During a presentation ahead of the tour, CSP Salisbury advertised that it is hiring for positions in management, maintenance, engineering, quality control, press operations and mold technology, starting at $12 an hour. Mills said the students get excited about the pay.

“A lot of times, what they talk about is how much they could make,” Mills said. “The opportunity is there. They see that, and they hear the dollars.”

Hebbert said plant workers must be 18 years old. He said CSP is currently looking for 30 employees.

“It’s really exciting to see those jobs coming back,” Hebbert said. “The issue that we have, and I’m sure all companies around this area are having, is the fact that we’re trying to get great people in the door. And with the economy booming, that tends to be a lot more difficult now than it was a year and a half ago.”

Hebbert said she’s aware there is a slight fear about manufacturing layoffs, but the company has begun to reach out to the community to show that the industry is changing.

“With all the things that have happened during that 2007 period, you have a lot of people that were laid off. A lot of manufacturing went overseas. But I think people are seeing those jobs come back,” Hebbert said. “Even in manufacturing, a lot of the jobs are coming back, and not necessarily the same ones. You have the robots out there. You’re talking about automation people. You’re talking about a lot of different roles as well. It’s exciting for me, someone who has been in the manufacturing field for many, many years.”

Mills said generally, the students are not worried about the layoffs, but their parents are.

“I would say their parents would probably push them away from manufacturing, because they have that worry,” Mills said. “We truly think manufacturing is coming back, and if you talk to any manufacturer in the county, they all worried about, one, their aging workforce and then, two, finding enough qualified people who are willing to do the work.”

“Rowan County is a great place for just where we are, on the I-85 corridor. And our land and buildings are less expensive than in the bigger cities, so there’s a lot of manufacturers being drawn here. And we’re trying to make sure that they have the workforce, because they don’t want to come here if they don’t have the workforce,” Mills said.

About 330 career and technical education students toured a manufacturing plant.

According to the Rowan County Economic Development Commission, the manufacturing industry employs 7,451 people here, paying a weekly average of $1,057.