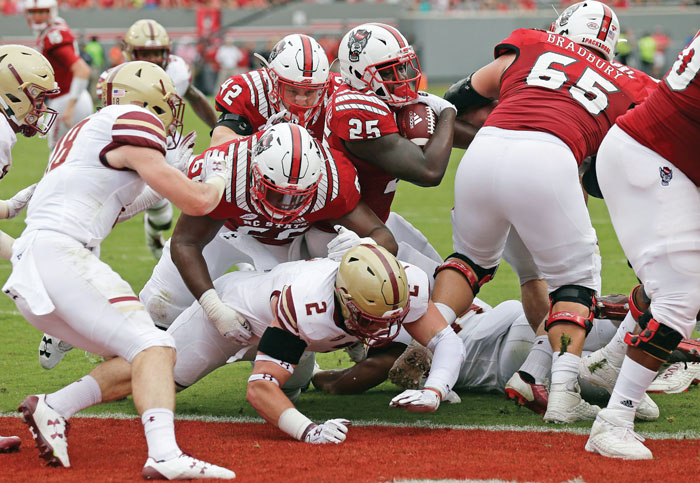 RALEIGH (AP) — North Carolina State went from dominating Boston College on both sides of the ball to frittering just about everything away — first momentum, then nearly all of a big second-half lead — in a suddenly close finish.

And yet, the 23rd-ranked Wolfpack stayed unbeaten.

There were plenty of problems, from four turnovers to having two kicks blocked. And the Wolfpack abruptly went from cruising with a 28-3 lead to needing Ryan Finley to connect on a late third-down passing play to hang onto the ball and run out the clock.

“Really proud of the resiliency of our guys, the toughness and the fortitude they had to finish,” coach Dave Doeren said. “It was sloppy, but it was awesome to find a way to win against a really good team.”

Finley threw for two touchdowns for the Wolfpack (5-0, 2-0 Atlantic Coast Conference), including his scoring strike to Kelvin Harmon for the 28-3 lead with 2:57 left in the third. Yet the Eagles — playing without injured running back AJ Dillion, their top player — responded with 20 straight points, the last being a blocked punt return with 3:33 left.

But the Wolfpack recovered an onside kick, then Finley hit Stephen Louis near the sideline for 21 yards with 1:08 left to send the Wolfpack into kneel-down mode.

“I think we definitely showed that we can handle all the punches,” Wolfpack receiver Jakobi Meyers said.

Ben Glines had a rushing and receiving touchdown for the Eagles (4-2, 1-1). BC had bumbled its way to 109 yards and four first downs in falling behind big, but its offense put up 209 yards in those final 17-plus minutes.

“I thought we adjusted our game without AJ, and I thought we hit a little rhythm,” Eagles coach Steve Addazio said. “I would put that squarely on me because I would say we needed to find that adjustment sooner.”

BC: The Eagles showed two things. First, they’re a very different team without Dillon, the nation’s fifth-leading rusher, who didn’t travel after injuring an ankle last week. They also had enough moxie to rally after three dreadful three quarters.

“I thought we were a team that battled until the end and put ourselves in a position to have a chance to win the game at the end after coming off of an atrocious first half,” Addazio said.

N.C. State: This is the program’s best start since the 2002 team reached 9-0 and made it to No. 10 in the AP Top 25 behind quarterback Philip Rivers, now in his 15th year with the NFL’s Los Angeles Chargers.

N.C. State seems likely to climb a few spots in the AP Top 25 after beating a team that was ranked earlier this season to stay unbeaten.

BC’s rally nearly ended amid a fumble call in which Glines was stripped by Germaine Pratt inside the Wolfpack 5-yard line with 6:09 left. Glines was running amid a standup pile, the kind of play that typically draws a whistle to signal the end of forward progress. But that whistle never came, and the call had Addazio standing on the field while yelling and pointing at the officials.

Ultimately, BC quickly got it back when Travis Levy recovered Mike Palmer’s blocked punt in the end zone.

N.C. State came in ranked third in FBS in third-down conversion rate, then went 10 of 15 against the Eagles. BC converted just 1 of 10.

N.C. State entered with three turnovers before tallying four Saturday: two on Finley interceptions, one a fumbled punt return by redshirt freshman Thayer Thomas and the other a fumbled fourth-quarter carry by freshman Ricky Person.

“He should never have done that,” Doeren said of his quarterback widely regarded as a top NFL prospect. “He should’ve thrown that ball away. That was a poor choice.”

BC: The Eagles host Louisville next Saturday.

College football: Catawba can’t get over the hump