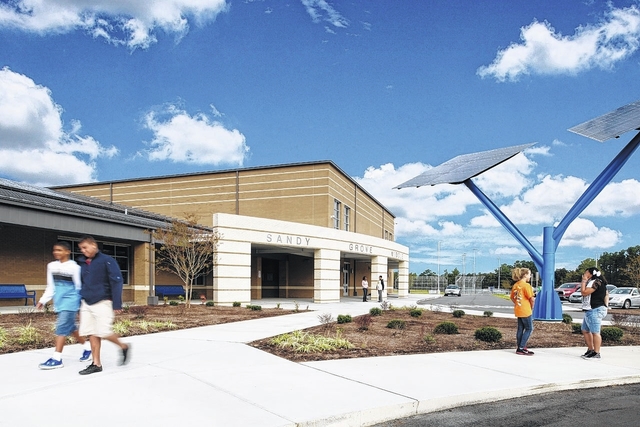 The next Knox Middle School building could be a virtual science lab for students if the design is forward-looking enough.

That is, if the school is eco-friendly enough.

The much-delayed replacement of Salisbury’s only middle school is both a challenge and an opportunity. The challenge is financial, as always; a new facility is estimated to cost $40 million or more. Opportunity comes with the confluence of several key factors: the school’s emphasis on science, technology, engineering and math (STEM), its proximity to the ecological preserve at Catawba College and the Center for the Environment, and the wealth of open space beside Knox. Also nearby is the school system’s science learning center, Horizons Unlimited.

The Knox Center for Accelerated Learning, as it’s called, is well-situated for science lessons. How about making the building itself part of the curriculum by designing it with an eye toward sustainability, efficiency and renewable energy?

Solar panels are an obvious feature, but “going green” can mean much more.

At Discovery Elementary School in Arlington, Va., students can explore the school’s “energy dashboard,” which reports on energy-saving features such as LED lights and super-insulated exterior walls made of concrete-filled foam blocks. The dashboard displays the school’s energy generation and tracks energy use – broken down by lighting, plug load, kitchen and HVAC, all in real time.

In North Carolina, Hoke County opened Sandy Grove Middle School in 2013 with solar panels, high-efficiency lighting and a geothermal climate control system. According to one news report, the school generates 40 percent more power than it uses and sells what it doesn’t need to the power company. The school was a project of SfL+a Architects, the same firm that has worked with Rowan-Salisbury Schools.

All this comes at a price, of course. Solar panels and green design can raise construction costs, but that has to be weighed against future savings. The school system already strives for energy efficiency in all its buildings. Leaders should consider taking those efforts to a higher level at the new Knox in a way that not only conserves resources but also trains future environmentalists.