Clyde, Time Was: If the truth leaks out, no rags can stop it 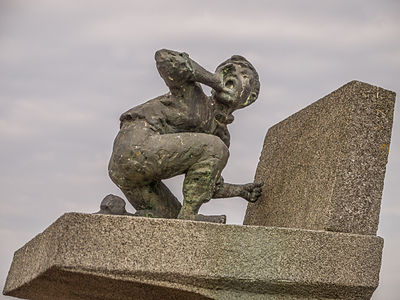 Statues of the fictional dike-plugging boy have been erected in several Dutch locations. Wikipedia

Toilets, radiators, roofs, faucets — or, as we know them, spigots — gutters, balloons, air mattresses, oil pans, seals on lawnmowers or on a Mason jar. If you don’t hold your mouth just right, you could dribble over fresh coconut pie.

One small leak will sink a mighty ship unless you patch it. Bicycle tires were simple to fix, with the kit including glue that not always worked, or was dried up.

Inner tubes are gone now. So are cloth diapers that used to catch a leak if you didn’t take one. Teachers used to think we could wail ’til recess, after learning about osmosis. The sound of water, like a yawn, was contagious. Everybody had to go.

Not until 1865 did Hans Brinker, while not on his silver skates, simply use his finger and his brain to fix a leaky dam in Amsterdam. Smart kid.

How can we stop the outpouring, effusion, exudation and emanating in our world?

How do you stop a leak?

That’s easy; get a bucket and a mop. Find a galvanized bucket without a hole in it, or you’re back where you started. With plastic buckets, you get what you pay for.

Or you could soak it up with a sponge — natural spongia, phylum Porifera, with internal skeletons, namesake of sponge cake.

We all have some sponges hanging around. Can you still buy real ones?

Maybe your aunt used to save her paper towels and dry them out for reuse. That was before recycling. Now we go through rolls.

Hands down, it’s hard to beat the good ol’ fashioned rag. We saved them in a rag bag, under the smelly sink with the plunger.

Funny, the words “leak” and “rag” are both of Norse origin. A “rag” meaning a “tuft” of hair. Not attached, hopefully.

Guess we always had rags, just didn’t know what to call them. Glad rags, dish rags, rag tag, rag dolls, rag-a-muffin, Raggedy Ann and Raggedy Andy, rags to polish our silver service and rags for spilled milk after you cry about it.

Some rags were too good to use. Baby diapers were too sentimental. You had to find the right rag for the right job.

As the old man said, “I’ve got underwear older than that.”

Salisbury housewives know where to hide their rags. By 1953, we had drip-dry shirts and no-iron clothes. Dust rags were used on all those “sit upons” and figurines. Martha said, “I never dust. It may be my ancestors.”

The sound of a leak would drive you crazy. Chinese water torture must be like listening to a Yankee. A leaky heart valve is no laughing matter.

“The ship of state is the only known vessel that leaks from the top,” wrote newspaperman James Reston. Leaks to the press never fail to leave a big puddle with everybody stepping in it.

Funny how the word “drip” sounds like one, if you say it slow with stress on the p. If you aren’t busy deciding on credible witnesses for Supreme Court justice, you could debate whether or not that’s onomatopoeia or just a drop in the bucket.

So, stop your leaks, save your paper towels — 13 billion pounds per year in the U.S. — make your old clothes into rags and use them to plug a few communication leaks.  Or use them to clean up your mess as you complete another trip around the sun.

Isaiah 64:6: “But we are all as an unclean thing, and all our righteousnesses are as filthy rags; and we all do fade as a leaf; and our iniquities, like the wind, have taken us away.”