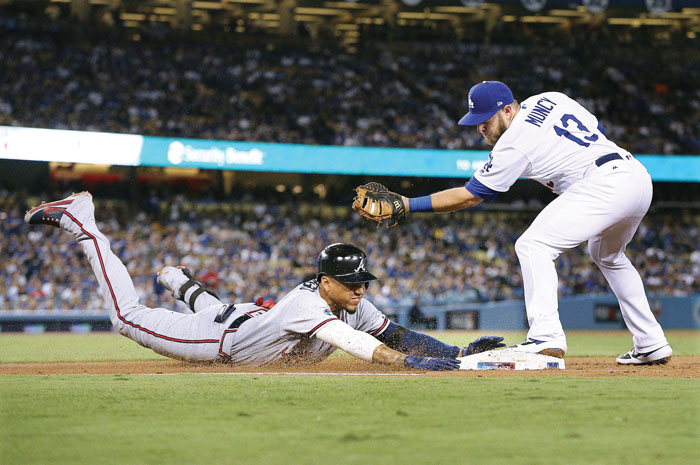 Atlanta Braves' Johan Camargo is put out at first base by Los Angeles Dodgers' Max Muncy on a ground ball to Clayton Kershaw during the fourth inning of Game 2 of a baseball National League Division Series, Friday, Oct. 5, 2018, in Los Angeles. (Curtis Compton/Atlanta Journal Constitution via AP)

By BETH HARRIS, AP Sports Writer
LOS ANGELES (AP) — The Dodgers head to Atlanta full of confidence after consecutive shutouts gave them a commanding 2-0 lead over the Braves in their National League Division Series.
Now the Braves must win the first postseason game in their new ballpark to extend their season. And they face some daunting history: only three times have teams that trailed 2-0 rallied to win a best-of-five playoff series under the 2-2-1 format.
Atlanta was outscored 9-0 and outhit 10-9 in losing the first two games at Dodger Stadium, where Los Angeles slugged five homers.
Game 3 is Sunday night at SunTrust Park, with left-hander Sean Newcomb chosen to start for the Braves instead of Kevin Gausman. Manager Brian Snitker announced the change Saturday.
The 25-year-old Newcomb came within one strike of throwing a no-hitter against the Dodgers at home July 29. He pitched two scoreless innings in relief of starter Mike Foltynewicz in Thursday’s opener.
“We need to win,” Snitker said. “Not that Gausman doesn’t give us that opportunity, we like how Newcomb matches up with them and the success that he’s had against the Dodgers this year.”
The Baby Braves ran into back-to-back dominant pitchers in Hyun-Jin Ryu and Clayton Kershaw in Los Angeles. Atlanta didn’t advance a runner past second base in Game 1 and twice got runners to third in Game 2 but couldn’t score.
“We need to go out there and string some hits together, a couple big innings,” shortstop Charlie Culberson said.
They might be hard-pressed to do that against rookie Walker Buehler, who starts Game 3 for the Dodgers having drawn comparisons to ace Kershaw.
“Obviously, it’s a big spot,” Los Angeles manager Dave Roberts said, “but he continues to kind of surpass all expectations.”
Buehler, a 24-year-old right-hander, last pitched on Monday, allowing one hit in 6 2/3 innings and striking out three in the NL West tiebreaker victory over the Rockies.
“I kind of look at it as like a baby step,” Buehler said about having pitched in a crucial regular-season Game 163. “Obviously, this will be my first playoff game. But 163 has got to be somewhere between a regular game and a playoff game. I’m just kind of going with the same game plan and try and stay under control.”
Snitker acknowledged he can’t do much more than juggle his lineup because the Braves’ bench is thin.
“I don’t know that moving guys around, giving them different looks in the lineup when you’re swinging the bats like we are is even the answer,” he said, “but we’ll try something a little different.”
The Braves closed the regular season with three losses in their last five games, managing just one run in those defeats.
“We’ve got to start scoring some runs and hopefully we can do that in front of our home crowd,” said first baseman Freddie Freeman, who was 1 for 8 with two strikeouts in the first two games.
Braves leadoff hitter Ronald Acuna Jr. fared only slightly better, going 2 for 8 with two strikeouts. Center fielder Ender Inciarte went 2 for 6 with two strikeouts, while cleanup hitter Nick Markakis was 1 for 7 with two strikeouts in the two losses.
“This team’s better when we’ve had our backs against the wall,” Inciarte said. “We’ve shocked a lot of people already — we can do it again.”
The Braves are back in the postseason for the first time since 2013, having won 90 games in earning the NL East title earlier in their rebuild than most projected.
However, the Braves are 1-8 in playoff series when they lose Game 2. Their lone victory came in the 1996 NLCS when they lost to St. Louis and came back to take the series in seven games.
“We’ve still got chances,” Culberson said. “We just need to take a deep breath and go out there and try to have fun.”
___
More AP MLB: https://apnews.com/tag/MLB and https://twitter.com/AP_Sports