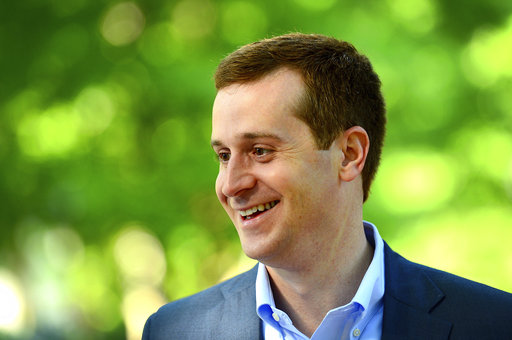 CHARLOTTE — There’s an unusual political commercial running these days around Charlotte  showing a candidate being baptized with water from the Euphrates River while serving as a U.S. Marine in Iraq.

The candidate is Dan McCready, who’s running for the U.S. House of Representatives as a newcomer and moderate Democrat against Mark Harris, a Baptist pastor and Christian evangelical leader. One of the stars of the Democrats’ class of challengers for Republican-held House seats in the November midterm election, McCready is inoculating himself against the customary charge from the religious right that Democrats are anti-faith left-wingers.

He won’t win over many white evangelicals, who comprise about a quarter of the voters in the contested district, a W-shaped slice of territory that zigzags eastward from affluent sections of Charlotte to impoverished counties along the border with South Carolina. But he’s not letting the other side define him.

In another ad, he says he won’t vote for Nancy Pelosi for House speaker. That addresses a national Republican talking point in a gerrymandered district drawn to give Republicans an advantage.

McCready is a 35-year-old graduate of Duke University and the Harvard Business School and a Marine combat veteran who launched an investment firm to provide financing for solar power for North Carolina farms. Harris is a champion of the hardcore social conservatism favored by the religious right.

Politically active evangelicals have a lot at stake in the race. They delivered the state for President Donald Trump in 2016. Harris was the first challenger this year to knock off an incumbent Republican in a primary. A former president of the North Carolina Baptist Convention, he led a move to ban same-sex marriage (even though the U.S. Supreme Court ruled it to be a constitutional right) and promoted his state’s infamous bathroom law prescribing which facilities transgender people could use, a measure that collapsed under pressure from the business and athletic communities.

“This is a bellwether election for the evangelical community,” said Andy Yates, a consultant to the Harris campaign. “It’s an opportunity to elect someone everyone knows is a real evangelical.”

Harris talks about the economy and tax cuts on the stump, but his campaign is aimed at producing an outpouring of Christian right voters motivated mostly by social concerns.

They’re always an important force in North Carolina, but there are other powerful currents at work this year: women, the #MeToo movement and Trump. There’s a widely circulated video of a Harris sermon five years ago in which he said that women should “submit” to their husbands. He has questioned whether a professional career is the “highest pursuit” for a woman.

Harris contends that he’s being attacked for his faith. He says the sermon wasn’t a call for women to “be barefoot and pregnant,” and later told the Charlotte Observer that a woman’s “core calling” is to “be a helper to her husband and mother.”

Several hundred people showed up the other night for a McCready event at Sycamore Brewing in Charlotte, including Beth Buddo, a retired teacher and political independent.

“Mark Harris is a woman’s worst nightmare,” she said.

Beth Monaghan, an accountant and Republican who ran, unsuccessfully, for the state legislature, was worried about something else: too much party loyalty.

“Those of us in the middle have to get rid of this division,” she said.

McCready cites his military service as a calling card for reaching out to independents and Republicans. He likes to put it this way: “I never heard an order, ‘Democrats you take that hill.'” Like several other veterans who are newcomers to politics, he’s raising lots of money and will outspend Harris by a 2-to-1 margin.

His economic message is standard mainstream Democratic: don’t cut Medicare or Social Security, give tax cuts to the middle class instead of the rich and bar health-insurance companies from charging more to people with pre-existing medical conditions. His background in the solar-energy business may provide a timely advantage running against Harris, a climate-change skeptic, just weeks after Hurricane Florence inundated the eastern part of the district.

Over coffee at a Panera Bread restaurant, he talked about “finding his faith in Iraq,” while drawing a distinction between his religious values and his opponent’s.

“Mark Harris and I don’t share the same values and vision,” he said, and added, “The more politicians talk about bathrooms, the more they ignore North Carolina’s real problems.”

A man walked up and urged McCready to put up more yard signs and “get out that YouTube sermon.” It was Hugh McColl, the former chief executive of Bank of America and a local business and civic leader.

While McCready is reaching out with a “country over party” pitch in hopes of attracting undecided centrist voters on Nov. 6, Harris is doubling down on the base to try to draw more Republican loyalists to the polls. In one commercial, he holds up light blue and dark blue shirts, apparently trying to make a point in this basketball-crazed state about the difference between the University of North Carolina and McCready’s liberal alma mater, Duke.

It’s a strange pitch, since so many of Harris’ religious-right constituents consider North Carolina to be as much a redoubt of their left-wing opponents as Duke. But it’s a strange year.

Hunt is a Bloomberg Opinion columnist covering politics and policy. He was the executive editor of Bloomberg News, before which he was a reporter, bureau chief and executive Washington editor at the Wall Street Journal.

Cal Thomas: A victory on trade