A year ago in Vegas, he was shot in a rush to save others 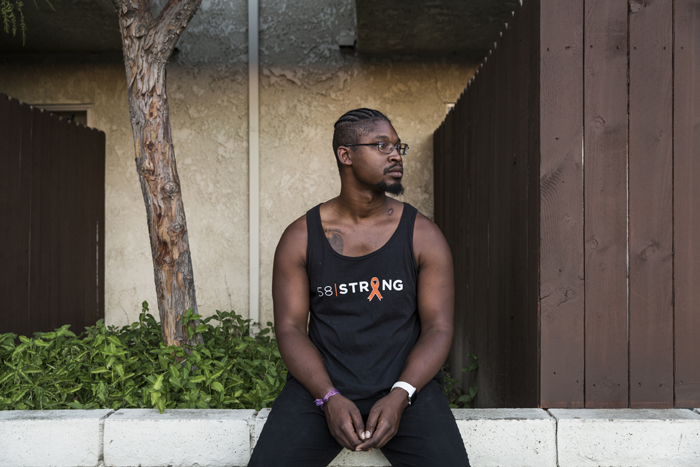 Jonathan Smith outside his apartment building in Buena Park, Calif. Smith survived the 2017 Las Vegas massacre and the bullet hole on his left shoulder is still visible. He returned to the shooting site a year later, part of a long road to recovery. Emily Berl/Washington Post

BUENA PARK, Calif. — The bracelet is still on Jonathan Smith’s wrist, right where he put it a year ago as he entered the Route 91 Harvest music festival on the Las Vegas Strip. It was there when country star Jason Aldean took the stage, when what sounded like fireworks morphed into a shower of bullets, when the blood started to run down his shirt, when he tried to drag concertgoers away from danger, when he almost lost his life.

It’s a tactile talisman now, along with the bullet still lodged in Smith’s chest, between his shoulder and his heart. The bracelet reminds him of being heralded as a hero for running toward the stage to help others and taking a bullet himself. It reminds him of the viral photograph of his recovery in the hospital, of celebrities and strangers reaching out to send him gifts such as a Purple Heart pin he received from a Vietnam veteran.

It reminds him that it could have ended another way.

But there’s so much more no one can see beneath the bracelet: the pain, the emotion, the panic attacks that send him scrambling for a Xanax or pulling over to the side of the road to clutch the black-beaded rosary hanging from his rearview mirror.

The Las Vegas massacre, the worst shooting attack in modern U.S. history, is a year behind Smith and the thousands of others who were there on Oct. 1, 2017, when a man perched high above in the Mandalay Bay hotel turned a concert into a bloodbath. Fifty-eight people died. There is still no explanation why the shooting happened or why the concert was the target.

The concert bracelet has proven a key to Smith’s ability to cope. It reminds him how lucky he is to be alive, and it has brought him in contact with more than a 100 other survivors who have recognized it while he has been out at his son’s football games, at work or running errands. It gives him purpose as he tries to look forward.

“I have been given a second chance at life, but I don’t want to forget my 58 brothers and sisters who died,” said Smith, a 31-year-old father of three, a printer and copier repairman who is now pursuing a career as a police officer. “I’m not going to let Vegas break me.”

Smith is returning to Las Vegas this weekend, getting up the courage to drive down the Las Vegas Strip again, determined to look up at the Mandalay Bay’s gold facade and make some kind of peace with everything that has happened since. Though there is a memorial concert planned in Las Vegas — the attack happened a year ago Monday — Smith is shunning the formal activities because he doesn’t want to be used as a prop.

Instead, he’s spending as much time as he can with those who lived through the massacre.

“My country family helped me on the days I didn’t even want to walk out of the house,” Smith said. “We’re all dealing with the same demons, but as a whole, we can pull through anything.”

There are more than 20,000 survivors of the attack, and many have united in the year since, forming Facebook groups, text chains and meeting up in person. Here in southern California, where Smith lives, dozens of them regularly come together at Old Crow Smokehouse in Orange, California. Smith often ends the gatherings hugging everyone and telling them: “You’re my family. I love you.”

Smith discovered country music about six years ago and started attending concerts with friends, relishing an expanded personal playlist that ranges from country acts like Aldean to the DJ Quik hip-hop song he recently played in his car. He and his friends managed to score tickets to the Aldean concert last October, thrilled to be able to see the headliner of the Route 91 festival in Vegas.

As they navigated the nighttime crowd, the group maneuvered toward the stage. They were celebrating the 43rd birthday of Louis Rust, Smith’s friend, and belting out Aldean lyrics.

With Aldean on stage, there was a sudden popping noise, what sounded to Smith — and many others there that night — like fireworks. It was about the time when Aldean fled the stage that Smith realized what was happening.

Bullets were hitting people in the crowd around him.

Rust told everyone in their party of nine to hold hands and run. They fled, but Smith broke ranks and ran back toward the stage, grabbing people and urging them to run, shouting, “Active shooter, active shooter, let’s go!”

“I wasn’t thinking about my safety,” Smith said. “It was just adrenaline, an impulse to help as many people as possible.”

Then a bullet from above found him: “I couldn’t feel anything in my neck. There was a warm sensation in my arm.”

As blood poured down his chest, he spotted Meagan Baedeker, who had a hip injury and was standing with her friend when the shooting began; they dropped to the ground but weren’t sure if Baedeker should try to run, because she was moving so slowly. She remembers a tall man with glasses coming toward her, bending down and telling her to flee. She followed his lead. She says she and her friend are alive because of Smith’s heroics.

“I’ll never forget the look in Jonathan’s eyes as he told me to get out of there,” Baedeker said. “I just felt I needed to listen to him, like he was an authority figure. I felt like he knew what he was doing.”

As Smith was trying to help other concertgoers, his wound continued to soak his shirt with blood. Tommy McGrath, an off-duty police officer who was at the concert with his wife, spotted Smith and stuffed a shirt into his wound. The pair hobbled across the street, where McGrath flagged down a passing red Ford F-150 truck driven by Karen Berney, who lived in Las Vegas and sped toward a nearby hospital.

McGrath and Berney didn’t think Smith was going to make it.

“He was getting tired,” said McGrath, 27, a San Diego police officer. “He had a hard time staying conscious. I went home thinking I had lost another one.”

But Smith walked out of the hospital the next day, and his story quickly spread online. McGrath learned Smith was alive from a photo posted with an internet news story and was able to reconnect with him later that week. The two have been friends since, traveling together to occasional events where they have been honored for their actions that night.

Smith recoils at being called a “hero.” He hides the many awards he’s received, including the Purple Heart pin, in a suitcase and shoebox in his closet.

“I consider Jonathan a hero because he’s a normal everyday person who went above and beyond, taking on the role of a first responder with no training,” McGrath said. “That’s a testament to his character.”

Authorities have not found a motive for the shooting, which a 64-year-old habitual gambler carried out from a high-level suite at the Mandalay, shooting hundreds of rounds down on the crowd for nearly 10 minutes, an arsenal of weapons in his room.

Smith wonders what many others do: How could this one person carry out such a heinous act by himself? “The No. 1 question people ask me is, ‘Was there more than one shooter?’ ” Smith said. He doesn’t know how to answer.

A year later, Smith is focused on healing. The bullet is still in his chest, but physically he feels close to normal; he’s playing softball again. But it’s the mental battle that worries him most.

Doctors say he has post-traumatic stress disorder. He still can’t handle fireworks; when a July Fourth display began over the summer, he apologized to his three kids and ran inside.

His current job requires him to spend hours alone in the car, where he says some of his worst panic attacks have occurred. He tinted the windows on his 2016 Honda Accord as dark as he could to give himself more privacy on the days he breaks down bawling.

Smith spent six months on the couch in the two-bedroom apartment in Buena Park, California, which he shares with his three children, his father and longtime partner, Crystal. He closed himself off to the world.

A GoFundMe campaign that was set up for him raised $84,546, enough to cover his medical bills and pay off his debts — including for technical school. He has enough left over for his family, perhaps enough for a down payment on a home.

He returned to work in the late spring. Some days are good; some aren’t, but he feels he has a purpose now as he works toward becoming a police officer, wanting to be trained for any future tragedy.

During the summer, Smith attended a Los Angeles Angels baseball game with other survivors, and Baedeker, whom he helped save, immediately recognized Smith at a gathering at the Old Crow after the game.

“As soon as I saw him, I knew he was the man who squatted down next to me and was covered in blood and told me to get out,” recalled Baedeker, a teacher in Orange County. “I told him: ‘You saved my life.’ ”

Baedeker says she, too, “found her people” when she got to know other survivors, including Smith. They text now and then, calling it the “best therapy.” She told Smith she isn’t ready to return to the scene of the massacre, but she applauded him for going.

Smith, McGrath and Berney have made plans to meet up in Las Vegas. They reunited once before at a country concert earlier this year. Smith started going again, wearing “Country Strong” gear and surrounding himself with fellow survivors for support. They often are the only people who can understand him.

On days that are especially difficult, he pulls out a letter that a seventh-grade girl sent him. She closed the letter with a Bible verse — Romans 8:18: “The pain that you’ve been feeling can’t compare to the joy that’s coming.”

He plans to get that tattooed on his body after he returns from Las Vegas, somewhere close to the concert bracelet.

The basics of absentee voting