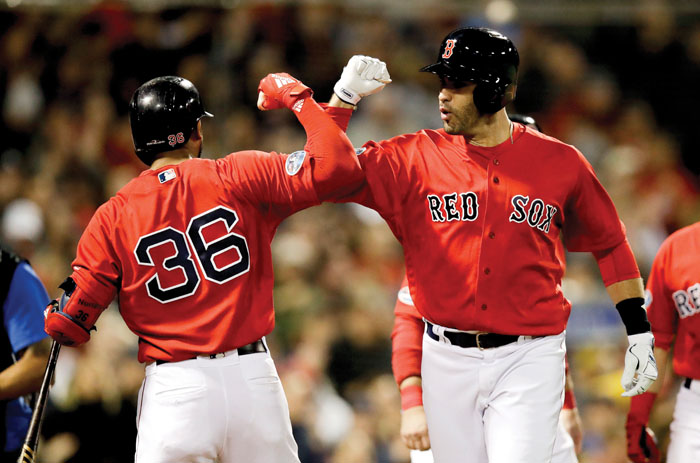 Boston Red Sox's J.D. Martinez celebrates after his three-run home run with Eduardo Nunez during the first inning of Game 1 of a baseball American League Division Series against the New York Yankees on Friday, Oct. 5, 2018, in Boston. (AP Photo/Charles Krupa)

BOSTON (AP) — Chris Sale struck out eight for his first postseason win, J.D. Martinez hit a three-run homer and the Boston Red Sox sweated out their shaky bullpen to hold off the New York Yankees 5-4 on Friday night in Game 1 of the AL Division Series.
One year after he was pounded by Houston in his playoff debut, Sale took a four-hit shutout into the sixth inning. The Yankees loaded the bases in the sixth and seventh, cutting the deficit to 5-3. Aaron Judge homered off Craig Kimbrel leading off the ninth before the Red Sox closer retired the next three batters, striking out Giancarlo Stanton and Luke Voit for the save.
Game 2 in the best-of-five series is Saturday night, with Boston starting another pitcher trying to overcome a history of postseason struggles: left-hander David Price is 0-8 as a starter in the playoffs. He’ll face Yankees righty Masahiro Tanaka.
In the first playoff matchup between the longtime rivals since 2004, the 108-win Red Sox took a 5-0 lead against Yankees starter J.A. Happ and then white-knuckled it after Sale left with two on and one out in the sixth.
New York, which won 100 regular-season games plus the AL wild-card game against Oakland, got three singles and two walks in the sixth, scoring two before Brandon Workman — the only player on the Red Sox roster with a World Series ring — struck out Gleyber Torres to end the threat.
The Yankees loaded the bases with nobody out in the seventh but scored just one run. Boston manager Alex Cora used scheduled Game 3 starter Rick Porcello to get two outs in the eighth before turning to Kimbrel for a four-out save.
It was the first ALDS matchup between the teams and the first in the postseason since the Red Sox staged an unprecedented rally from a 3-0 deficit in the 2004 AL Championship Series to advance and then won the World Series to end their 86-year dynasty of disappointment. (They also met in the ALCS the year before, and it ended with current Yankees manager Aaron Boone’s 11th-inning homer in Game 7, better known in Boston as the game when manager Grady Little inexplicably left a tiring Pedro Martinez on the mound.)
“This is what I envisioned,” said J.D. Martinez, who signed with the Red Sox as a free agent last offseason. “I think this is what MLB and baseball wanted to see, what baseball fans all over the world wanted to see.”
Boston fans were ready, with derisive chants for the Yankees during introductions and again after Martinez smacked a 2-0 fastball into the glove of a stem cell researcher in the front row of the seats above the Green Monster.
The Red Sox made it 5-0 in the third when Mookie Betts doubled off the left-field wall and Andrew Benintendi chased Happ with a bunt single that moved the runner to third. Steve Pearce singled in one run and another scored on Xander Bogaerts’ sacrifice fly.
Sale left with a 5-0 lead after giving up singles to Judge and Stanton in the sixth; both came around to score. In all, Sale was charged with two runs on five hits and two walks in 5 1/3 innings — the longest playoff outing for a Red Sox starter since 2013.
Martinez and Benintendi each had two hits for Boston. Judge had three hits and Voit had two for New York, which went 1 for 7 with runners in scoring position.
Happ lasted just two innings for his shortest postseason start, allowing five runs on four hits and a walk while striking out two.

HAMMY TIME
Aaron Hicks singled off Sale to lead off the fourth — ending an 11-pitch at-bat — but once he got to first base he began flexing his right leg. After a visit from the trainer, he left the game for pinch-runner Brett Gardner.
Hicks, who battled hamstring problems down the stretch, was also late taking center field at the bottom of the first. The team said he had tightness in his right hamstring and was being evaluated.

UP NEXT
Price pitches for the Red Sox in search of his first playoff win as a starter, though he has two wins relief in the postseason. Tanaka pitched seven shutout innings in Game 5 of the ALCS against Houston last year.