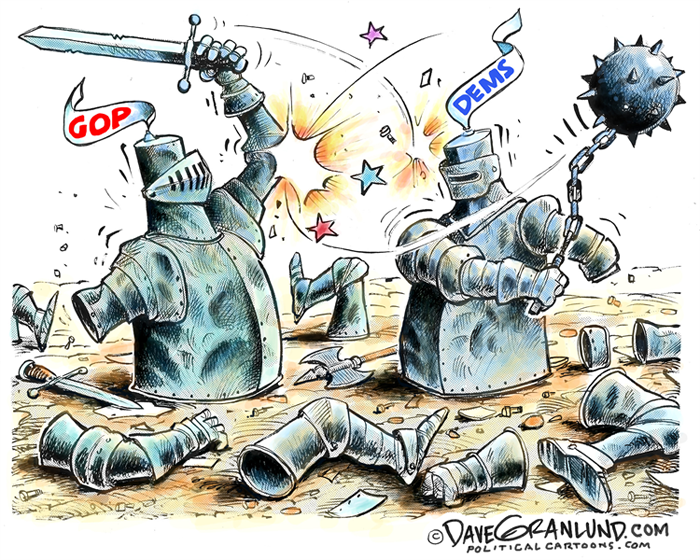 Two days, not even a month apart, reveal a great deal about the vicious and venomous culture gripping Washington today, especially in the U.S. Senate.

On Sept. 1, John McCain’s funeral at the National Cathedral celebrated the tradition of bipartisanship that marked the Arizona Republican’s entire career. McCain traveled the world with Democrats, co-sponsored countless bills with friends across the aisle and asked two of them to deliver eulogies at his funeral: former Sen. Joe Lieberman and Barack Obama — the man who thwarted McCain’s own presidential ambitions.

On Sept. 27, the Senate Judiciary Committee held a hearing on the nomination of Judge Brett Kavanaugh to the Supreme Court. Raw resentment and recrimination between the parties filled the room as senators accused each other of deceit, deception and bad faith.

Lindsey Graham, a South Carolina Republican, reached an apex of animosity when he snarled at the Democrats: “Boy, y’all want power. God, I hope you never get it.”

John McCain, Graham’s old friend, would have wept at those words.

Then something entirely unexpected happened. Two senators stepped out of their trenches, met in No Man’s Land and brokered a brief truce. Republican Jeff Flake of Arizona and Democrat Chris Coons of Delaware persuaded their enraged colleagues to accept a one-week pause in the confirmation process and allow the FBI to explore charges of sexual misconduct against Kavanaugh.

Their action was so stunning because it is so rare in today’s Washington, where compromise, one of the noblest words in the political language, is demonized as betrayal. Flake is Exhibit A, forced to retire because his criticisms of President Trump would doom him in a Republican primary.

On “60 Minutes,” Scott Pelley brought up the deal with Coons and asked Flake: “Could you have done this if you were running for re-election?” Flake responded: “No, not a chance.” Asked why, Flake explained: “There’s no value to reaching across the aisle. There’s no currency for that anymore. There’s no incentive.”

Of course, the compromise immediately showed cracks. Republicans and Democrats feuded over the scope of the FBI investigation and Mitch McConnell, the Republican leader, vowed to press ahead with a vote on Kavanaugh as quickly as possible.

The Senate was returning to normal.

The disappearance of bipartisanship is hardly new. At a prayer breakfast in 2010, President Obama declared that “something is broken” in Washington and lamented: “At times it seems like we’re unable to listen to one another; to have at once a serious and civil debate. … It makes politics an all-or-nothing sport.”

But the long deterioration into tribal warfare is only getting worse. And while there are many reasons behind this trend, one of the most important explanations is the changing nature of the Senate itself. Two vibrant traditions have virtually disappeared: progressive Republicans, many from the Northeast; and conservative Democrats, mainly from Southern and border states.

These were often the dealmakers, the consensus-builders, who bridged the gap between the parties. With their extinction, the center of the Senate has hollowed out. The bridges have collapsed.

Look at two of the most contentious Supreme Court nomination fights in modern memory: Robert Bork in 1987 and Clarence Thomas in 1991. Bork, appointed by Ronald Reagan, was defeated with the help of six Republican moderates, including three from New England: Robert Stafford of Vermont, Lowell Weicker of Connecticut and John Chafee of Rhode Island.

Today, Susan Collins of Maine is the only Republican left in the entire New England delegation. She has shown an occasional willingness to defy President Donald Trump and work with Democrats on some issues, but it’s far harder to act courageously when you’re all alone — a problem her New England predecessors did not face 31 years ago.

Thomas, appointed by George H.W. Bush, was confirmed by two votes with the help of 11 Democrats, most of them Southerners like John Breaux and Bennett Johnston of Louisiana and Wyche Fowler and Sam Nunn of Georgia.

When Pelley asked Coons if the Senate of John McCain still exists, the Delaware Democrat replied, “It has to exist. Our nation can’t survive if it doesn’t exist.”

He’s correct about that, but two days in September show how far the Senate has declined into a toxic waste dump of hostility, badly in need of reclamation and revival.