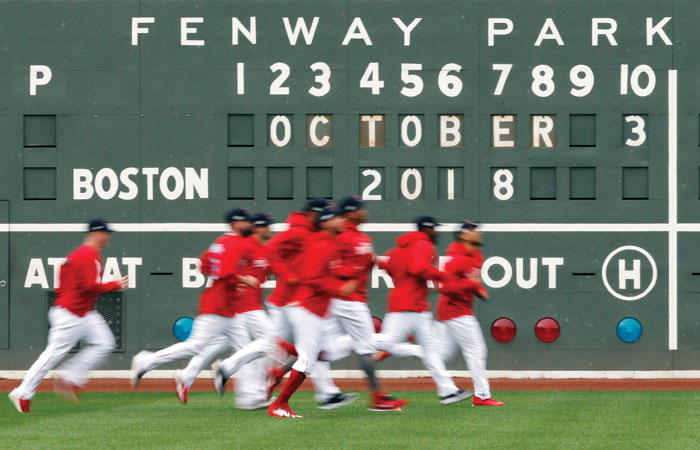 By RONALD BLUM, AP Baseball Writer
NEW YORK (AP) — Fans have been waiting for another one of these rumbles: baseball’s most-bitter rivals set to tangle again, this time as 100-win heavyweights in the playoffs.
Munson vs. Fisk, Pedro vs. Popeye , A-Rod vs. Varitek and earlier this year Brock Holt vs. Tyler Austin .
The Boston Red Sox and New York Yankees back at each other in the postseason for the first time in 14 years.
“We’re a team that can play with anybody, and we’re not afraid to go in there,” Yankees center fielder Aaron Hicks said after a 7-2 wild-card win over Oakland sent New York to a best-of-five AL Division Series that starts Friday in Fenway Park.
Yankees fans were chanting “We want Boston!” during the late innings. The Red Sox tweeted “We want New York” after the final out in the Bronx.
“I think they’re ready and relish the opportunity to go up against the game’s best this year,” Yankees rookie manager Aaron Boone said of his players.
That is the same Aaron Boone whose 11th-inning homer in Game 7 of the 2003 AL Championship Series beat the Red Sox. A year later Boston overcame the Yankees and became the first major league team to bounce back from a 3-0 postseason deficit. The Red Sox went on to win their first World Series since 1918, but Boone’s drive off Tim Wakefield has not been forgotten or forgiven.
Boston was 10-9 against the Yankees this year and set a club record with 108 wins under new manager Alex Cora, boosted by MVP candidate Mookie Betts, slugger J.D. Martinez and ace Chris Sale. New York finished eight games back and became the first team since the 2001 Athletics to reach triple digits in wins and fail to finish first — New York also set the major league mark for home runs, powered by the likes of Aaron Judge and Giancarlo Stanton.
These teams also have a history of hitting each other.
Back on April 11, Austin charged the mound at Fenway after Red Sox reliever Joe Kelly threw at him twice, hitting Austin in the side with the second pitch. Boston players were livid Austin slid spikes-first into shortstop Brock Holt earlier in the game. A bench-clearing brawl led to suspensions and fines, but Auston won’t be around for a rematch — he was dealt to Minnesota in July.
“It’s Yankees-Red Sox. That’s what everybody wants. That’s what they got,” Red Sox star pitcher David Price said then.
Just another in a long history of bad blood between rivals a little more than 200 miles apart.
Boston player-manager Joe Cronin and New York outfielder Jake Powell fought on the field and beneath the Yankee Stadium stands in 1938, and Jimmy Piersall of the Red Sox and Billy Martin of the Yankees brawled beneath Fenway Park’s stands in 1952.
A fight broke out in 1967 at Yankee Stadium after New York’s Thad Tillotson hit Joe Foy with a pitch and Boston’s Jim Lonborg hit Tillotson — who after the scrap hit Dick Howser with a pitch.
In 1973, Thurman Munson crashed into catcher Carlton Fisk at Fenway after Gene Michael missed a bunt, and the All-Stars fought. Then at Yankee Stadium in 1976, New York’s Lou Piniella charged into Fisk at the plate , and Boston pitcher Bill Lee was body-slammed during the fighting and wound up with a broken collarbone.
A notorious brawl took place during Game 3 of the 2003 AL Championship series, when Red Sox ace Pedro Martinez threw 72-year-old Don Zimmer to the ground.
Zimmer, a former Boston manager and then a Yankees coach, ran across the infield and lunged at Martinez during the fighting.
Then the following July, Boston’s Bronson Arroyo hit New York’s Alex Rodriguez with a pitch, A-Rod stared at the pitch as he walked toward first, catcher Jason Varitek got between them and pushed the AL MVP, leading to dugouts and bullpens emptying.
That October the rivals met again in the 2004 ALCS. The Yankees took a 3-0 lead and were one inning from reaching the World Series when Mariano Rivera walked Kevin Millar and pinch-runner Dave Roberts — now the Los Angeles Dodgers manager — stole second. Bill Mueller hit a tying single and the Red Sox won 6-4 in 12 innings when David Ortiz hit a game-ending, two-run homer at 1:22 a.m.
Boston won 5-4 the next day on Ortiz’s RBI single in the 14th inning, won Game 6 in New York 4-2 behind Curt Schilling and his bloody sock, then blew out the Yankees 10-3 in the finale.
“All empires fall sooner or later,” Red Sox president Larry Lucchino said.
Boston swept St. Louis in the World Series, swept Colorado four years later and beat the Cardinals in a six-game series in 2013. Over that same span, the Yankees have won just one title, in 2009.
Fast forward to this week, with the teams ready to meet again.
“It’s going to be intense,” New York pitcher CC Sabathia said.
___
More AP MLB: https://apnews.com/tag/MLB and https://twitter.com/AP_Sports