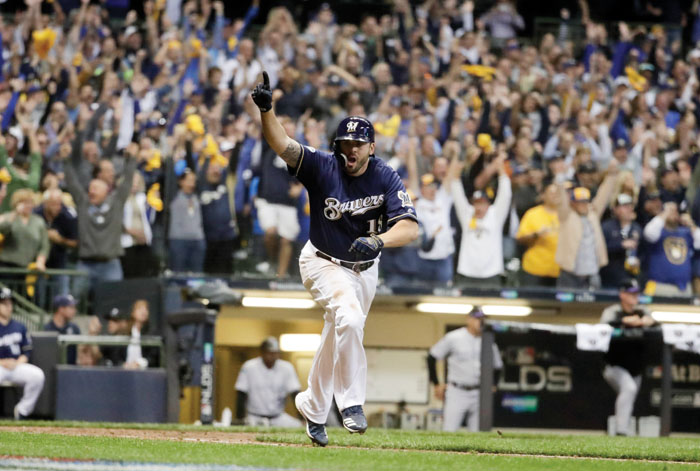 Milwaukee Brewers' Mike Moustakas hits a walk off RBI single during the 10th inning of Game 1 of the National League Divisional Series baseball game against the Colorado Rockies Thursday, Oct. 4, 2018, in Milwaukee. The Brewers won 3-2 to take a 1-0 lead in the series. (AP Photo/Morry Gash)

MILWAUKEE (AP) — Extra innings, two outs and the winning run on third in Game 1 of the playoffs.

Short on playoff experience, the Milwaukee Brewers dealt for veteran Mike Moustakas over the summer to produce in just this kind of spot.

Moustakas scored MVP front-runner Christian Yelich with a two-out single in the 10th inning, and the Brewers bounced back to beat the Colorado Rockies 3-2 Thursday in their NL Division Series opener.

After giving up two runs in the ninth that made it 2-all, the Brewers regrouped and soon celebrated. Making their first postseason appearance since 2011, they won their ninth straight game overall.

Moustakas had already produced for Kansas City in October, hitting .304 in the 2015 World Series to help beat the Mets.

He’s doing it again in Milwaukee after being acquired from the Royals in late July.

“Being in a postseason a couple years back, it definitely helps,” Moustakas said.

Chants of “Mooose!” echoed around Miller Park after the winning hit.

Game 2 is Friday in Milwaukee with Colorado’s Tyler Anderson opposing Jhoulys Chacin, who led Milwaukee with 35 starts this year. He started Monday when the Brewers beat the Chicago Cubs 3-1 in the NL Central tiebreaker at Wrigley Field.

Yelich hit a two-run homer in the third inning, then opened the 10th with a walk against Adam Ottavino, coming back from an 0-2 count.

Yelich made his postseason debut, though the even-keeled star spoke as if he had been through this before.

“You’re just trying to slow the situation down … find a way to get on and make something happen, put some pressure on him,” Yelich said. “And Moose was able to come through there at the end with the huge hit.”

Yelich advanced to second on a wild pitch and came home on Moustakas’ line drive to right field. After almost winning the Triple Crown this year, Yelich got two hits, scored twice and stole a base in his playoff debut.

Josh Hader and the Brewers allowed just one hit over eight innings in a dominant bullpen game and led 2-0 before Jeremy Jeffress gave up three straight singles to open the ninth. Charlie Blackmon grounded an RBI single shortly after his ground-rule double was overruled on replay review, and Nolan Arenado added a bases-loaded sacrifice fly to tie it.

But Colorado couldn’t come through in extras again after outlasting the Chicago Cubs 2-1 in 13 innings in the NL wild-card game on Tuesday.

“Everybody knows I throw a lot of sliders. In that spot, I wanted to elevate. I wanted to get a little higher than I got it,” Ottavino said. “I think I guessed what he was looking for wrong there.”

Joakim Soria picked up the win in the opener with a scoreless 10th.

The two-time All-Star third baseman had 15 RBIs in 31 postseason games while with the Royals.

Make it 16 now in Milwaukee.

“Look, Moose has been in those spots,” manager Craig Counsell said. “It’s something that you try to not make the situation too big, and he did a great job of it and finally got a pitch to it.”

The big-hitting Rockies, meanwhile, are still struggling to find their stroke. After beating the Cubs earlier in the week, this visit to Miller Park meant them playing in a different city for the fourth time in five days.

“Time will tell, but I think the day off helped yesterday,” skipper Bud Black said. “I think the postseason energizes players.”

With more and more teams relying exclusively on relievers in the regular season, the Brewers tried to take the new-wave approach to a new level in October. Out of the six pitchers who took the mound, only Jeffress allowed any runs.

Corbin Burnes, who tossed scoreless innings in the fourth and fifth, was the only other reliever to allow a hit.

Colorado was 1 of 23 with 10 strikeouts over the first eight innings. They were 3 of 6 in the ninth.

Matt Holliday’s pinch-hit single in the ninth was his 15th career postseason with Colorado, tying him with Yorvit Torrealba atop the team’s career playoff hits list. … Yelich became just the fifth Brewers player to reach base at least four times in a postseason game. … OF Ryan Braun went 2 for 5 to record his ninth career multihit game in the postseason.

Anderson (7-9, 4.55 ERA) starts Game 2 in Milwaukee, coming off 7 2/3 shutout innings in a 12-0 win on Sunday over Washington that set up the NL West tiebreaker game the next day against the Dodgers. It was the left-hander’s first victory since July 4. Chacin (15-8, 3.50) turned into the Brewers’ most consistent starting pitcher this season. He will work on three days’ rest after allowing one run and one hit in 5 2/3 innings in that win over the Cubs.

MILWAUKEE (AP) — Nolan Arenado and Colorado had one good stretch at the plate. That was it for the whole afternoon.

Tough couple of days for the Rockies’ star-studded lineup.

Arenado helped Colorado rally against Milwaukee’s vaunted bullpen in Game 1 of the NL Division Series, but the Rockies were unable to finish off Jeremy Jeffress. Mike Moustakas then hit an RBI single in the 10th inning to lift the Brewers to a 3-2 win Thursday.

Led by Arenado and Trevor Story, Colorado finished among the major league leaders in several offensive categories this year. But the Rockies have been held in check since they bashed five homers in a 12-0 victory over Washington last Sunday, leaving them in a tie for the NL West lead.

“We’ve got to put better at-bats together, all of us,” Arenado said. “I think we’re having a little trouble there the last few games. But at the same time, we’re facing good pitching. It’s tough. These guys are good.”

Colorado had just one hit Thursday before Gerardo Parra and Matt Holliday opened the ninth with consecutive singles off Jeffress, who had made 11 consecutive scoreless appearances since Aug. 31. Charlie Blackmon singled in Parra and DJ LeMahieu reached on an error before Arenado tied it at 2 with a sacrifice fly to center.

The Rockies had a chance for more, but Blackmon was tagged out in a rundown on David Dahl’s grounder to first and Jeffress struck out Story to end the inning.

“I thought we did a good job at the end, stringing together some hits, put a couple runs up when it didn’t look good,” Blackmon said. “We didn’t really do a whole lot offensively until that ninth inning.”

That missed opportunity proved costly when Moustakas came up with the game-ending hit against Adam Ottavino.

Game 2 of the best-of-five series is back at Miller Park on Friday.

“We just got to be ready to go tomorrow,” Arenado said. “It’s a borderline must-win really.”

Colorado had a chance to win the NL West before it lost 5-2 in the tiebreaker at Los Angeles on Monday. It had just two hits before Arenado and Story hit back-to-back homers in the ninth inning.

Arenado hit a sacrifice fly in the first in the wild-card game Tuesday night in Chicago, and Colorado didn’t score again until Tony Wolters’ 13th-inning RBI single in a 2-1 victory over the Cubs. The Rockies finished with 11 hits, but went 1 for 10 with runners in scoring position and left 11 runners on base.

Playing in their fourth city in five days — covering approximately 2,700 miles — it was more of the same in the NLDS.

Perhaps that shouldn’t be such a surprise. Playing away from hitter-friendly Coors Field, the Rockies ranked 20th in runs (335) and 29th in batting average (.225) on the road.

Carlos Gonzalez tripled with two out in the fifth for Colorado’s first hit. But Ian Desmond tapped back to the mound on Corbin Burnes’ next pitch, ending the inning.

LeMahieu and Ryan McMahon each walked, and then were thrown out trying to steal second.

“I think it was more about how they threw the ball than our at-bats,” manager Bud Black said. “I mean, they pitched really, really well.”

Arenado hit .297 with an NL-best 38 homers this year, helping stop the Triple Crown bid by Brewers star Christian Yelich. But the 27-year-old Arenado went 0 for 3 with two strikeouts in just the third playoff game of his stellar career.

Story, who set career highs with 37 homers and 108 RBIs this season, also struck out three times, and Dahl went 0 for 4 with two Ks.

None of the Rockies’ hitters saw a pitcher more than once.

“They have a good bullpen. We knew that coming in,” Arenado said. “But we feel like we had some good at-bats. Hit the ball hard, just right at people sometimes.”