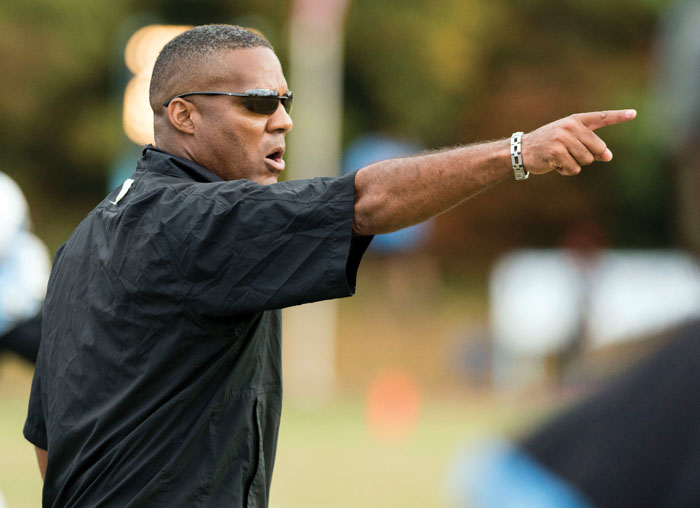 It’s homecoming at Livingstone and the contest against the Falcons kicks off at 1:30 p.m., in Alumni Memorial Stadium. The CIAA game is the first Southern Division action for both teams.

The Blue Bears are 2-2 overall, having defeated Allen (19-0) and Lincoln (30-0). In addition to last week’s loss, Livingstone fell at Pikeville (52-23), in the season opener. A game on Sept. 15 at Lane was cancelled by Hurricane Florence concerns.

St. Augustine’s is 1-3 but the Falcons have played a tough schedule thus far. Coach Tim Chavous’ team opened the season with back-to-back Division I opponents, losing to Jacksonville (63-14) and N.C. Central (51-14). The Falcons also had a storm-related cancellation (Virginia State) on Sept. 15 and then played CIAA foe Bowie State tough, falling 32-22.

The Falcons got their only win last week, defeating Elizabeth City State on the road, 24-17.

“St. Aug’s is always a tough game,” said Livingstone head coach Daryl Williams. “It seems to always come down to the very end and we’re looking forward to a good, hard-nosed game with them again this time.

“We’re excited about being at home and playing our first divisional game this week,” continued Williams. “We’re getting ready.”

Williams, in his sixth season at Livingstone, is probably the more excited than most. Due to an athletic administrative decision, Williams held office hours and practices, but missed the first four game days. He’ll be back on the sideline on Saturday and was so excited about that fact, Williams suffered a slight injury while running around at practice on Monday.

“Absolutely, I’m happy that situation is behind us,” said Williams. “Our coaches have done a great job of holding it down and I’ll be back full go. I kind of tweaked my ankle, running around with the guys on Monday, but I’ll be fine on Saturday.

“I was trying to show Miles (quarterback Miles Hayes) something, but I may be getting too old for that,” laughed Williams.

Speaking of Hayes, the true freshman continues to play well. He has completed 65 of 123 passes for 793 yards and seven touchdowns in his four starts. Hayes also has 88 yards on the ground, with another TD.

“He’s doing what we ask,” Williams said of Hayes. “He’s managing the game and he is consistently getting better. He’s getting better each and every week, and he’s still just an 18-year-old freshman.”

Williams added that the offense needs to improve on its third-down conversion rate, an issue the Blue Bears are struggling with this season.

Hayes’ favorite target, by far, has been senior wide out Everett Ransom — 21 catches for 278 yards and two scores. DeAndre Vickers is next with 11 receptions.

Senior defensive back Gregory Hines had another interception at Virginia Union, his third of the season. Senior lineman Armond Cox had 15 tackles, including four for losses. Linebacker Raheem Coxfield leads the team with 19 tackles and two forced fumbles.

Williams said that he made a change this week, “practicing on Monday and giving them off on Thursday. We went full pads on Tuesday and concentrated on special teams on Wednesday. We’ve had some breakdowns on punts and kickoffs, so we needed to clean that up.

“But overall, I’m pleased with where we are at this point,” continued Williams. “Coach (defensive coordinator Rodney) Hughey did a great job in my absence and we’re trending in the right direction.”

NOTES: Livingstone has lost two straight one-point heartbreakers in this series, falling 30-29 last season in Raleigh and at home in 2016, 38-37. The Blue Bears last defeated St. Augustine’s in 2015, winning in Raleigh, 31-7. … Justin Ruffin, a running back from Salisbury, leads the team with 167 yards on 38 carries, an average of 4.4 yards per rush.

Dodgers get jump on the Braves in NLDS