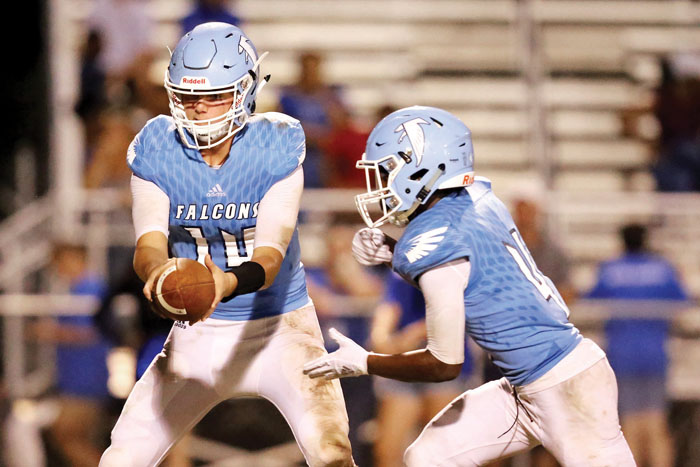 Any way you look at it, West Rowan is tough in county games.

That’s a big part of who the Falcons are right now. They may be 3-3, they may look so-so against Cox Mill or A.L. Brown, but put them up against a Rowan team, and they play bigger and stronger and more confident. It’s just a fact of life.

The Falcons are 69-5 against Rowan opponents in the last 20 football seasons, so it’s hard for even the most optimistic East fans to visualize a victory over the Falcons tonight, as both teams finally sink their teeth into 3A North Piedmont Conference play.

Yes, there was a time when just about everyone beat up on the Falcons.

It’s no secret when things turned in West’s direction. That was in 1999, the late Scott Young’s second year as head coach. West swept the county in 1999 and hasn’t looked back.

To find a season in which West lost more than once in the county,  go back to 1998, Young’s first year. That was a 3-8 West team that was 1-3 in county tussles. It beat Salisbury but lost to South, North and East.

West won its last three county games in 2001 to embark on a legendary 44-game county winning streak that lasted well into the 2012 season. In West’s seventh game of that 2012 season, the Mustangs stunned the Falcons, 13-7, in Granite Quarry. East came into that memorable game, 3-3, while West entered it, 5-1.

West lost to Hibriten in the playoffs to close a strong 2016 season, went 6-6 in 2017, and stands 3-3 this season. So the Falcons are 9-10 in their last 19 outings. They aren’t as fast as they once were and they haven’t looked this beatable, this vulnerable in a long time.

But before you pick against West, think about this. North Rowan is 4-1 and looks really good right now, but that one loss was to West Rowan. In the county games, the Falcons cut down the penalties and missed tackles and make more big plays. That’s just how it is.

West’s current mini-streak in county games sits at 12 straight. That’s not 44, but it’s not chopped liver. West hasn’t lost in the county since it got blown out at home in 2014  — by East. Coach Joe Nixon has yet to lose a county game since he became West’s head coach.

The picks were 3-1 last week — the miss was that tight Oak Grove-South Rowan game. For the season, the picks are 27-8.

This is not a scary West team. MaxPreps says there are 109 better teams in North Carolina. West has been outscored, 164-129.

East has a half-dozen of the county’s best players in Christian Bennett, Max Wall, Gabe Hinceman, Elton Hooper, Hunter Eagle and Sammy Pinckney, so an upset is possible.

Still, I don’t think you can logically pick West to lose in a county game. Someone’s going to start 1-0 in a wide-open NPC, and it’s probably the Falcons.

Rarely have I been so certain that a 2-4 team is going to beat a 3-3 team, but the 2-4 team (Carson) is at home. I like Carson’s chances to start NPC play with a win. The non-league schedule has been brutal — A.L. Brown, North Rowan, Davie County, Central Cabarrus — but the Cougars survived it.

Carson owns a good win over a 4-2 Salisbury team, and the Cougars should score a lot of points tonight. Of course, they’ve also been giving up a  lot, so it probably won’t be easy.

Albemarle won five state championships in a 10-year stretch not so long ago, but the last title was in 2010.

The Bulldogs’ wins this season have come against two of the lesser YVC programs — Chatham Central and North Moore. There was a 50-0 loss to still unbeaten Eastern Randolph and close losses to Thomasville and West Stanly.

North’s defense hasn’t allowed a point since Aug. 24. This is Oct. 6. There was an open week in there and a Hurricane Florence postponement, but there were also three straight shutouts.

North back Malcolm Wilson (10 TDs) has been the county’s most consistent offensive player to this point. Albemarle still has athletes, but it will be tough for the Bulldogs to stop him.

North QB Willis Mitchell hasn’t thrown a pick since opening night and has been doing a fine job of managing games. North can changed speeds. It has the ability to pick up the tempo with its passing game or slow things down and let Wilson pound it. This is a good 1A team.

There are quite a few games in which both of these teams are overmatched. There are also a handful of games they expect to win.

This is a Central Carolina Conference game that both expect to win, that both have marked on the calendars, so it’s going to be interesting.

West Davidson (1-5, 0-4 CCC) logged its lone win back in August against 1A South Davidson.

South (1-5, 1-3 CCC) edged East Davidson at home for a CCC victory. West Davidson dropped a close one to East Davidson. Both teams were blown out by CCC bullies Ledford and North Davidson.

West Davidson also has lost by 30 to Salisbury. That was the “Cameron Gill Game,” in which the Salisbury DB had three returns for TDs.

But what that Salisbury game showed is that West Davidson has surprisingly good linemen. The Green Dragons actually outplayed Salisbury in the trenches. So it’s probably going to be tough for South to run the ball against West Davidson or to stop West Davidson from running it.

Still, South is at home and has big-play capabilities, thanks to QB Drew Huffman. Two big plays might win this one.

Statistically, the teams are almost identical, with both scoring a bit under 10 points per game and both allowing five TDs per game.

South won the first meeting of the schools last season, 32-20.

It’s hard to over-hype this one.

It’s one of the bigger home games in Central history. It’s also the South Piedmont Conference opener for both teams.

Central (6-0) is the complete package. The Vikings, who battered East Rowan and Carson, among others, can run it or throw it, and they can stop people in the red zone.

The Wonders (4-2) have a terrific, dual-threat QB in Jordan Medley and lots of speed on both sides of the ball.

Central hasn’t played anyone as good as A.L. Brown to this point. The Wonders also that tradition and they have overwhelming history — 25-0 against Central — on their side.

Both teams are 3-3. R.J. Reynolds hosts the Central Piedmont Conference opener for both teams.

I am frequently wrong trying to figure out the War Eagles, but they’ve got too much offense for RJR.