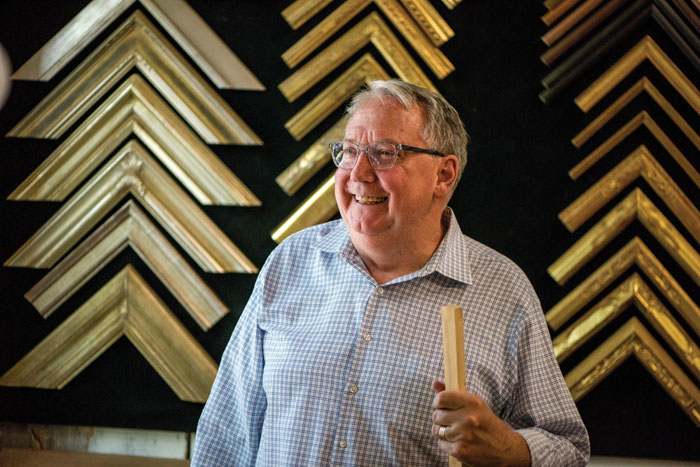 SALISBURY — Bruce and Jackie Wilson found their passion for custom framing 40 years ago. On Saturday, they will celebrate a milestone at Fine Frame Gallery.

The couple opened Art Aspects in Charlotte and, in 1987, added a second store in downtown Salisbury.

“In 1978, I decided to jump in myself, and customers kept me busy ever sense — customers all over the United States, because they moved away,” Wilson said. “They’re comfortable with what we know, and they send us stuff.”

Over the years, the Wilsons have evolved their space at 105 S. Main St., which was previously half of Victory Theatre. And Bruce said he has enjoyed every second of it.

“When I first started, you’d call me and I’d say, ‘This is Bruce Wilson.’ ‘I need you to come help me with some frames,’ and I would come to your house and I would have a little suitcase and open it up (and) have mat samples,” Bruce said.

When Bruce learned about framing, he was instantly hooked.

“It’s one of those hidden things that you wouldn’t know that you could make a living at, but it’s so satisfying,” Bruce said. “People will bring us their treasure and then we’ll build a little house for it. We’re able to preserve art as well as protect it.”

The shop has framed a signed jersey given to a boy for Make-a-Wish, mementoes from a couple’s relationship and artists’ photos.

“I can’t think of anything else that’s been so satisfying,” he said. “It’s fun.”

As they celebrate 40 years, the Wilsons are looking ahead to take advantage of opportunities that come their way, like having workshops hosted by artists.

“I did not start off with a grand design of a framing business,” Bruce said. “It all kind of happened, and opportunities came up. And a phrase that I love to share is, ‘Luck is where preparation meets opportunity.'”

Also featured will be a magic show by Glen Yost and music by Dirty Cosmic.