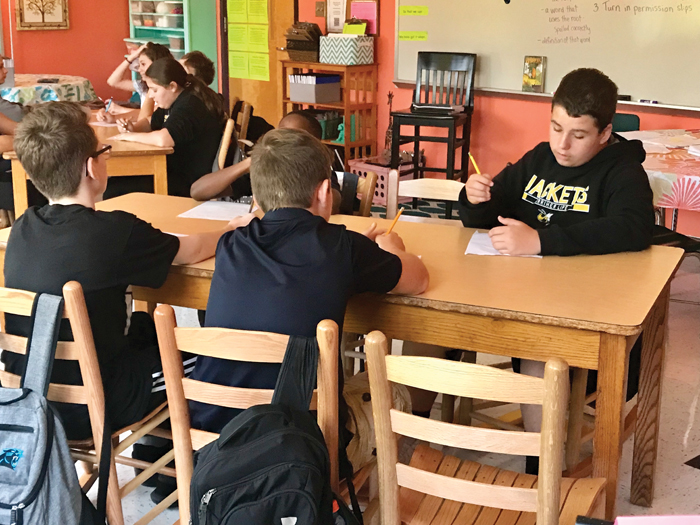 Students in one of Stacey Carver's classes work quietly in their rocking chairs. Submitted photo

LANDIS — Students at Corriher-Lipe Middle School are rocking their way through the school year.

Stacey Carver, a seventh-grade English language arts teacher, put out a call last month for donations of rocking chairs for her classroom. The response, she said, was overwhelming.

“It’s a tremendous accomplishment,” she said.

Carver started replacing traditional classroom seating with rocking chairs during the 2017-18 school year. The chairs, she said, can help students who struggle with attention deficit disorder or behavioral issues to focus on lessons.

Some students are compelled to move and fidget, and in a traditional classroom, that spells trouble. But if the students can rock, they can concentrate.

The rocking chairs Carver procured are designed for middle school students and lack traditional arms — so they can be pulled right up to a desk. According to Carver, her students love them. When she had only a few of the chairs, they were coveted seats.

“Now that they have a rocking chair, no one wants to sit anywhere else,” she said.

Carver still keeps a few traditional seats in her classroom. While most of her students thrive in rocking chairs, they’re not for everyone. So far, though, the non-rockers have remained empty.

And the classroom is surprisingly quiet. Carver said she used to hear the traditional seats constantly as they creaked or scraped across the floor.

“But these, there’s none of that,” she said.

The chairs can be stacked on top of desks during cleaning.

When Carver told her students at the beginning of the year that she hoped to replace every seat with a rocking chair, they didn’t believe her.

“A lot of them didn’t have faith in what I was telling them. To see that follow-through, I think, was the most astounding part of it,” she said.

Chairs were donated by Dignity Memorial, First Baptist Church of Salisbury, Advanced Spinal Fitness in Mooresville and the parents of two of Carver’s students.

“I am extremely grateful to the community for them coming forward and for making this happen for the students,” Carver said.