‘Roval’ a smashing success for all except Jimmie Johnson 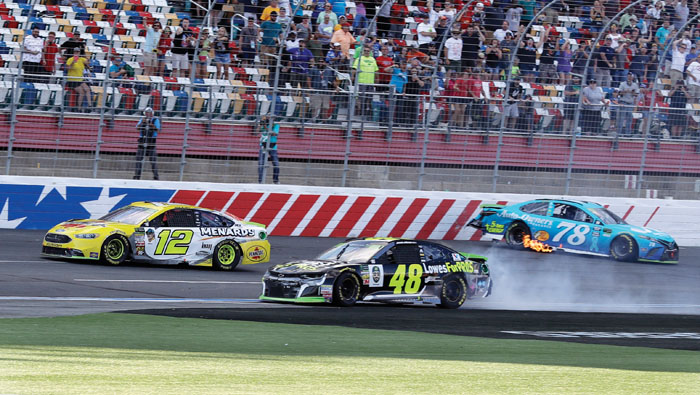 CONCORD (AP) — Wherever NASCAR is headed these next few years, Marcus Smith proved he deserves a seat at the head negotiating table.

The head of Speedway Motorsports Inc. has been pushing for innovative changes in the sport, and he actually put his money where his ideas are by renovating Charlotte Motor Speedway into a combination oval and road course that made for one of the most exciting races of the season. There were so many unknowns surrounding Smith’s “roval” that fans were genuinely excited for Sunday’s playoff race (it helped that the word “roval” was a draw all its own,  prompting casual fans to give a curious look at NASCAR for the first time in forever).

When the smoke from the post-race fireworks finally cleared Sunday, and Ryan Blaney had washed down his playoff victory with a champagne toast led by Smith and Charlotte’s loyal fans, NASCAR was able to sit back and celebrate a successful weekend.

It’s been a while since everything went this well — with Jimmie Johnson a prominent exception.

There won’t be a record eighth championship, at least not this year, because the most accomplished driver of his generation refused to play follow the leader across the finish line.  Winless and losing the only sponsor he’s ever had in NASCAR, Johnson and his Hendrick Motorsports team have not appeared to be a contender this season. Had Johnson advanced to the second round of the playoffs it would have been a welcome victory, small as it may be since he entered the race a candidate for elimination.

Instead, Johnson found himself running inside the top 10 for a large chunk of the race, and after a late crash knocked out some of the most dominant cars, Johnson was second to Martin Truex Jr. over the final three laps.

Had Johnson stayed in line, he would have moved on to the playoffs. But he hasn’t won in over a year and the race was at Charlotte, where Johnson won eight points races on the oval and was once unbeatable. He made his move on the final lap and it was a spectacular disaster. First Johnson wheel-hopped as he tried to pass Truex, then his car slid through grass and shot back out, clipping Truex and Blaney slipped by both for the victory.

It’s hard to criticize Johnson for going for a drought-ending win. Where he truly messed up was in missing the final corner on the roval. Under the rules, Johnson was forced to stop his car and self-penalize himself for the whiff. When he drove off, he’d fallen from second to eighth, lost his cushion in the standings and ended up in a three-way tie for the final transfer spot in the playoffs — and he lost on a tie-breaker.

Had Johnson not stopped after the spin and let all those cars past him, he wouldn’t have finished eighth. He also would have forced NASCAR to decide whether to penalize him post-race for missing the turn.

That wasn’t one of the second guesses Johnson had on Monday. He said on social media he would have only changed front brake bias as he headed into the braking zone because he believes that would have put him in a door-to-door race with Truex across the finish line.

He will never know. And his losing streak continues as he heads this weekend to Dover International Raceway, site of his last victory nearly 17 months ago.

On the flip side, the first round of the playoffs could not have gone any better for Team Penske, which got a Brad Keselowski win in the opener, a Blaney win in the closer and all three of its drivers avoided elimination as the field was cut to 12.

That might not have been the case for Blaney had he not kept his car clean when Keselowski missed the entrance to the first turn on a restart with six laps remaining. Keselowski led the front line into the tire barrier and knocked himself out of the race and ruined Kyle Larson’s chances at the win.

Blaney was in that mess, but backed out of it unscathed.

His shot at advancing into the next round was intact, so he was content where he was in the running order on the final lap. Then came the gift from Johnson and he pounced, with mixed feelings after.

“I don’t want people to look at it as, ‘Oh, you just won because the two guys wrecked,’” Blaney said. “That’s what it was, and you don’t want to be kind of overjoyed about it. You have to have some pride in it, I guess, it’s a weird feeling. I hate using that ‘undeserved’ word because we deserved it because we put ourselves in that spot. But it’s just a different. I’ve never won a race like that before.”

It had to be equally weird for Blaney, the son of sprint car star Dave Blaney and a native of nearby High Point, woke up Monday and found his local paper celebrating the win by none other than “Dave Blaney.”  Ryan Blaney wasn’t complaining; his dad was at the track for the first time in nearly two months and the entire family celebrated Ryan Blaney’s first victory of the season.

Racing has become stagnant on 1.5-mile ovals and the lack of on-track action has made selling tickets a challenge for race promoters.

Smith and his SMI group spent almost three years pushing for the roval race, which came the same season NASCAR used an experimental rules package in the All-Star race at Charlotte that Smith favored if for no other reason than it was something different.

Fans loved the All-Star rules (drivers did not) but Smith has focused mostly on what his customers are clamoring for. The roval provided something fresh and new, and Smith isn’t done pushing for more innovation.

He said after the checkered flag that he felt as if he himself had just won the race.

“I wanted there to be an opportunity to pass for the lead, for the win on that last lap,” Smith said. “What happened is not what I had imagined or necessarily hoped for. I think it was incredibly exciting. The roar from the fans was all I needed to know that that was the moment that everybody will remember for a long time.”

If Smith’s ideas can create more moments like Sunday’s finish, then everyone should be listening to him.