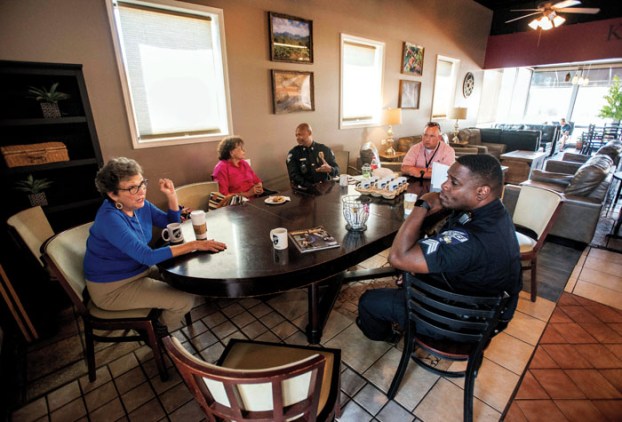 Residents meet officers for coffee during Coffee With a Cop

SALISBURY — Linda Sufficool and her friend Liesa Montag-Siegel usually meet for coffee at Koco Java about five times a week. But on Wednesday, the two women sat down to talk with Salisbury police officers as part of the Coffee With a Cop initiative.

“This is part of our community-engagement initiative,” said Deputy Police Chief Shon Barnes.

The program, similar to a national one, was created to bring police officers and residents of the community together over coffee to discuss issues and learn more about each other.

“People get to know us on a human level that doesn’t seem threatening. They see us as community members and not simply as officers,” Barnes said.

Officers on a rotating basis took their breaks to meet people who were having coffee at the shop.

Sufficool and Montag-Siegel were two of those people.

“I know they’ve done it in other places. I love the fact that they are getting out to meet people. We usually come to them,” Sufficool said.

She said it was awesome to be able to sit down with the officers.

“It’s so often we forget to thank people in the community for what they do,” Sufficool said.

“It’s a tough time to be an officer,” she said.

Barnes said the Police Department hopes the program will be a catalyst to relaunch a previous Coffee With a Cop.