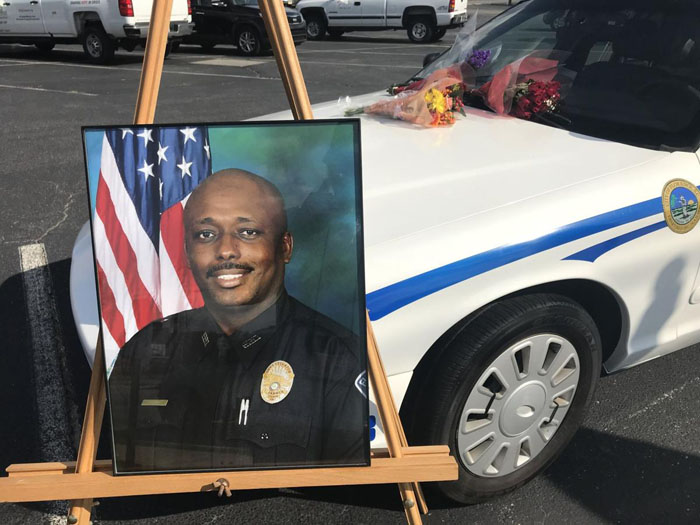 The police officer killed in a standoff in Florence, South Carolina, on Wednesday attended Livingstone College in the mid-1980s, the college said Thursday.

Terrence Carraway was killed and six other officers were injured in a confrontation with a man who held children hostage as he fired on the officers, the Associated Press reported.

Livingstone College said records show that Carraway was a student there from fall 1984 to spring 1985.

Carraway, 52, was a 30-year veteran of the Florence Police Department.

Carraway was minutes away when he got the call to help his fellow officers. He was described by Florence Police Chief Allen Heidler as the “epitome of a community police officer.”

Carraway’s Facebook page lists Livingstone as the school where he studied, according to the college.

“It was clear that he was proud to have attended Livingstone College,” Jenkins said. “We’ve already heard from alumni who knew him while he matriculated here. This is our homecoming weekend, and we intend to pause throughout our events to reflect and honor the braveness of this veteran law enforcement officer, this fallen Blue Bear.”

Carraway, 52, of Darlington, was just shy of 31 years of service with the Florence Police Department, the Associated Press reported Thursday. Heidler described him as  a guy who “laughed all the time.”

Carraway “was a giant of a man, but he was the proverbial gentle giant, and I loved him,” the police chief said.

The Vietnam veteran and disbarred lawyer accused in the shooting bragged online about his marksmanship and love for the “smell of gunpowder” in the years before the standoff, according to records and social media posts unearthed Thursday.

Frederick Hopkins lost his law license in the 1980s for mishandling money and faced several minor criminal charges in recent years, including disorderly conduct in 2014.

It was about the time of his disbarment that he got serious about amateur target-shooting, according to the records and posts.

More details emerged about the two-hour standoff in which authorities say Hopkins’ gunfire prevented officers from rescuing comrades who lay bleeding on the ground.

Heidler said he did not know the conditions of three wounded sheriff’s deputies.

Hopkins is accused of opening fire Wednesday from his home in an affluent South Carolina neighborhood after deputies tried to serve a search warrant. He also allegedly held children hostage inside, authorities said.

It was not clear exactly how the confrontation ended. Authorities would say only that the gunman released the children as he was taken into custody.

The warrant involved an accusation that a 27-year-old person at the home sexually assaulted a foster child who lives there, Florence County Chief Deputy Glenn Kirby said.

In 2016, the 74-year-old Hopkins posted photos on Facebook of guns set up for target practice, bragging that he was the state’s 2011 “3-Gun Silhouette Champion.”

In a 2014 post, he said he celebrated his 70th birthday at a range by repeatedly firing his M14 rifle, which he “set up exactly like the one I used in Vietnam.”

“I have been shooting competitively since 1984 and lovin’ it. I just love the smell of gunpowder in the mornin’s,” the post said.

His competitive shooting would have begun about the time he lost his law license over $18,000 in wrongfully collected attorney fees. A court order shows that the state Supreme Court in 1984 allowed Hopkins to pay back the debt over time and surrender his license rather than complete a six-month jail term.

Court documents also show that he was injured in Vietnam and received disability payments. The filing does not elaborate on the injury.

During the standoff, the sheriff’s armored personnel carrier was brought in to recover the wounded.

“Fire was being shot all over. The way this suspect was positioned, his view of fire was several hundred yards. So he had an advantage,” Florence County Sheriff Kenney Boone told reporters.

Chief Heidler estimated Thursday that it took a half hour to reach some of the wounded officers.

Authorities did not identify any of the wounded officers.

The violence stunned the area, where many people have been dealing with the aftermath of Hurricane Florence. Florence, a city of 37,000 in South Carolina’s northeastern corner, sits at the convergence of Interstates 95 and 20 northwest of the state’s well-known “Grand Strand” of beaches.

Byron Black, who lives near the subdivision where the shooting happened, said he knew both the slain officer and the children of the suspect and described the Hopkins family as “good people.”

“You never know how stuff will happen,” he said.

He said Carraway, his youth football coach in the late 1990s, was a down-to-earth community leader with whom young people felt comfortable discussing their problems.

“If you got in trouble, he would try his best to get you out of it or tell you the steps you need to take to get out of it,” he said, later adding: “He was one of the good cops.”

Residents meet officers for coffee during Coffee With a…