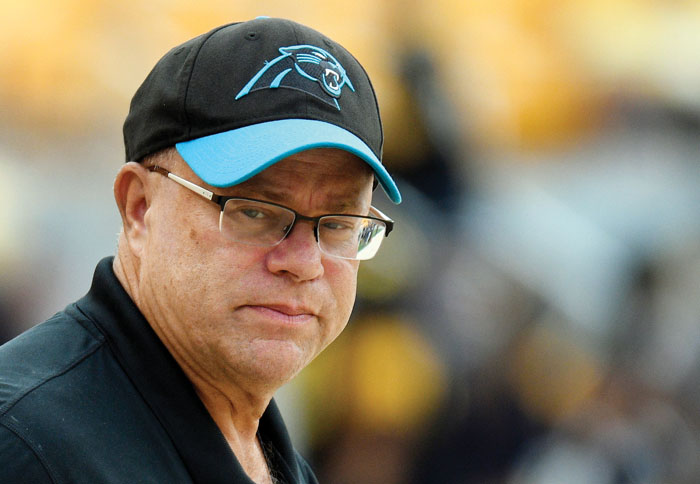 FILE - In this Aug. 30, 2018, file photo, Carolina Panthers owner David Tepper walks in the field during before an NFL football game against the Pittsburgh Steelers in Pittsburgh. The times are changing in Carolina. New owner David Tepper capped a big couple of weeks by signing Eric Reid, a move one former player says never would have happened under previous ownership. (AP Photo/Don Wright, File)

CHARLOTTE (AP) — When new Panthers owner David Tepper signed former Pro Bowl safety and social activist Eric Reid it was another clear sign to players that times are changing in Carolina under his leadership.

Tepper is showing the players in his locker room that he’s eager to listen — and get involved — when it comes to social and racial injustice.

Tepper supported the players’ protests and this week he accompanied Carolina players Torrey Smith and J.J. Jansen on a “listen and learn” tour in Charlotte with law enforcement, public defenders and social justice advocates. The group discussed solutions to what the Players Coalition said are “systemic issues that lead to racially and ethnically disparate over-incarceration” in North Carolina.

The agenda topics included bail reform, racial disparity regarding policing, segregation and the lack of educational resources for youth in low-income communities of color.

“He’s a person that really cares about the community,” said Smith, a Panthers wide receiver and member of the Players Coalition. “It’s not just about the flawed criminal justice system, it is about need in general. And he’s all over it. He’s very well educated in that field, and he cares a lot. I believe he is the perfect owner for this city and the challenges it has.”

Smith’s comments seem to represent a 180-degree change in how the players view ownership — and it’s only been three months since the 61-year-old hedge fund founder purchased the team.

The Panthers previous owner and team founder Jerry Richardson erred on a more conservative side.

Players also no longer seem to have a fear of retaliation if they express themselves.

In September of 2017, while Colin Kaepernick, Reid and others around the league were protesting racial and social injustices, players on the Carolina sideline all stood. The closest thing there was to a protest was by Julius Peppers, who remained in the tunnel for one game while the national anthem played.

Some players say they were concerned about being punished — or cut — by Richardson if they protested.

Panthers safety Eric Ball had once raised his hand and one finger after a black man was shot in Charlotte by police officers in 2016. He was cut from the roster a few days later.

The frustration among the players prompted a meeting between Richardson and the team’s captains about their stances on protesting racial and social injustice. While quarterback Cam Newton later said at the time the meeting “productive,” no players protested on the sideline the following week.

That could change Sunday when the Panthers host the New York Giants.

Reid hasn’t decided if he’ll kneel or not, saying that he’s “still evaluating the scope of our country” and that he would make that decision later.

Based on his previous actions, Tepper — who was not made available for comment through requests made to the Panthers — likely would have no problem if Reid takes a knee.

Tepper recently defended NFL players in an interview with CNBC in September, saying the protests are about “justice for all.” He also it makes him aggravated when people call players unpatriotic for protesting, saying “it’s just wrong, it’s dead wrong.”

Newton said Wednesday that Tepper has been “everything that we could have asked for and more” as an owner.

Jansen, the team’s long snapper, likes what he’s seen too.

“It’s very empowering for the players that the issues that we are interested in, he’s interested in them, too,” said Jansen, the team’s long snapper. “That’s not to say that he will agree with every player on every issue, but the fact that he finds them to be important issues to learn about is important.”

Smith believes this is just the beginning.

“This city will be better because of Tepper being the owner,” Smith said.