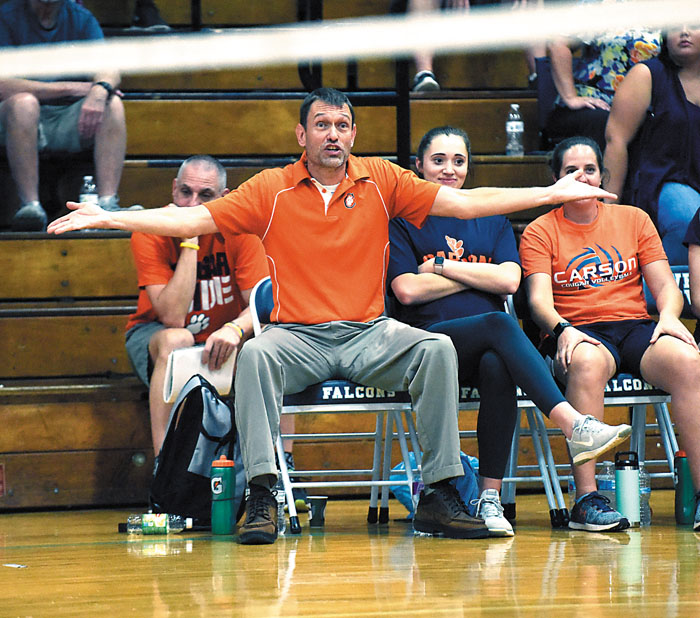 Just another day at the office for North Piedmont Conference volleyball. Second-place Carson had to fight like crazy, but the Cougars won 25-23, 25-21 and 25-20 against the visiting Greyhounds.

Statesville, which has a 6-foot-2 D-I recruit in Madison Dagenhart,  looked like it might chase the Cougars out of the gym in the opening minutes. But Jaden Vaughn, Mallory Weast, Kary Hales, Grace Thomas and their teammates have been down before and they did what they had to do to stay one game behind West Rowan in the NPC race.

“The NPC, top to bottom, I’d stack it up against any league in this state,” Statesville coach Denise Hayes said. “Player for player and match for match, there’s nothing like it.”

Carson coach Kelan Roger never looked relaxed, but this was one of the days when he didn’t have to burn timeouts. Carson(15-3, 6-2)  was on, with Hales doing amazing stuff on the back row, with Thomas’ sets for Vaughn, Weast and Nancy Gamewell  almost always on target. Thomas had 37 assists.

“We knew it would be tough because Statesville has played everyone tough, including us,” Rogers said. “We play in a crazy conference. Statesville is in fifth place, but they’d win some leagues. The top five in our league have played so many five-set matches. You almost expect five.”

Vaughn, a 5-foot-9 sophomore who is the tallest Cougar regular, had a terrific outing with 21 kills and 15 digs. Even on a team with senior Mallory Weast, who has more than 1,000 career kills, Vaughn is emerging as a go-to option. Her teammates jumped on her back in the latter stages of that critical first set. She got it done.

“Jaden has become a great player,” Weast said. “I’ve never seen anyone improve as much as she has in a year’s time.”

When Statesville’s Bri Weidenmann served three aces in a flurry, Carson was down in the second set, 8-3, but a combo block by the explosive 5-6 Weast and the 5-8 Gamewell changed momentum. After a couple of  well-placed serves by Hales, the match was even.  Thomas set up Vaughn for the kill that put the Cougars ahead 12-11, and Carson never lost the lead. Vaughn finished the set in style, with a powerful kill. Some of the dog-pound barking from energetic Statesville fans, quieted.

“We had them in that first set and  we just let it evaporate,” Hayes said. “And then we never could get another run going. Carson is so steady and consistent. They don’t make many errors. They don’t miss many serves. And they’ve got that senior setter (Thomas) to run their offense.”

The third set was more of the same. It was 12-all after a thunderous block by Dagenhart, who is headed to Jacksonville University. Back-to-back kills by Vaughn and Katie Blackwell put the Cougars up two, but Statesville (10-15, 2-6) re-tied it at 18-all and had momentum.

The next point, a long one, was the best of the day. Hales, who had 23 digs, was on the floor three times, keeping the point alive until Vaughn could deliver the tie-breaking kill.

“Our passing from the back, from Kary and all the girls, was about as good as it’s been,” Thomas said. “Great job by them today, and that made the sets easy. And we’ve got a lot of people who can put it down.”

Ella Cloninger slammed an ace for a 20-18 Carson lead, and then Weast took over for the last five points. She defeated a double block for 22-19, hammered one off a Greyhound that headed toward the lobby for 24-20, and then drilled set and match point through two diving  Hounds. That was her 12th kill of the day. She also had 18 digs.

“We finished every set strong,” Rogers said. “That’s what you want to see.”

Next week will tell the tale for Carson as far as the regular season.  A home game with first-place West Rowan on Tuesday (West won in Mount Ulla) and then a trip to South Iredell, where another very stout squad will be celebrating Senior Night.

“We’re playing a lot better than we were a few weeks ago,” Rogers said. “It’s all still in our court.”

NOTES: Gamewell had six kills. … West Rowan stayed on top with a sweep at defending 3A state champ North Iredell on Thursday. … Carson will play the next two Saturdays in tri-matches to prepare for the playoffs. … Statesville also finished fifth in the NPC last year but won playoff matches with Mount Tabor and Southwest Guilford to reach the third round.