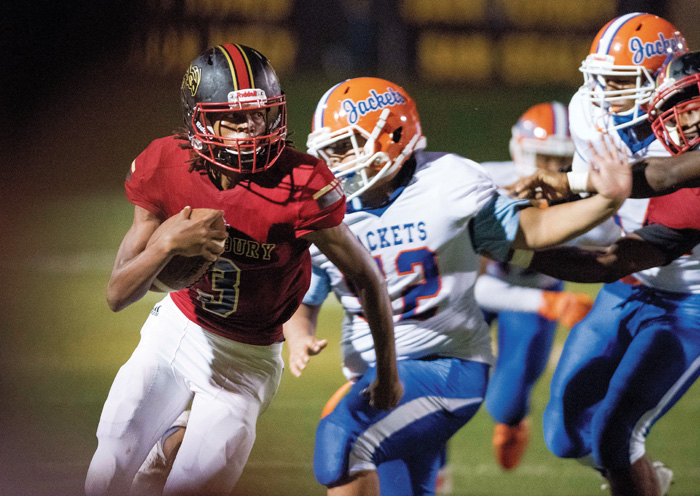 He had his second pick-six of the season in the Hornets’ 41-7 pummeling of Central Davidson. He’s also put the ball in the end zone on punt returns, kickoff returns and fumble returns, and he’s had a few more TDs called back.

“He gets his hands on the ball, and it’s like they just can’t tackle him,” Salisbury defensive coordinator Mike Herndon said. “He looks like a guy who is playing flag football, but without a flag to pull.”

Gill also has more than 100 receiving yards for Salisbury’s offense. He’s having a historic season.

Salisbury’s young defense, with no seniors in the front seven, continues to play tenaciously and shut out Central Davidson for three quarters. Zae Clay (two tackles for loss) and Jabril Norman had strong games at Central. Outside linebacker Jaden Hiligh had his best effort of the season with seven tackles.

Reserve back Jaiwan Poole (5-1, 130) got his first TD on Friday. A tough little guy, he’s a crowd favorite.

Head coach Brian Hinson is excited about a 4-0 jayvee team and is optimistic about the growing strength of the Hornets over the next few years.

Jayvee quarterback Vance Honeycutt might be a future star. He’s progressing quickly as far as reading defenses and the baseball infielder has a strong arm.

Salisbury’s game with Oak Grove that was scheduled for Friday has been postponed until the final week of the regular season.

The unsung hero for a North defense that has posted three consecutive shutouts for the first time since 2013 is 5-foot-8, 130-pound DB Spencer Everhart, the son of assistant coach Kelly Everhart.

“He’s the smallest guy every field we go to, and he’s not the fastest guy, but he’s smart,” North head coach Ben Hampton said. “He had another touchdown-saving pass breakup at South Stanly. His responsibility was the flat on that particular play, but he saw we didn’t have anyone deep, so he got back there and made the play. We’ve got some great athletes in the secondary, but he’s probably been the most impactful guy.”

“Spencer is playing at an all-county level,” he said.

Everhart intercepted a pass at Carson, but the pick was nullified by a roughing the passer penalty. He has a forced fumble and six breakups.

Hampton said the Cavaliers usually carry 45 varsity players, but right now they have 39.

“We’ve got small numbers, and as far as true defensive players, we’ve only got about 14,” Hampton said. “What depth we have on defense comes from our offensive guys, and we’ve got linemen like Benjamin (Rhode Island) Caldwell and RJ Whitby who are doing a heck of a job on both sides of the ball. Caldwell is one of the best offensive linemen — and best defensive linemen — in the county.”

“Our defense got turnovers and our offense made big plays,” Hampton said. “It’s not like we expected, 42-0. South Stanly had been putting up a lot of points.”

Malcolm Wilson got four more rushing touchdowns on Friday and leads the county with 10.

He sat down early with 97 yards, snapping a nice string of 100-yard games, but Hampton said he’s a team player and he understood.

“Up 42-0, that’s a guy we can’t get hurt, and so we got him out of there,” Hampton said. “I gave him a look and he nodded. He realized the situation. I hate he didn’t get the 100 yards  because he had a streak going, but we did what we needed to do.”

It will be homecoming for the Cavaliers on Friday against Albemarle (2-3, 2-0). North hasn’t played in front of the home fans since the lightning-plagued game against Lexington on Aug. 30.

Oak Grove head coach Mark Holcomb was aware that South Rowan QB Drew Huffman had missed the North Davidson game with a concussion, so he didn’t even bother to watch tape of that game. His concern as far as finding a way to beat South Rowan was containing Drew Huffman, a mobile quarterback who can scramble for big rushing yards and also throws accurately on the run.

“That kid is a pretty special player,” Holcomb said after Oak Grove’s exciting 17-14 win against the Raiders.

Andrew Jones isn’t a household name yet, but he’s likely to be one of the county’s top three-sport athletes as a senior.

He’s caught three touchdown passes for the Raiders this season, tied for third in the county.

He’s the center fielder for the baseball team and was second team all-county last spring. He’s also expected to be one of the key athletes for a basketball team that lost a lot of seniors.

Cameron Hurd only had a few touches on Friday, but he had explosive plays on a punt and a reception that gave South (1-5, 1-3 CCC) a chance.

A new season starts for the Falcons on Friday when they take on East Rowan in Mount Ulla to start North Piedmont Conference play.

The NPC appears wide open. Only Statesville (4-2) finished the non-conference part of the season with more wins than losses. Defending champ South Iredell is 2-4.

West hurt itself with second-quarter penalties when it still had a good chance to win on Friday. Then pass-first Cox Mill kept the ball away from the Falcons in the third quarter with a surprisingly stout running game.

The only county players with more career TD passes are Sturdivant (65), Sherrill (66) and Wyrick (74).

Carson, East Rowan, Davie County and A.L. Brown are coming off their open week and all four finally will be starting league play Friday in six-team conferences.

Carson (2-4) appears to have a favorable NPC opener at home against North Iredell (3-3). North Iredell was wrecked, 58-6, by undefeated Northwest Cabarrus last week. Carson still has the county’s leading ground attack and should put up solid rushing numbers.

East (3-3) takes a three-game losing streak into the NPC opener at West Rowan, but the Mustangs have fared the best of anyone in the county against the Falcons in the last decade. They’ve pulled a few surprises.

In the preseason, A.L. Brown coach Mike Newsome talked about the South Piedmont Conference being a league on the upswing, and the first half of this season has solidified that claim. Central Cabarrus (6-0) is still undefeated and will be at home when the Wonders (4-2 ) visit Friday to start conference play. Central, which opened in 1966, is 0-25 lifetime against the Wonders. This should be one of the best games in 3A.

Like the SPC, the Central Piedmont Conference looks like a bear, with no one worse than 3-3 in the non-conference games. Davie (3-3) is the homecoming guest as it starts league play against R.J. Reynolds (3-3).

Davie scores 30 points per game, but allows 38, so excitement is practically guaranteed. Davie is 1-2 on the road, while Reynolds is 3-1 at home.