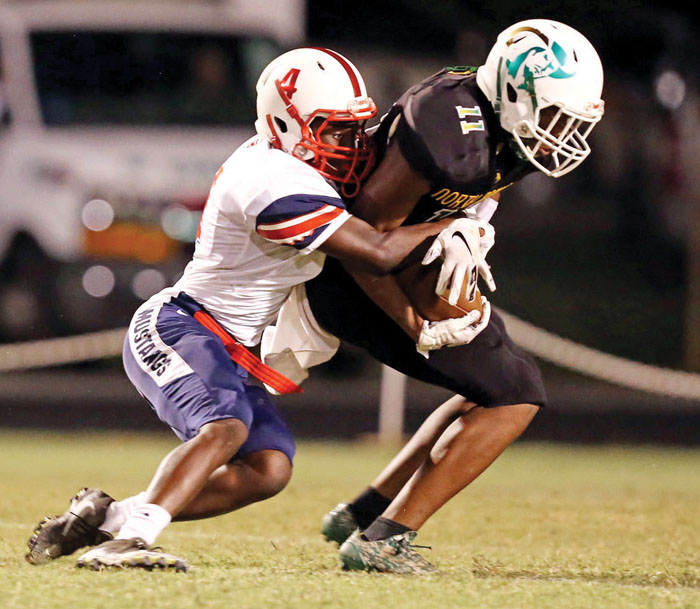 “It was one heck of a coming-out party for him,” North head coach Ben Hampton said.

The breakout performance was a long time in coming for Lyles,  the younger brother of North senior linebacker Tyzai Lyles, who is recognized as one of the county’s top defensive players.

Shymek is a 17-year-old senior, while Tyzai already has turned 18. Tyzai is built like a rock at 205 pounds. Shymek is considerably lighter at 175. Both siblings are listed at 6-foot-1.

“Tyzai was always the one with the muscle,” Shymek said. “But I’ve got some speed.”

Tyzai was impacting North’s varsity team by his sophomore season.

Shymek paid dues with two jayvee seasons. He’d done a ton of work in preparation for his junior year, but that season ended for him before it ever started. He suffered a freak injury on a non-contact day.

“I got hurt in practice,” Shymek said. “I lost my balance on a pass play and tripped. A teammate’s foot struck me right in the collarbone — and fractured it.”

“That injury had to be tough for him because he’d put in a lot of time in the weight room and had transformed his body,” Hampton said. “But even after the injury, he was at every practice, every game, always doing anything that he could to help. While he was injured, he showed us what a great kid he is.”

Shymek said he was just doing what any responsible team member would do – supporting his brother, supporting his teammates. If the team was doing something, he wanted to be part of it, whether he could play or not.

After his clavicle healed, Shymek started making plans for a productive senior year.

“He was always there in the preseason, every workout and every practice,” Hampton said. “He’s one of the kids we took to Coastal Carolina this summer. We wanted our guys to get a look at a D-I program, and we wanted Coastal to have a chance to see what our kids are like.”

In preseason drills, even when the guy across for him was his powerful brother, Shymek didn’t back down.

When this season started, Tyzai was back in his usual role as a defensive sparkplug, while Shymek was still waiting for his chance.

That chance to shine came on Friday. Hampton explained that North’s receiving corps was short-handed due to disciplinary reasons.

Receivers coach Nick Means, the former Catawba star, pulled Shymek aside several days before the game to let him know he’d be making his first start.

“He told me that is was next man up, and I was going to start,” Lyles said. “He told me this was my opportunity and I had to stay focused.”

Lyles said there were no jitters, not anxious moments. He was ready.

“One thing about not being a starter is that I had a chance to learn all four of our receiver positions,” he said. “Right or left, top or bottom, I knew what I was supposed to do and what my teammates were supposed to do.”

North had the ball at its 41, leading 7-0, in the middle of the first quarter. North had three receivers to the left side, with Lyles in the middle. South Stanly was playing an attacking defense determined to stop North Rowan back Malcolm Wilson. South Stanly’s defensive front was a 3-3, plus two spurs near the line of scrimmage.

“One of those rover guys was blitzing every play, trying to disrupt our offense, and I saw him getting ready to blitz again,” Lyles said. “The safety was moving up to replace him, so I just ran to the spot where the safety had come from.”

North QB Willis Mitchell had a nice game with 236 passing yards, and he spotted Shymek behind everyone. Then he delivered the ball. Lyles’ hands and legs did the rest. It was a 59-yard touchdown for a 14-0 lead.

Give Lyles credit. He knows that a touchdown is the result of a lot of people executing assignments. It’s not just throw and catch.

“It was great to score a touchdown, but a lot of things came together there,” Lyles said. “Willis scanned the field and made a good read. An our offensive line gave him the time he needed.”

Less than two minutes later, Mitchell and Lyles connected again. Lyles made a snag down the middle, stepped out of two potential tackles around the 10, and scored a 32-yard touchdown for a 20- 0 lead.

“I credit coaching for that touchdown,” Lyles said. “We’re taught to always pick our feet up on a play like that. I could feel those guys diving at my heels, but I was picking my legs up high, and I kept going.”

Lyles would make one more catch, this one good for 39 yards, but two South Stanly tacklers were able to prevent him from scoring.

Still, it was a heck of night for Lyles in what was essentially his varsity debut. Three explosive plays, plus some nice, physical blocks in the running game to help Wilson.

“Shymek put in his time, and he was ready when he got the call,” Hampton said. “All that work he put in paid off. His breakout night was well-deserved.”

He was a major part of a surprisingly easy win for a North team (4-1)  that shook off the rust from a long layoff and  is gathering steam.