Prize giveaway: Register for a Bob Timberlake print. The drawing will be held at noon Saturday. You do not have to be present to win.

SALISBURY — Each fall when Helen and Ralph Brown have one of their semiannual yard sales, it usually is scheduled close to their granddaughter Anna’s birthday and, in a way, becomes a celebration of her life.

And so it is again this year.

Today is Anna’s 31st birthday, and she is living testimony for the benefits of cystic fibrosis research — something for which her grandparents’ yard sales have raised roughly $240,000 since they started in 2001.

The latest edition of the yard sale will be Friday and Saturday at a new location, First Baptist Church’s Family Ministry Center (the old YMCA), at 223 N. Fulton St. More on that later.

Both Anna and a younger brother, 25-year-old Michael, have cystic fibrosis. Their mother, Stephanie Johnson, says they became a “research-involved family” who benefited from living close to the University of North Carolina at Chapel Hill.

“Our children were always the guinea pigs,” Stephanie said of their participation in many CF research projects at UNC. “Some of the research they participated in when they were younger is now standard protocol for management of the disease.”

Cystic fibrosis is a hereditary disorder affecting the exocrine glands. It causes the production of abnormally thick mucus, leading to the blockage of the pancreatic ducts, intestines, and bronchi and often resulting in respiratory infection.

There is no known cure, and fewer than 20,000 cases are diagnosed each year. 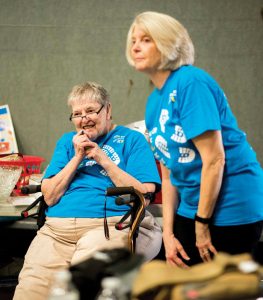 Helen Brown and her daughter Stephanie Johnson help organize the sale that is held in the names of Anna and Michael, Stephanie’s daughter and son. Both have cystic fibrosis. Jon C. Lakey/Salisbury Post

Helen Brown exceeded that goal many years ago through yard sales (and a few other fundraisers) that have become community events — so much so that it finally became necessary for Brown to relocate the sales to the Family Ministry Center.

Brown emphasizes that the city should not be blamed for the move.

“The city has been wonderful to me,” she says. “People think the city’s doing me wrong, but they’re not.”

The Browns faced having to take out $400 in event insurance to keep traffic going one way through their neighborhood on yard sale days. They didn’t want to reduce their yard sale proceeds by that amount.

Helen Brown thinks the new location on North Fulton Street could be a blessing in disguise. Things got pretty crowded in her backyard with all the people and tables, not to mention the parked cars on her neighborhood’s streets.

The former YMCA has a big parking lot. The gymnasium has plenty of room for what yard sale volunteer Brenda Zimmerman says is the largest inventory ever. The Browns don’t have to worry about the weather because everything is inside.

And the tables for the sale always come from the church anyway, so moving them has been much easier.

Helen Brown serves as yard sale mastermind, deciding on many of the prices and where things should go and how they should be displayed.

Ralph Brown works tirelessly behind the scenes moving and storing things and testing items to make sure they operate.

But an army of volunteers also helps, and to borrow an expression, they work for food.

Helen always feeds them at the end of the day. “She actually feeds us pretty much three meals a day,” Zimmerman says.

“We couldn’t do it without volunteers,” Helen says, adding that for the first time someone else will provide an end-of-day meal Friday and Saturday for the people helping out.

The Helen Brown yard sales are above average in that the Browns demand that everything is cleaned, so that many things look new again. They also have a policy that anything electrical or mechanical be in working order.

Stephanie Johnson laughs, thinking about all the loaves her father has made testing out bread machines put up for sale.

Each of the thousands of items in the yard sales also are priced, and dickering about costs really doesn’t happen.

“The prices are so low you’re really not going to want to haggle,” Zimmerman says.

All of the items are donated and of pretty high quality. The Browns usually give items two yard sales — two chances — to be sold. After that, they are given away to organizations such as Habitat for Humanity, a pregnancy center and churches.

Stephanie Johnson works for the state, which allows employees to leave their jobs and give 24 hours of community service a year. Johnson and her husband, Larry, arrived at the Family Ministry Center on Wednesday and were put to work.

Anna and Michael also are expected to be in Salisbury for their grandparents’ sale.

What doctors have learned about CF through the years has helped Anna as a young woman who wanted to have children. Becoming pregnant was “definitely a big risk,” her mother says, and Anna and Michael’s parents also knew that CF leads to much higher chances of infertility.

Johnson says it was amazing Anna became pregnant with her first son, Jonah, and even more amazing she became pregnant again with her second son, Silas. Both boys are under the age of 3 and do not have cystic fibrosis.

“Her health was compromised,” Stephanie says of her daughter’s giving childbirth, but Anna has started a new drug and is rebounding. Her pulmonary function has almost returned to where it was before the pregnancies, she says.

Johnson says the semiannual sales are “special to me because they’re keeping my mother young.”

A second reason they’re important, she adds, is they help cystic fibrosis research that ultimately is helping her two youngest children manage their illnesses.

Helen Brown says she would love for people to support the CF research cause at her new yard sale location.

“I’ve tried to get the word out,” Helen says.