Dodgers look to Ryu, not Kershaw, to set tone in opener 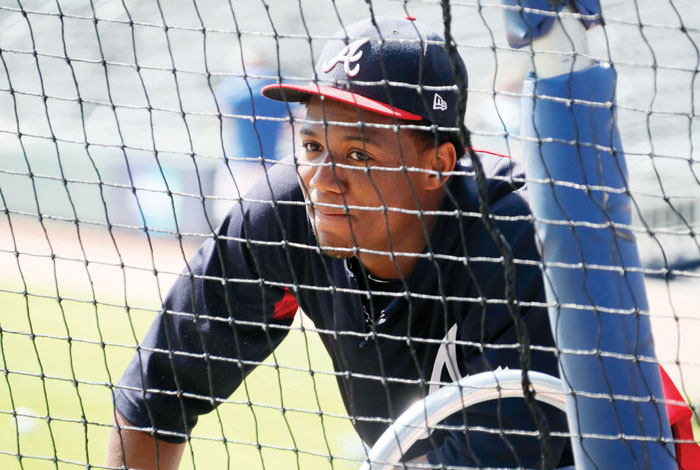 Atlanta Braves' Ronald Acuna Jr. waits for his turn in the batting cage during a baseball workout, Tuesday, Oct. 2, 2018, in Atlanta. The Braves face the Los Angeles Dodgers in the National League division series starting on Thursday, Oct. 4 in Los Angeles. (Bob Andres/Atlanta Journal-Constitution via AP)

LOS ANGELES (AP) — These aren’t the same Dodgers that won 104 games, ran away in the NL West, and fell one victory short of a World Series title last year.

Example A: After a slow start, they won 92 games and needed Game 163 to earn their sixth straight division title.

Example B: Clayton Kershaw won’t be opening the postseason as the Game 1 starter for the first time in six consecutive playoff appearances.

Example C: Kershaw told Hyun-Jin Ryu that the South Korean left-hander was going to take the mound on Thursday night against Mike Foltynewicz and the Atlanta Braves to begin the best-of-five Division Series.

“I’m obviously kind of nervous, but I think it’s a good thing,” Ryu said through a translator Wednesday.

The Dodgers obviously think flip-flopping Kershaw and Ryu is the right move, with manager Dave Roberts saying it allows both pitchers to have five days’ rest between starts. If Kershaw started Game 1, he would be on four days’ rest, while Ryu would be on six days’ rest.

Kershaw starting the opener has always been the surest sign that it’s October. The face of the franchise has started eight of the past 10 postseason Game 1s. He can opt out of his contract after the World Series.

“He obviously wanted to pitch Game 1 and expected to,” Roberts said. “But after talking to him and explaining our thoughts, he accepted it and he just said he’ll be ready to go for the second game.”

Kershaw often has started on short rest in recent postseasons, but the Dodgers don’t plan on that this time. Rookie Walker Buehler is set to go in Game 3, having impressed enough to be the heir apparent to Kershaw.

“It doesn’t have to all fall on his shoulders like it has in the past,” starter-turned-reliever Alex Wood said of Kershaw.

Slugger Matt Kemp added, “We got a lot of guys who can get the job done.”

Ryu is eager to make a mark after not pitching in the postseason since 2014, having been injured for most of the 2015 and ‘16 seasons. He was left off last year’s playoff rosters after going 5-9 with a 3.77 ERA.

“Finding out that I made the postseason roster, especially not making it last year, was definitely huge for me,” he said. “I’m going to go full throttle from the very first pitch in the very first inning.”

Ryu had an edge over the final month of the season, posting a 1.88 ERA after overcoming a groin injury. Kershaw, also injured this season, had a 3.89 ERA in September.

“I think it’s pick your poison between the two of them,” Wood said.

If needed, Kershaw could still start Game 5 in Los Angeles on normal rest, so the move allows him to be available twice in the best-of-5 series.

“If we get to that point, then we’ll have a discussion,” Roberts said.

Like the Dodgers, the Braves aren’t the same team they were a year ago.

Atlanta is back in the postseason for the first time since 2013, when they were beaten by the Dodgers in four games.

Under manager Brian Snitker, the Braves went from 72 wins in 2017 to 90 and the NL East title this year, surprising many with the quick turnaround.

“No one really followed us until the end of the season,” Foltynewicz said. “Just because we started off hot, no one thought we would continue being that good and we did the whole season.”

What the Braves lack is playoff experience, especially compared to the battle-tested Dodgers.

“We got a bunch of young guys that they had never experienced September either, having to win and chasing a division,” Snitker said, “and then it didn’t faze them a bit.”

Third postseason meeting between the teams. Los Angeles beat Atlanta in four games in 2013 NLDS, which was Braves’ last playoff appearance. Braves swept Dodgers in 1996 NLDS. … Dodgers outscored Braves 35-18 this season. … Braves have lost eight consecutive playoff series since sweeping Astros in 2001 NL Division Series. … Foltynewicz threw five solid innings, allowing one run and one hit with nine strikeouts and no walks, for 10-2 win over Phillies in final regular-season start. He gained momentum for the playoffs by giving up a combined three hits and three runs in his last two starts. … Foltynewicz had a 5.56 ERA, allowing seven earned runs in 11 1/3 innings, against Dodgers in two regular-season starts. … This is first postseason as a manager for Brian Snitker, who has been in Braves organization since 1977. Snitker, a top candidate for NL Manager of the Year, replaced Fredi Gonzalez early in 2016 season. … Freeman led NL with 191 hits, tied for lead with 44 doubles, finished third with .309 batting average and also finished in top 10 in RBIs (98) and runs (94). … In 67 games as leadoff hitter, Acuna hit .328 with 19 homers, 45 RBIs and 14 stolen bases to become a Rookie of the Year favorite. Acuna’s move to the top of the batting order sparked team’s surge to division title. Inciarte hit .223 in 54 games as leadoff hitter; Albies batted .234 in 40 games atop lineup. … Newcomb came within one out of a no-hitter against Dodgers on July 29, allowing one hit in 8 2/3 innings of 4-1 win. … Dodgers went 45-37 at home and head into playoffs having won 14 of 18 overall. … Dodgers took two of three vs. Braves in LA from June 8-10 and three of four in Atlanta from July 26-29. … Buehler has emerged as Dodgers’ second-best pitcher behind Kershaw after starting season at Triple-A Oklahoma City. Buehler limited hitters to .193 batting average, while striking out 151 against 37 walks in 24 regular-season games, including 23 starts. … Buehler had the second-lowest WHIP (0.92) and opponents’ on-base percentage (.249) among rookie pitchers with 20 or more regular-season starts since 1913. … Dodgers dig the long ball. Their 235 homers were a franchise record and led the NL.

Braves: NL East champion Atlanta (90-72) was expected to improve this season, but was not projected to be far along enough in its rebuild to challenge for a postseason spot. Snitker, however, guided team to a huge jump from 72 wins in 2017, when Braves finished 25 games behind first-place Washington, and their first division title since 2013. … The “Baby Braves” grabbed most of the attention, with Acuna, 20, and Albies, 21, making major contributions with their power and speed. Equally important was Markakis adding depth to middle of the lineup, Freeman having a full healthy season and Camargo providing stability at third base. Since the All-Star break, Camargo had 10 homers and 37 RBIs while Freeman had seven homers and 37 RBIs. … Rotation lacks a true No. 1 starter, though Snitker said Foltynewicz has grown into that role this season. Sanchez has been perhaps the biggest surprise, adding depth to the rotation with his consistency. Newcomb at times looked like an emerging foundation for the staff but he faded with a 4.57 ERA after the All-Star break, including a 6.75 mark in five August starts.

Dodgers: NL West champion Los Angeles (92-71) is looking to return to the World Series after losing Game 7 at home against Houston last year. Dodgers haven’t won it all since 1988. … Los Angeles will try to win a Division Series for third straight year. Dodgers swept Arizona in three games last season and edged Washington 3-2 in 2016. … Dodgers went from second-most wins in team history (104) last season to 92 this year, and from dominating the NL West to needing Game 163 tiebreaker victory over Colorado at home to clinch their record sixth consecutive division title. … Deep and talented Dodgers platoon at several positions and often shuffle their lineup based on opposing pitcher. With the Braves likely starting at least three right-handers, maybe four, established right-handed hitters such as Chris Taylor (.254, 17, 63, team-high 178 Ks in 155 games) and David Freese (.282, 9, 42 with Pirates; .385, 2, 9 with Dodgers) could often be on Los Angeles bench during series.

— Short Order. Swanson’s status might not be known until Wednesday due to soreness in the upper part of his left hand. He partially tore a ligament on a swing during the final week of the regular season and left the game. Culberson, who has hit .282 with eight homers in the second half, would be the replacement at shortstop. That would force the Braves to have another player, possibly Ryan Flaherty, on their bench as a backup infielder.

— Kenley the Closer. Jansen allowed 18 homers this season, more than twice as many as his previous career high. He gave up back-to-back home runs in the division tiebreaker against the Rockies, although he was pitching with a comfortable lead. Jansen had heart issues during the season and said he’s going to need surgery. But the Dodgers need him to be his old dominant self in the playoffs.

— On The Bench. Snitker said he feels good about Lucas Duda’s availability to pinch-hit after Duda was limited late in the season by a sore back. Duda offers power from the left side.

— Super Max. Muncy got called up in mid-April, homered in his second game and has been the Dodgers’ big basher ever since. It’s quite a turnaround for a player who was released by Oakland and spent 2017 in the minors.