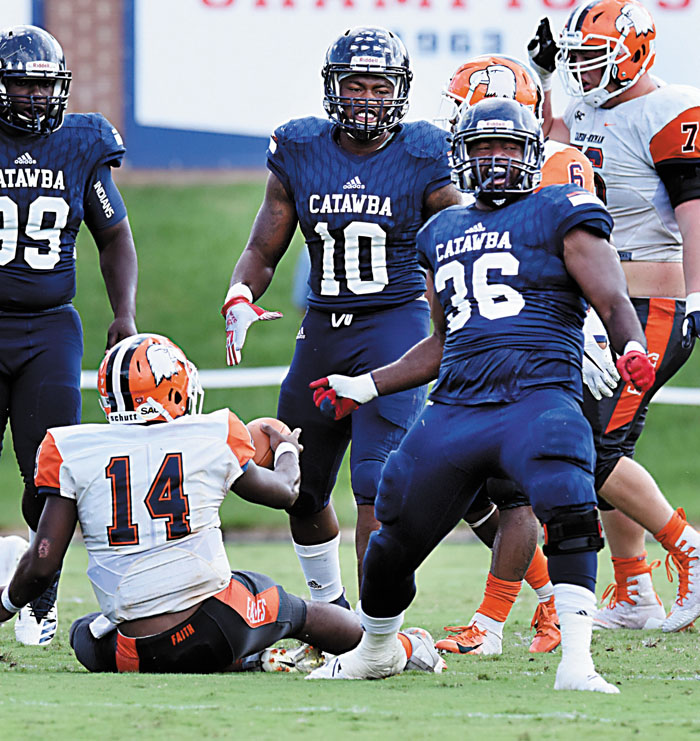 The 22-year-old defensive end, who has shuffled through various positions and been buried on depth charts at various schools, is finally getting a chance to make an impact.

“I’ve found a home at defensive end,” said Smith, whose sunny disposition has earned him his unusual nickname.

He’s been in on 20 tackles in four games. He had four solo stops, plus an assist, against Carson-Newman in Saturday’s excruciating, 33-30 overtime loss.

Smith suffered a knee injury as a junior, but he still was considered a future star as a high school senior in Conyers, Ga. He weighed about 220 then, bench-pressed 300-plus and ran a 4.7 40. He looked like a prototype linebacker, but the Heritage High Patriots (3-7) needed him to play other positions —  tight end, defensive end and defensive tackle.

Smith’s combination of size and speed drew recruiting interest from the big boys — Auburn, Florida State, Georgia Tech, N.C. State, South Carolina and Clemson. Most of those schools liked his potential as a fullback. He was a strong enough student that Princeton was intrigued.

One of 41 players from Georgia chosen to play in the  Florida vs. Georgia “Clash of the Scholar Athletes” All-Star Game, Smith served as defensive captain for the winning Georgia team.

That’s still his favorite sports memory because, until now, he hasn’t been in the right place at the right time since that all-star game in January, 2015.

“I was recruited by a lot of bigger schools, but then I didn’t get all the offers I would like to have had,” Smith said.

Tusculum, a Division II South Atlantic Conference school in Greeneville, Tenn.,  offered a full ride, so Smith signed. The Pioneers were thrilled to get him.

He redshirted as a freshman during the 2015-16 school year as coaching turmoil struck. Frankie DeBusk, Tusculum’s head coach for 18 seasons, was out, after a 4-7 year. So were both coordinators. A lot of Pioneers, including Smith, looked for a fresh start.

Smith transferred. His next stop was The Citadel. The Bulldogs didn’t have a scholarship available, but he joined the program as a preferred walk-on late in the spring in 2016.

The Citadel is a military school in Charleston, S.C. It provides a post-grad military option for its students, although it doesn’t have an automatic military obligation after graduation like Army, Navy or Air Force.

“I was in the ROTC program in high school, and I had thought about a military career and had aspirations in that area,” Smith said. “What I found out at The Citadel was that the military life wasn’t for me, but part of life is finding out who you are. I learned a lot about myself while I was there. No regrets. I’m glad I had a chance to experience all of it.”

On the practice field for the Bulldogs, Smith bounced around on both sides of the ball, getting a look as a linebacker on defense and as a B-back, the dive back in The Citadel’s triple-option offense.

He went at it hard, but well down the depth chart and certain that he wouldn’t be pursuing a military career, he started looking at other options. He arrived at Catawba in 2017.

“He wanted to play more than he was playing, and we knew we could give him an opportunity,” Walker said.

The challenge with regard to Smith has always been finding the right place to put him. He’s not huge at 230 pounds, but he’s not small. He’s in between. He’s tough and fast, but he’s not a sprinter.

Smith became a tight end for the Indians last year, backing up Jourdan Osinskie, an All-SAC, all-region caliber player. Smith played in nine games. He only made two receptions, but he was an aggressive blocker.

The great thing about Smith is that he is so athletic and so physical that he gives a coaching staff options. Osinskie is still around, and there wasn’t much point in under-using Smith’s talents as an occasional tight end.

The Indians took an extended look at him at linebacker in the spring before experimenting with him at defensive end. Bingo. That’s where it clicked .

“He brings the mentality of being very physical to the defensive line,” senior Omar Staley said. “He plays with everything he has, and he pushes everyone else to be better.”

Smith is pretty good now, and he’ll get better.

“I haven’t played defensive line since high school, but I like it,” Smith said. “I get to hit people, and that’s good. I’m working on consistency.”

Smith is an excellent student, with a high GPA as a communications major. He wants to go into sports management or public relations once he’s done with football. He’s listed as a senior, but he would have on-the-field eligibility in 2019 if he chose to go that route.

Like all the Indians, Smith’s season was interrupted by Hurricane Florence. That unscheduled week off — the home game with UNC Pembroke couldn’t be played —  got the Indians out of sync. They would have been favored to beat UNCP. Then they didn’t play well defensively at Mars Hill and came up one play short, despite excelling in a lot of areas,  against Carson-Newman.

So now they’re 1-3 and looking for answers. The Indians scored 63 points the last two weeks, but still went 0-2. That’s not Catawba football.

“Third down has been our problem,” Walker said.

Catawba shoots for holding teams to a 33 percent conversion rate on third down, but the last two weeks Carson-Newman and Mars Hill have converted 57 percent (17-for-30). Meanwhile, Catawba’s offense has been 10-for-28 on third down (35.7 percent). That’s the difference-maker in close games.

“We did our jobs and won on first and second down a lot against Carson-Newman,” Smith said. “The game plan was to get them in third-and-long and make them throw. But we got them in some third-and-longs, and they still made first downs by getting us on draw plays.”

The most telling plays in the loss to Carson-Newman  were the Eagles converting third-and-5 and third-and-7  with running plays during their 75-yard march in the fourth quarter that transformed a 24-20 Catawba lead into a 27-24 deficit.

“We’ve got to bow our backs on third down,” Smith said. “That’s been the emphasis, and we’ll do better.”

The Indians will try to get back on track Saturday with a 1:30 p.m. home game against Albany State, a team that has played a stiff schedule, suffering losses against Valdosta State, Tuskegee and West Georgia. Albany State (2-3 has won its last two.

NOTES: A concern moving forward is the health of starting QB Reid Carlton, who played through pain on Saturday. Carlton hurt his hip in the Mars Hill game, and then hurt a knee against Carson-Newman. He’s banged-up and it affected his throws Saturday.  Walker said the Indians will know more later this week. Kenny Avent III would be the next man up. … Staley, a senior defensive lineman who blocked a PAT on Saturday, is the nephew of South Carolina women’s basketball coach Dawn Staley. She starred in the WNBA and carried the American flag in the 2004 opening ceremonies at the Olympics. … Walker is pleased with Catawba’s rising rushing numbers. The offensive line is playing well. Right tackle Demetrius Blackwell represented that group at Tuesday’s press conference. “We’re just doing our jobs,” Blackwell said. “We don’t have to make a very big hole for our backs to make something happen. We’ve got special guys running the football.” … A junior who is a two-year starter, Blackwell was recruited by current Salisbury High head coach Brian Hinson. He’s from Spring Lake, near Fayetteville. He said his family was very close to having to evacuate their home in the aftermath of Hurricane Florence, but things turned out OK.

‘Roval’ a smashing success for all except Jimmie Johnson