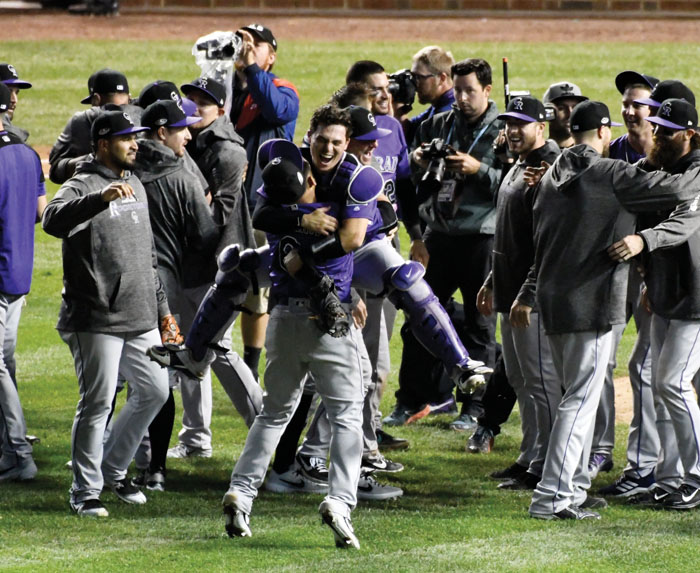 By JAY COHEN, AP Sports Writer
CHICAGO (AP) — Tony Wolters hit a tiebreaking single with two outs in the 13th inning and the Colorado Rockies beat the Chicago Cubs 2-1 on Tuesday night in an epic NL wild-card game.
In the longest win-or-go-home postseason game in major league history, Wolters entered as part of a double switch in the bottom of the 12th. The reserve catcher came up with runners at the corners and drove in Trevor Story with a liner back up the middle off losing pitcher Kyle Hendricks for his first hit since Sept. 10, quieting the crowd of 40,151 on a crisp fall night.
After playing its third big game over three days in three different cities, Colorado now heads to Milwaukee to open a best-of-five Division Series against the NL Central champion Brewers on Thursday at Miller Park.
Scott Oberg, the sixth Colorado pitcher, fanned Kris Bryant for the final out of the 12th and then struck out the side in the 13th to end the longest postseason game in Wrigley Field history. Terrance Gore tried to sell that he was hit by a pitch, but was sent back to the plate after a replay review confirmed the initial call.
After Albert Almora Jr. struck out swinging for the final out, Wolters ran out and grabbed Oberg. They were soon joined by the rest of the excited Rockies in a rollicking purple mob near the mound.
It was Wolters’ playoff debut and just the second postseason game for Oberg. Previously, the longest winner-take-all games in the postseason were 12-inning affairs in the 2014 AL wild-card round and Game 7 of the 1924 World Series.
It had pretty much everything, too. Hendricks was the third starting pitcher used by the Cubs, after Jon Lester worked six solid innings and Cole Hamels was pressed into action after the teams were tied at 1 after nine. Rockies third baseman Nolan Arenado exchanged a memorable hug with Javier Baez after he tagged the excitable Cubs star in the 11th.
Colorado moved on to the Division Series for the first time since 2009. The Rockies lost to Arizona in the wild-card game a year ago.
Chicago made it to the NLCS in each of the previous three seasons, winning the 2016 World Series to break a 108-year drought, but it was plagued by an inconsistent offense all season long. The Cubs finished with just six hits and left 10 runners on base after managing only three hits in Monday’s 3-1 loss to the Brewers in the NL Central tiebreaker.
This time, it was Kyle Freeland cruising through manager Joe Maddon’s lineup.
Starting on three days’ rest for the first time in the pros, Freeland struck out six in 6 2/3 scoreless innings. The Denver native looked quite comfortable in his first career playoff appearance, helping his hometown team bounce back from Monday’s NL West tiebreaker loss to the Dodgers in Los Angeles.
Lester helped Chicago stick around by matching a career playoff high with nine strikeouts in his 26th postseason appearance. But he took a little while to settle into the game, and the Rockies took advantage.
Charlie Blackmon led off with a five-pitch walk. DJ LeMahieu followed with a ground-rule double on a 3-2 pitch — with the ball getting lost in the famed ivy in left-center — and Arenado’s sacrifice fly drove in Blackmon.
Lester then limited the damage by striking out Trevor Story and Matt Holliday with LeMahieu on third.
That one run looked as if it might hold up as Freeland cruised into the seventh. After Story robbed Daniel Murphy of a hit with a diving grab at shortstop in the seventh, manager Bud Black replaced Freeland with Adam Ottavino.
Chicago loaded the bases with two outs, getting some help when Drew Butera was called for catcher’s interference, but Ottavino struck out pinch-hitter Jason Heyward to end the inning.
The Cubs got another chance when Anthony Rizzo singled with two outs in the eighth, and Maddon went for it. He ran for his star first baseman with speedy Terrance Gore, who promptly swiped second.
Ottavino had an 0-2 count on Baez when his third pitch got too much of the plate. The free-swinging slugger drove it into the gap in left-center for a tying double, easily scoring Gore from second and sending a charge through the crowd.
___
More AP MLB: https://apnews.com/tag/MLB and https://twitter.com/AP_Sports