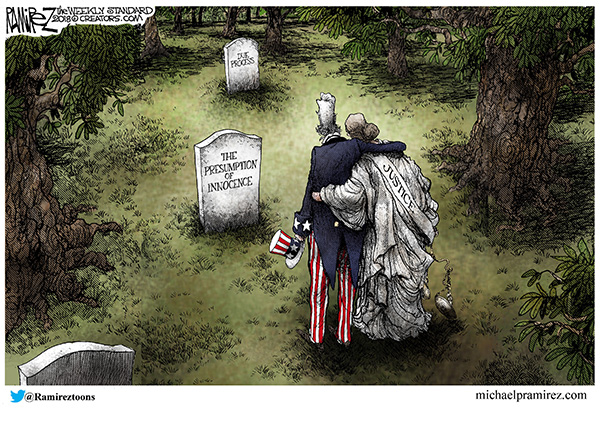 From a column by Michael Ramirez, a political cartoonist with Creators Syndicate:

The sad truth is, there are people willing to destroy a person’s life and career based on little evidence, for political reasons, as part of a political process to delay a nomination. They should be ashamed of themselves. Ultimately, specious charges such as these undermine real and serious cases of harassment and sexual assault.

It was a better time. The United States Senate understood its constitutional role.

What has been revealed is that today, there are senators who barely understand our constitutional rights or due process. Due process is so important to the cause of justice that it was reiterated verbatim in the 14th Amendment.

Perhaps those championing this latest smear campaign against Judge Kavanaugh should go back and read the Fifth, Sixth and 14th amendments. We have come to another junction in our history where the nation has to make a choice, and this choice will determine whether America will remain the beacon of liberty.

There are those who claim this is just a job interview. Whether in a court or in an office, is it unreasonable to ask that fairness, logic and justice be a fundamental part of the process? America is an extraordinary country because we have always represented justice. May justice prevail.