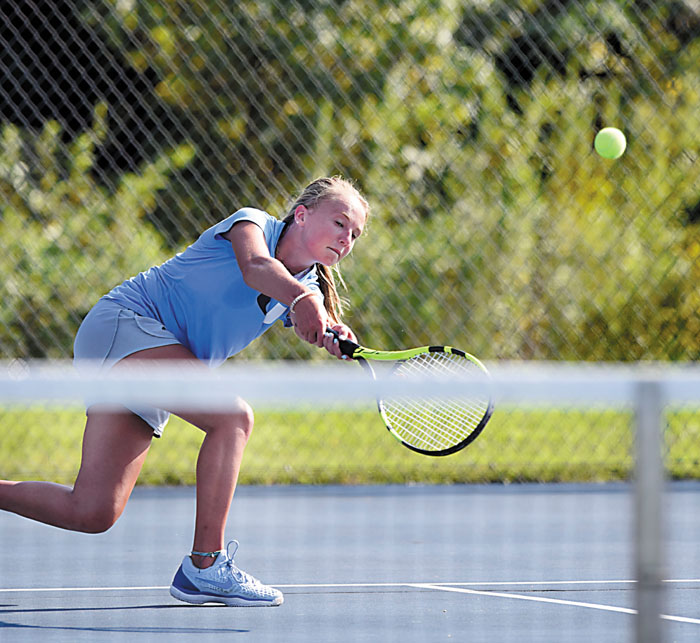 Wayne Hinshaw FILE PHOTO/for the Salisbury Post ... Lacy Waggoner, playing No.3 singles for West Rowan, had an epic volley and rallied for a 3-6, 7-6, 11-9 victory against South Iredell on Tuesday at Mount Ulla. The Falcons won the match, 7-2, staying in first place in the NPC.

MOUNT ULLA — It is West Rowan’s turn to chase history.

“There are no conference banners for tennis is our gym,” fourth-year coach John Brown said. “There’s one from 1977 for winning the Western State title – so that team may have won a conference. But there’s no recent history of us winning one.”

There may be soon. West (14-1, 8-1 NPC) has secured at least a tie for the league crown with only Thursday’s regular-season finale at North Iredell remaining. The Falcons lead Carson by one game in the standings and South Iredell (10-6, 6-3) by two.

“This is crazy,” team-leader Payton Holt said after winning at first singles and teaming with freshman Lacy Waggoner to prevail at first doubles. “My freshman year we were happy not being last. This year we have a chance to be conference champs.”

West, a 5-4 winner when the teams met on Sept. 13 in Statesville, captured five of the six singles matches to decide it. South was short a key player — junior Faith Hettinger at No. 3 singles, who missed school with an illness. In her place, freshman Kaitlyn Crabb lost an epic battle with Waggoner, who rallied from a 5-2, second-set deficit to win 3-6, 7-6 (7-5) and 11-9 in a 10-point tie-breaker.

“I was just happy I won,” said Waggoner, now 14-1. “That girl just never gave up. She was in really good shape. She knew if I got up, it would be very hard for her to come back.”

The tie-breaker featured a six-and-a-half minute, 150-stroke exchange that Waggoner finally won on an unforced error to tie the score 9-all.

“Good God, what a volley that was,” said South coach Tiffany Elledge, a West Rowan Middle School coach from 2006-15. “They both moved each other around really well. The West Rowan girl had a nice drop shot and that’s what won the point.”

Brown felt the matches at third, fourth and fifth singles would tell the tale. West won two of those three, including Waggoner’s exhausting triumph that secured the outcome.

“It was almost easy to write Lacy’s match off,” he said. “She lost the first set and was down badly in the second, but she fought all the way back. And in all my years of coaching, I’ve never seen a rally last that long. They were just keeping the ball on the court and waiting for someone to make a mistake.”

Holt made very few in her 6-1, 6-3 win against South’s Emily Mattei. The hard-hitting senior has won all 15 of her matches and hasn’t lost a set this season.

“In the first set, I was dictating, coming to the net and placing shots where I wanted them,” Holt said. “In the second, I felt more defensive. (Mattei) was starting to figure me out, so I began trying to hit it right at her body. That gave her less time to react.”

Teammate Madison Smith prevailed 7-5, 7-6 (7-5) in a tough, second-singles battle with freshman Niyati Kanekar. Smith trailed 3-2 in the opening set before rallying and struggled to wrap it up. “I was tired, but I knew from the beginning this match was going to be tiring,” Smith said.

West’s Skylar Jahnke quickly pinpointed the reason she lost in straight sets to Sruthi Mannepalli at fourth singles. “She was more consistent,” Jahnke said after falling 6-2, 6-2. “And I seem to get upset very easily. That’s what messes me up. I can’t keep a clear head. But I know it takes playing someone better than you to get better.”

“I started out losing 4-0,” White reported. “Then Brown told me to start tapping the ball instead of hitting so hard. I was getting a little reckless. After that I just played my game and stayed focused.”

At No. 6 singles, West sophomore Gracie Wise took a 7-5, 6-4 decision against South’s Catherine Chapman. Wise (4-2) filled in for unbeaten teammate Kelsie Crider, who is nursing a foot injury.

“I was just excited to play today,” Wise said. “It takes a lot of energy to come up one seed, but I was ready to win for the team.”

Now the Falcons need one more to make history — and earn a well-deserved banner.

“The key now is for them to take Thursday very seriously,” Brown said. “These girls can’t get so high that they think Thursday is a given. It never is.”

NOTES: West beat North Iredell 7-2 in a four-hour match on Sept. 18. … Holt and Waggoner prevailed 8-3 in first doubles and Janhke and White earned an 8-2 win at third doubles. Smith and Wise fell 9-7 at second doubles. … The NPC tournament is scheduled Oct. 9 at North Iredell.