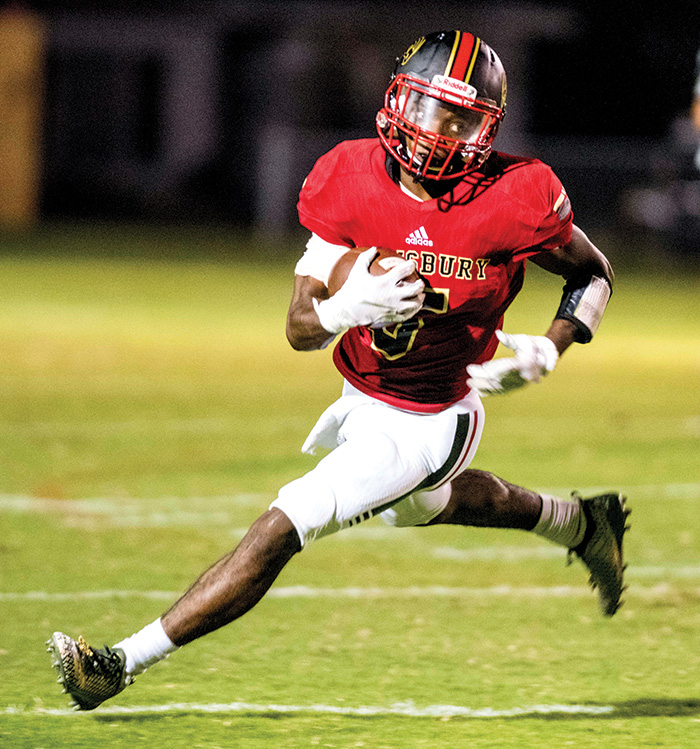 SALISBURY  — Jahbreel Russell has been a jack-of-all-trades for the Salisbury football team.

Some H-back when the Hornets employ a two-back set, some running back and some cornerback.

Prior to Friday’s 41-7 Central Carolina Conference win at Central Davidson, Russell’s season totals were five catches for 43 yards and 11 carries for 95 yards. He hadn’t scored a touchdown. He’d had only 16 touches on offense in five games.

But this was a “next man up” situation.

“Raheim Walker was out, so a lot of the ball-carrying responsibility at Central Davidson went to Jahbreel,” Salisbury head coach Brian Hinson explained. “He did really well. He hit spots well.”

When Russell (6-0, 190) learned he’d be the main running back for the first time in his varsity career, he set goals for himself that seemed a little lofty, almost unrealistic.

But he achieved all of them.

“They always want us to set goals and I figured 15 touches, so my goals were three touchdowns and 100 yards,” Russell said. “I expected to do well because I knew the team really needed me to do well. I tried to be a beast with the ball, and our offensive line had the best game they’ve played. I just hit the holes and got what I could get.”

Russell got 16 touches — 15 carries and a 27-yard reception. He scored the game’s first three touchdowns as Salisbury took charge at halftime, 21-0. He finished with 150 of Salisbury’s 242 rushing yards. It was a career night in a lot of ways for an athlete who unselfishly helped Salisbury’s basketball team go 25-4 last winter.

“In basketball he was a Dennis Rodman type, getting after it on defense and rebounding like crazy,” Hinson said. “He was always playing against much bigger guys, but he was so physical that by the time the fourth quarter came around the guy he was guarding had usually quit. Guys just got tired of having to mess with him.”

Two of the chiseled Russell’s TD runs on Friday were short bursts at the goal line, but he shrugged off defenders and went 29 yards on the one that made it 14-0.

“On the long touchdown, a guy grabbed my jersey and was trying to pull me down, but we never want to let that first guy tackle us,” Russell said. “I was able to break away from him and keep going.”

Russell broke through that initial hit around the 20-yard line, and then dragged multiple tacklers to the end zone.

“His yards after first contact on Friday were just phenomenal,” Hinson said. “He brought that same physical style to running the football that he brings to basketball.”

Salisbury started the season 0-2, with disappointing losses to North Rowan and Carson, but is now 4-2 overall and 4-0 in the CC.

Salisbury’s offense, the county’s shakiest and most dysfunctional in the early going, has picked it up. The Hornets’ last three scores have been 48-18, 40-13 and 41-7.

“We weren’t very good early in the season,” Hinson said. But our defense has been there for us all along, and we’ve gotten better on offense in the last month.”

Salisbury will still be a serious underdog when it takes on CCC bullies Ledford (Oct. 12) and North Davidson (Oct. 26), but everything has flipped from those dismal early weeks. The Hornets appear headed for another winning season and a playoff berth.

“We went into Friday’s game with the mindset of dominating, and that’s what we did,” Russell said.

Salisbury is exceptionally young, especially on defense, but there are seniors like Russell who are getting it done whenever their number is called.

“He’s not only a tremendous athlete, he’s a charismatic guy with a big smile,” Hinson said. “His teammates were excited to see him have the kind of game he had.”

High school seniors use tennis tournament to give back…