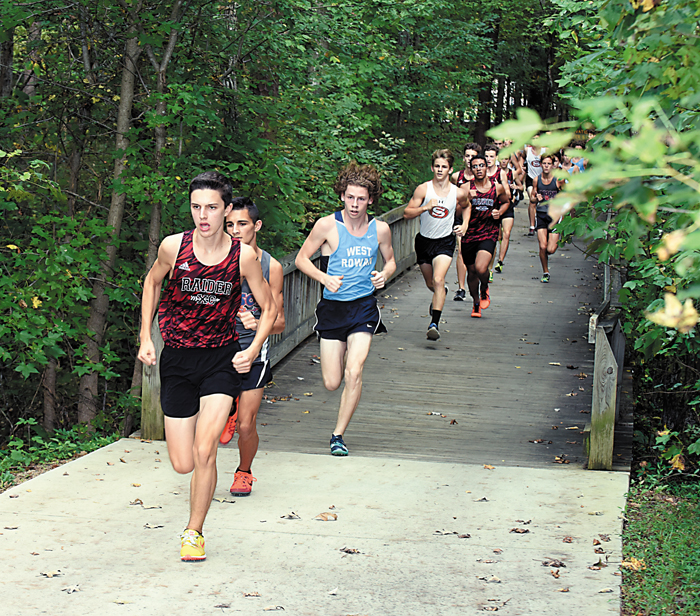 Wayne Hinshaw/for the Salisbury Post South Rowan’s Noah Julian, the eventual winner of the boys’ race, leads Zac Barbee (Carson) and Thomas Waldo (West Rowan), along with the rest of the field.

The Raiders were a distant fifth in the Rowan County Championships in 2015, putting up a score of 159, 140 points behind Carson. The fastest Raider finished 26th. The second fastest, a stocky freshman named Ari Moya, chugged home 30th in 22:01.

On Tuesday afternoon at Dan Nicholas Park, Moya charged across the finish line in fourth place and in a personal record 5K time of 17:40. He was a major part of  a team championship, the first for South’s boys in the county since 2007.

“It means a lot because my freshman year we were struggling just to have a team,” Moya said. “But now it’s getting really serious. Now we’re in contention for championships, and it does feel good.”

“All our guys came through today with PRs,” South coach Scott Julian said. “I really don’t want to single anyone out because I think we got the most out of every single one of our guys, but Ari did run a fantastic race. I’m happy for him. He works so hard.”

Julian’s own hard-working son, Noah, set the pace for the Raiders and the county. The sophomore won the race in a personal best of 16:59. He was clocked in 17:25 last fall when he finished second in the event to East Rowan’s Sean Incardona.

Julian is South’s first individual champion since Michael York in 2010.

“I really wanted to break 17 minutes today, and I’m coming across that finishing bridge and I could see the clock ticking,” Noah said. “I could hear my parents and my uncle yelling for me to come on, and I made it. I’m really happy with today, happy with my progression as a runner, happy with my team.”

“I’m one of those runners who really prefers to run on someone else’s shoulder, but it was clear today that Barbee and Waldo wanted me to lead the race,” Julian said. “I ran my race. I kept pushing.”

Barbee wanted to make a move a few times as the runners stormed through the woods.

“I was pretty close to Noah that first mile, but then he took off,” Barbee said. “I got within sight of him a few times, coming around bends, but he kept a great pace. He never slowed down.”

The other runners in the top five for South were junior Ian Waugh (6th), sophomore Nolan Miller (8th) and sophomore Landon Cromer (16th).

The top 12 runners will be on the all-county team, with Salisbury’s Michael Lowry grabbing the final spot. He edged West’s Damian Ackman by less than a second.

South will hope to be at its best again in two weeks when the Central Carolina Conference meet is contested at Salisbury Community Park.

“We haven’t run in a lot of invitationals this year,” Coach Julian said. “But our legs are fresh, and it looks like our guys are peaking at the right time.”