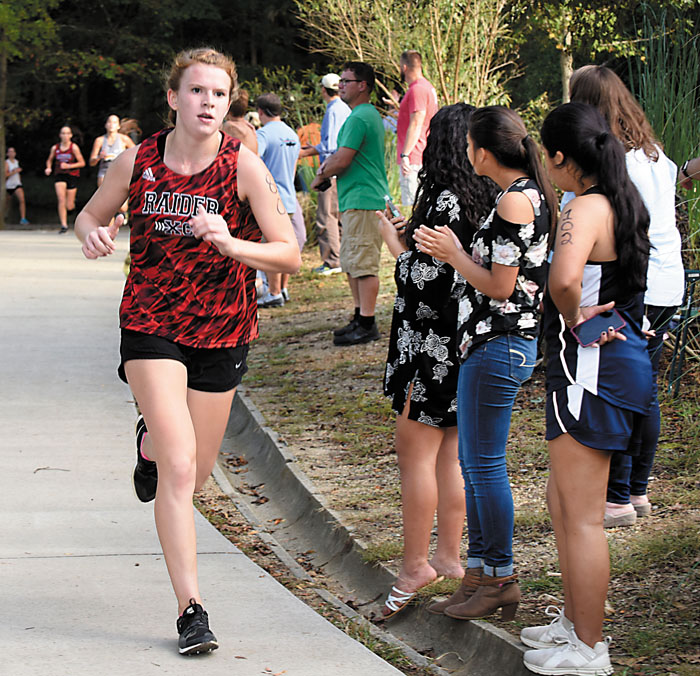 SALISBURY  —Somewhere out in woods at Dan Nicholas Park on Tuesday evening, South Rowan junior captain Madison McGuire had a misstep and plunged to the ground.

Knees and elbows were muddied and bloodied.

But McGuire knew she couldn’t stay down more than a few seconds. South’s girls only have five runners, the minimum to post a team score, and every point counted in the Rowan County Championships.

“All year, with five runners, it’s been difficult, but it’s also been exciting,” McGuire said. “I didn’t want to let anyone down. I was getting back up.”

McGuire finished seventh, although when she reached the finish line, only the runners close to her knew about the drama that had unfolded in the trees.

South freshman Bethany Rymer, a basketball-first girl, who took up cross country only recently, clocked 20:53 and was the individual champion.

After the loss of Madison Lowery, last year’s individual  county champion, to transfer, South wasn’t expected to win any championships. But Rymer made it possible with a determined effort.

“There’s a loop on this course that seems to last forever,” Rymer said. “That’s when I felt tired, but I pushed through it.”

“When you’ve only got five girls, everyone has to bring it, and they all did,” South coach Rebekah Julian said. “They went out there and tried to beat every runner they could beat, no matter what school they were running for.”

Carson junior Taylor Conrad, one of the favorites, ran with Rymer for a good portion of the race, but succumbed to dehydration and heat exhaustion. She was treated at an urgent care facility immediately after the race and received an IV. She doesn’t remember the latter stages of the race at all, but her legs never stopped moving. Somehow she finished fifth (22:05) to lead the Cougars to second place.

Salisbury had two of the top runners. Leah Cressler placed third (21:48), while Ellen Simons was sixth.

The top 12 finishers will be on the all-county team.

Carson’s girls had been the dominant program in the county in recent years, with championships in 2014, 2015 and 2017 and a runner-up finish to Salisbury by a single point in 2016.

This was South’s first girls cross country title in more than a decade. South is the first girls program since West in 2012, when it had Rebecca Parker, to sweep the team and individual titles.

“We’ve talked up the David vs. Goliath theme all year,” Julian said. “We’re a small team, but we’re strong. When you’ve got five, none of them can have a bad day, and none of them did. They did exactly what they’ve been training to do.”