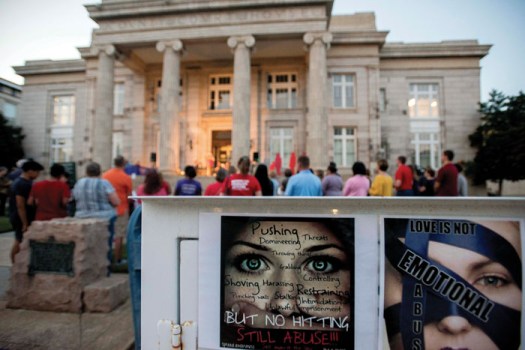 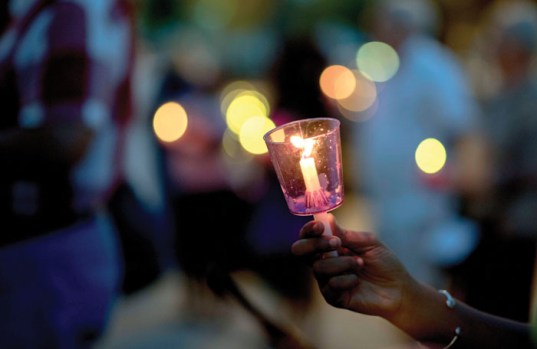 A candle glows in the evening light during the domestic violence vigil. Jon C. Lakey/Salisbury Post 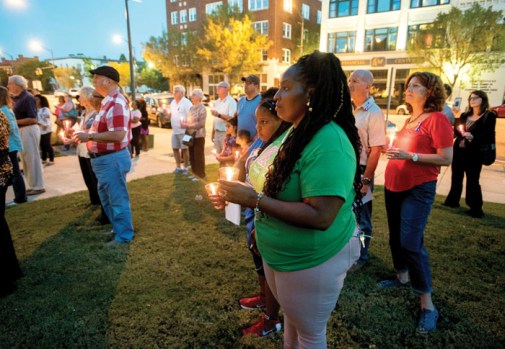 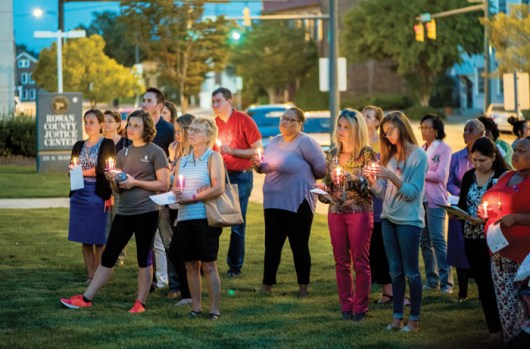 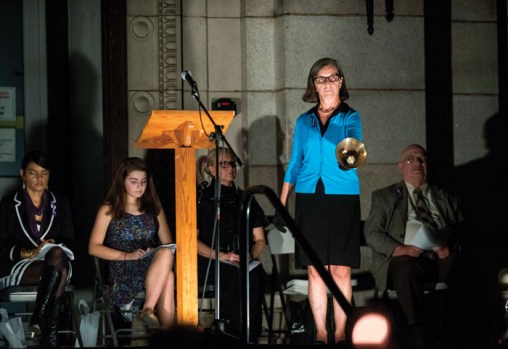 Patsy Wilson rings a bell, one peal for each of the 60 people who died in North Carolina last year from domestic violence. Jon C. Lakey/Salisbury Post

SALISBURY — Dr. Lissette Torres was a psychotherapist counseling patients about their personal struggles, all the while suffering in silence in an abusive relationship of her own. It would take her 20 tortuous years to work up the nerve to escape the abuse.

Torres and other speakers came together with supporters in hopes of shedding light on an ever-mystifying subject.

“He psychologically and physically put me through torture,” she said of her abuser.

She tried to answer the question many survivors get: “Why don’t you leave?”

Torres said her significant other was well-connected in their community and he’d threatened to kill her and their children. He even once tried to light her and the children on fire as they attempted to leave.

Torres said she used to call herself a victim, and then a survivor. Now she’s a victim no more. She calls herself a warrior.

She asked everyone to help bring awareness to the issue of domestic violence, “before more lives are lost.”

Also at the vigil, WBTV reporter David Whisenant shared his experience of coming face to face with domestic violence through the stories he covers. He told of one husband who killed his wife, and friends insisted he was a “good guy.”

Salisbury Police Department Officer Rebecca Sexton said, like Whisenant, she struggled with what to say to those assembled. Both said they prayed about finding the right words.

Sexton said she often goes to crime scenes where someone has died as a result of domestic violence. Some neighbors say they witnessed abuse and mistreatment but never said anything, she said.

She encouraged people to not wait until it’s too late to speak up.

When she thought about what to say, Sexton said, she thought of two words fear and free. Fear, she said, is aroused by the perceived threat of danger. Free means to not cost a thing.

“Fear is powerful, but so is free,” she said.

“This curse that keeps on repeating itself has to stop,” Sexton said.

The candles participants held filtered into the impending darkness as Patsy Wilson rang a bell, one chime for each person who died from domestic violence in North Carolina over the past year. From October 2017 to the end of September, there were 60 deaths in North Carolina, including one in Rowan County.

Shanikka Gadson-Harris said she felt it was important to attend and bring her daughter. When Gadson-Harris was 15, she began dating a guy who would soon physically abuse her. She walked away at 19.

It took 17 years to receive an apology from him, and today they are cordial. Gadson-Harris said she doesn’t understand it all, but she has been able to share her story with the at-risk students she teaches.

“I thank God I was strong enough to get out,” Gadson-Harris said.

Robert Tardell said he attended the vigil to show support.

“The shear number is ridiculous,” he said of the victims.