Watch out for that Wheel bug bite 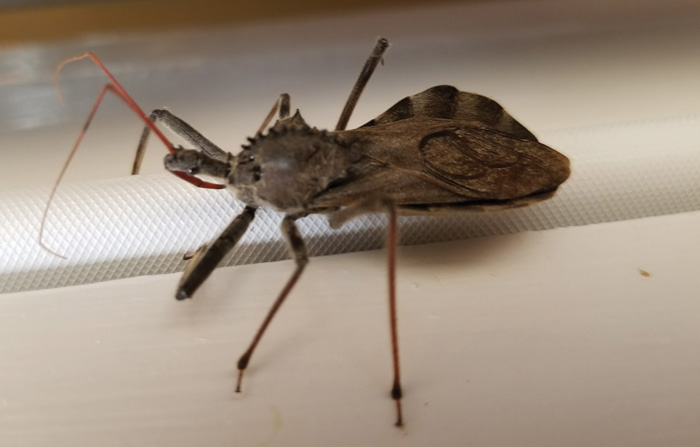 The wheel bug distinguishes itself by displaying a ‘half wheel cog’ upright and perpendicular on its back.

There was a strange looking bug that fell out of our oak tree earlier last week. It was rather large and looked like a strange stink bug, but it was much larger than normal stinkbugs and somewhat aggressive.
The insect is, in fact, a wheel bug (Arilus cristatus), one of the largest insects in the assassin bug family. This insect is a true bug (Hemiptera sp.); the chief identifying characteristic of this insect order being the triangular shield on its back.
This insect distinguishes itself from other true bug relatives by displaying a “half wheel cog” upright and perpendicular on its back.
Wheel bugs are considered beneficial insects which feed voraciously on caterpillars. Wheel bug nymphs (juvenile insects) feed on smaller insect pests such as aphids.
Wheel bugs are to be observed and not handled as a pet. If handled carelessly, they inflict a painful bite more powerful than a hornet or wasp sting. (I can attest that this is a very true statement, having experienced such a bite).
Injury from a wheel bug bite takes about 10 days to heal and may leave a small scar.
Learn more at https://growingsmallfarms.ces.ncsu.edu/2018/06/birth-assassin-bug/