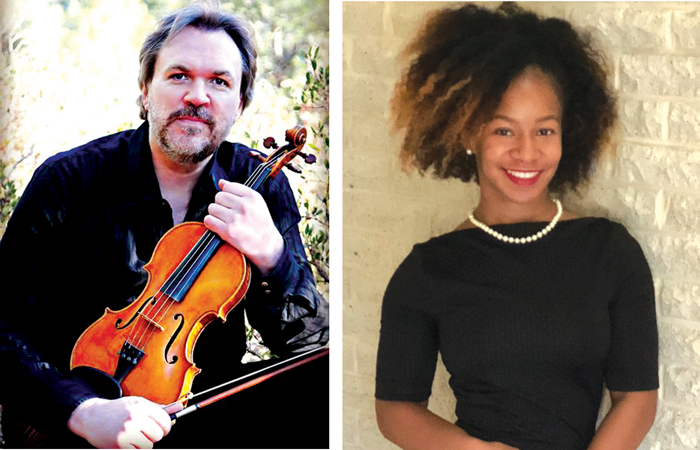 On Oct. 6 the Salisbury Symphony will be performing a concert of American music whose title feature will be a work by one of the most prolific American composers living today, a musician whose specialty is the fiddle but whose work deftly crosses the boundaries between classical, jazz, western, folk and many other genres of music.

And he lives near Lake Norman in North Carolina!

Mark O’Connor is widely acknowledged as a master fiddler, but his incredible array of musical interests have led him in at least a hundred different directions. On his website he calls himself “an Americana, bluegrass, blues, classical, country, folk, jazz artist.” Even so, you might get the feeling that O’Connor would rather not limit himself even to this long list of descriptive terms.

O’Connor’s compositions have been played by internationally famous musicians as diverse as cellist Yo-Yo Ma, opera singer Renée Fleming and country music singer Rosanna Cash. His work has also been performed by the London Philharmonic Orchestra, the Metamorphosen Chamber Orchestra, the Chicago Symphony and the Colorado Orchestra, among others.

The “Mark O’Connor Band” — his latest musical project, composed mostly of members of his family — has performed at the Grammy Awards Premiere Ceremony, received standing ovations at the Grand Old Opry and their debut album, “Coming Home,” reached the No. 1 spot on Billboard’s Top Bluegrass Albums chart. In 2017 the band was invited to open for the Zac Brown Band’s 2018 summer tour.

And it is this remarkably prolific musician whose work “Americana Symphony” will be performed by the Salisbury Symphony on Oct. 6. The symphony depicts “the early American experience of westward migration, of the drive and optimism that drew people across the country to new opportunities in the West.“

Also on the program will be a soprano soloist whose name will be familiar to those who attended the Symphony’s performance of “The Messiah” last December… the bubbly, irrepressible Anyeé Farrar, who will be performing Samuel Barber’s “Knoxville: Summer of 1915.” Currently in her first year at the College-Conservatory of Music, University of Cincinnati, she graduated just last year from the North Carolina School of the Arts in Winston-Salem and while she was there she was a member of the choir at First United Methodist Church in Salisbury. So this event will feel “a bit like coming home” to her.

Though she is young — just 22 years old — and somewhat petite in stature, Farrar’s singing packs a surprising punch. She has a particularly confident and fresh delivery, a voice that even non-opera lovers will find moving and inspirational.

Farrar’s interest in opera began in high school at the Governor’s School for the Arts in Norfolk, Virginia. At the University of North Carolina School of the Arts she was named a Fletcher Scholar and awarded a scholarship reserved only for exceptional undergraduates. Most recently, Ms. Farrar was seen on the main stage of the Stevens Center performing the role of Clorinda in Rossini’s La Cenerentola and Edith in Gilbert and Sullivan’s Pirates of Penzance.   Locally she has been featured as the soprano soloist in Bach’s Cantata 80 and Handel’s Messiah, both with the Salisbury Symphony Orchestra.

Ms. Farrar will perform “Knoxville: Summer of 1915” by American composer Samuel Barber (1910-1981). Barber adapted excerpts from the poems of James Agee, who wrote of the last summer evenings of his childhood in Knoxville, the idyllic year before everything changed for Agee and his family. Agee’s father was tragically killed in a car accident the following year, forever changing the poet’s life; the family left Knoxville, never to return.

Also performing on Oct. 6 will be the newly formed Salisbury Symphony Chorale in just their second year of existence. The Chorale will perform Robert Maggio’s “I Hear America Singing,” inspired by the poem of the same name by Walt Whitman, as well as selections from Randall Thompson’s “Frostiana,” a work which is based upon the poetry of Robert Frost.

Starting to see a bit of a pattern here?

The Salisbury Symphony, directed by David Hagy, will perform “Americana” on Saturday, Oct. 6 at 7:30 p.m. Tickets and other details are available online at www.salisburysymphony.org