Many teens drink alcohol; rich ones abuse it more often 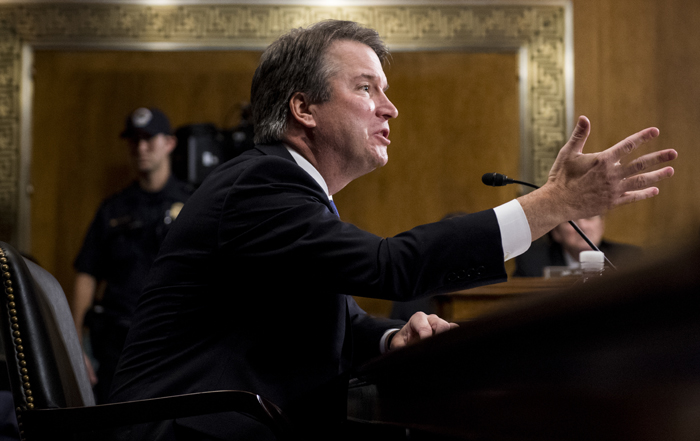 The woman who says he sexually assaulted her when they were teenagers described him as “stumbling drunk” during the alleged incident. A woman who said she was a friend of his at Yale recalled, “Brett was a sloppy drunk, and I know because I drank with him.” Kavanaugh’s high school friend Mark Judge, in his memoir, “Wasted: Tales of a Gen X Drunk,” chronicled blackout drinking at Georgetown Prep and included an anecdote about a “Bart O’Kavanaugh” character who drank, vomited and passed out.

While the boozy yearbook page might be attributable to youthful exaggeration, the outsize role of drinking among affluent teens like Kavanaugh’s classmates is consistent with the patterns seen in developmental psychology research. Over the past few decades — starting at Yale, then Columbia University’s Teachers College and now Arizona State University — my colleagues and I have been studying students in high-achieving, elite schools. These are institutions with excellent test scores, rich extracurricular and advanced academic offerings, and graduates headed to selective colleges and, ultimately, to positions of power as adults.

Across the country, we have recurrently found that students at such schools show higher rates of disturbance compared with average American teens. Their problems range from depression, anxiety and self-harm to random acts of delinquency and, yes, abuse of drugs and alcohol.

Not all these students are from wealthy families, but the majority are, and this enables rampant “social” substance abuse. There are always some students at these schools who have the means to buy alcohol and drugs — along with fake IDs of the best quality — and make them freely available to their peers.

Nationally representative data have, in fact, shown that teens who attend schools with high proportions of affluent students are much more likely than those at poorer schools to report intoxication and the use of illicit drugs. Inebriation, in turn, often presages casual sex, or hooking up.

By all reports, such parties were common at Georgetown Prep and Holton-Arms, the school attended by Christine Blasey Ford, the woman who accuses Kavanaugh of sexually assaulting her. “Drinking was part of the fabric of the school from the first day of freshman year to graduation,” a Georgetown Prep alum whose years there overlapped with both Kavanaugh’s and those of Justice Neil Gorsuch, has said. Even Gorsuch made a reference to alcohol on his senior yearbook page: “I am not an alkie,” he wrote.

Unfortunately, the norms of peer groups reinforce collective behaviors, at least among boys. Early in our research on teens from diverse backgrounds, we found that in an affluent, suburban high school, boys who reported frequent drug and alcohol use were rated by their peers as among the most well-liked; this was not true among their less-affluent urban counterparts. Suburban girls reporting frequent use also earned many “liked most” nominations but at the same time were named by many as “liked least,” reflecting ambivalence in their classmates’ attitudes.

The double standards are well documented: Boys who report high substance use and many sexual conquests are held in high regard and admiration by their schoolmates; their female counterparts may be socially sought after but at the same time are viewed with some disdain and scorn.

These double standards play out, naturally, in the rehashing of major social events. In the aftermath of a drunken night involving sex, there are inevitably feelings of shame among girls — especially when this involves multiple boys in one evening. There are also intense fears that the boys will boast about their conquests, and in fact they do — in person, on social media and, apparently, even in school yearbooks.

Peer attitudes are important, but so are parents, who can contribute to fostering excessive substance use. In affluent school settings, a substantial proportion of students believe that they would easily get away with even egregious, repeated substance use. These teens report that being caught using drugs and alcohol would lead to few real repercussions; in fact, they say their parents would treat these infractions more leniently than other errant behaviors, such as delinquency, academic indolence or insolence to adults.

As one student in an affluent suburb said: “If a kid here is caught with a DUI or distributing drugs, they might have to go to court, but they would be armed with their family lawyer. And of course given this, they almost always get off with no trouble.”

In his book “High Society,” Joseph Califano describes many instances of parents in affluent communities serving alcohol at parties for their high school children or looking the other way when their friends bring alcohol in. Califano, who founded the National Center on Addiction and Substance Abuse, also notes that “heavy-drinking teens have frequent blackouts and savage their memory, attention span, and spatial skills.”

“I liked beer; I still like beer,” Kavanaugh testified at Thursday’s Senate hearing, called to consider sexual assault allegations against him. But unlike his friend Judge, whom Ford said was present when Kavanaugh assaulted her, Kavanaugh has not acknowledged any blackout drinking on his part, then or now — and he grew combative with Sen. Amy Klobuchar, D-Minn., when she asked him about it.

“So you’re saying there’s never been a case where you drank so much that you didn’t remember what happened the night before or part of what happened?” she asked. He responded: “You’re asking about blackout. I don’t know, have you?” When the senator pressed for an answer, he again turned the question to her. “I’m curious if you have.”

Whether or not Kavanaugh was a problem drinker, it’s important to emphasize that the behaviors I’ve described are not necessarily limited to adolescence. Frequent substance use in high school can be linked with serious problems of addiction down the road. Among boys from high-achieving schools, we’ve found that as many as 40 percent of them can have diagnoses of drug and alcohol addiction by age 26; parallel rates for women were almost 25 percent. Both of these are at least twice the rates in national normative samples for men and women.

Most people have done things in their youth that, as adults, they might cringe about. But coordinated victimization of another young person — whether it is bullying in the hallways or having sex with a girl (or pinning a girl down) while watched by another boy — is not, thankfully, something most young men would do, inebriated or otherwise. But it is much more likely to happen among those who believe they might be above the law, thanks to their parents’ positions of privilege and power.

Have these problems around affluence worsened over time, in the United States or elsewhere? It is hard to know, because systematic research on this population is relatively new. Until the first findings, in the late 1990s, that substance use rates were much higher in a white-collar suburban school than in an impoverished urban one, few would have thought of affluence as a “risk factor.”

And yet, with accumulating evidence, a recent report on adolescent wellness listed the top four environmental risks as exposure to poverty, to trauma, to discrimination and racism, and to “extreme pressure to succeed or to outdo everyone else — often, but not exclusively, occurring in affluent communities.”

None of this is to disparage or dismiss students at high-achieving schools as “spoiled, rich brats.” These teenagers experience very high levels of stress, and the misbehaviors of a few do not detract from the real anxiety, depression and anguish of the many (if not most) who feel continuous pressure to achieve perfection.

Yet it would be prudent for us adults — parents, educators, policymakers — to pay heed to what research has clearly shown. When adults are sanguine about drunkenness and associated reprehensible behaviors among kids, there are potentially serious consequences for the victims, for the perpetrators and for an entire generation of young people as they form their own values about what is decent, what is excusable and what will simply not be tolerated despite the power and prestige of their parents.

So let us be mindful as we weigh these issues — because the children most certainly are listening.

Suniya S. Luthar is a professor of psychology at Arizona State University and professor emerita at Columbia University’s Teachers College.