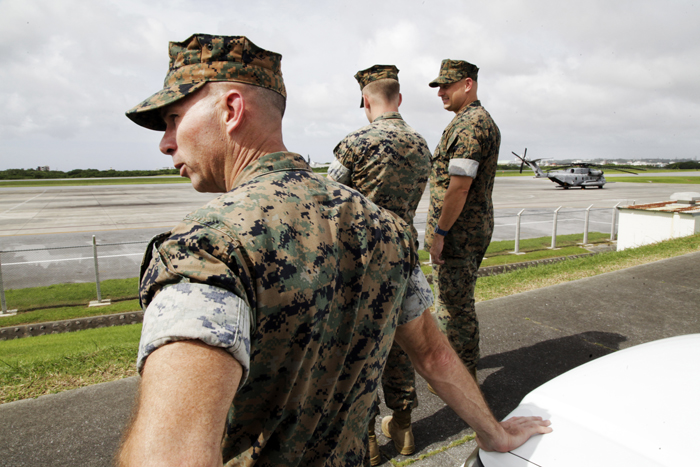 GINOWAN, Japan — It’s election time on the Japanese island of Okinawa, and — as always — the presence of U.S. military bases is center stage.

“Give the children of Okinawa back their blue sky,” the leading candidate for the governor’s job, Denny Tamaki, told an election rally last week, vowing to significantly reduce the presence of U.S. troops if he wins. “We will regain peace for the people of Okinawa.”

This semitropical island is home to about 19,000 U.S. Marines as well as the largest U.S. Air Force base in the Asia-Pacific. The sprawling installations, the Pentagon says, are vital not only for the defense of Japan but also for keeping the peace and projecting American power throughout the region.

But local resentment has been bubbling for decades.

The American military is the main election issue, polls show. And Tamaki is the narrow favorite to become Okinawa’s new governor in Sunday’s vote. That outcome would create another headache for the U.S. military and more stress in the U.S. alliance with Japan.

The Pentagon calls the alliance the “cornerstone of stability” in the Indo-Pacific region. But President Donald Trump again asked at the U.N. General Assembly last week if Japan, a country with a large trade surplus with the United States, is contributing enough to its own defense.

The hot topic is Marine Corps Air Station Futenma, which is surrounded by housing in the ever-expanding city of Ginowan. There is a two-decades-old plan to relocate the base to a more remote site at Henoko in the north of the island and move nearly half of the Marines to other bases in Guam, Hawaii and Australia.

But Tamaki says that’s not good enough. Like previous Gov. Takeshi Onaga, who died in office last month, he opposes the expansion of the base in Henoko and wants a more sweeping redistribution of U.S. forces to other parts of Japan.

U.S. bases take up nearly one-fifth of the land on Okinawa, twice the size of Guam but with more than 10 times the population, at 1.85 million people. Okinawa is home to roughly half the U.S. military forces in Japan.

Tamaki’s conservative opponent, Atsushi Sakima, is backed by Japan’s ruling Liberal Democratic Party. He says the base relocation should go ahead, freeing up a large swathe of prime land for development. But he also wants immediate measures to reduce the noise of low-flying aircraft and reduce the risks of crashes or pieces of equipment falling to the ground in residential areas.

Sakima doesn’t directly mention the bases at his rallies. Instead, with LDP politicians at his side, he dangles the prospect of government subsidies and investment if Okinawa accedes to Tokyo’s wishes over the bases.

“At this important juncture, we have to move from confrontation to communication,” he said.

Business interests appear to be backing him, especially in the construction industry.

At Tamaki’s rallies, supporters are generally older, many of them retired.

Behind their views are deeper cultural, historical sentiments. It includes a feeling that this island — once the independent kingdom of Ryukyu that traded with both Japan and China — bears an unfair share of the burden of the U.S. military presence in Japan.

Ethnically different from the people who live on the main islands of Japan, the people of Okinawa have long felt looked down upon.

Taxi driver Seiji Hanashiro, 70, grew up on tales of 1945 Battle of Okinawa, when his hastily conscripted teenage elder brother died. Tens of thousands of Okinawan civilians died in the 82-day battle that saw much of the island razed.

High school teacher Erika Tamayose, 41, complained of “discrimination” by Tokyo but also disagreed with the idea that the bases make her safer. Like many people on Okinawa, her views are shaped by pacifism.

“I grew up in the Cold War, and we were always told that because of the bases, Soviet missiles were directed toward Okinawa,” she said. “Now it could be North Korean missiles. I want Japan to be peaceful and solve its problems diplomatically.”

After World War II, the U.S. military continued to rule Okinawa until 1972, two decades after returning the rest of Japan to self-rule. Okinawa played a vital role during the Vietnam War. The troops flooding through the island brought money but the fact that Japanese courts couldn’t touch them if they broke the law also caused resentment.

Over the years, several incidents fueled outrage, notably the rape of a 12-year-old schoolgirl by three Marines in 1995.

In 2004, a helicopter crashed into a university building, which still bears the scars of the blades and burn marks as a reminder. Last December, a window fell out of a helicopter and into the playground of an elementary school. Today, those children rush into shelters every time they hear an aircraft approaching at play time.

But there is no doubting the strategic value of the U.S. military bases in Okinawa.

Lt. Gen. Eric Smith, who commands U.S. Marine Corps Forces Japan, stands in front of a map to show how the island is perfectly positioned “smack in the middle” of a massive naval environment that is home to much of the world’s population and economic activity.

It provides a “credible, lethal military force” to back diplomacy, he says, reassuring allies, and ensuring the freedom of the seas. It is there to respond to threats ranging from China to North Korea and to humanitarian needs from typhoons in the Philippines to earthquakes in Japan.

Tokyo pays about $1.67 billion a year toward the cost of keeping U.S. troops in Japan, but some critics say it could do more to promote the benefits of the U.S.-Japan alliance.

The two main local papers in Okinawa, meanwhile, are both vehemently anti-base and never miss an opportunity to fuel indignation.

More than 90,000 signatures have been collected to petition for a referendum on the presence of U.S. bases.

Ironically, Tamaki is the son of an Okinawan waitress and an American Marine, who left the island before he was born and he never met. Although he speaks little English, he has faith in its democracy to listen to his entreaties and the will of the people of Okinawa.

“The democracy of my father’s country can’t refuse what its son is saying,” he told a rally.

But experts are less sure. The government of Japan says it has the constitutional right to decide on national security and is determined to push ahead with the replacement base plan.

Professor Masa’aki Gabe at Ryukyu University says Japan is so dependent on the United States for its defense that it will find it hard to change its mind over the Okinawan bases, while Washington is also too wedded to the “status quo” in Asia to radically rethink its deployments.

“In Okinawa, that means the will of the people has not been respected,” he said.