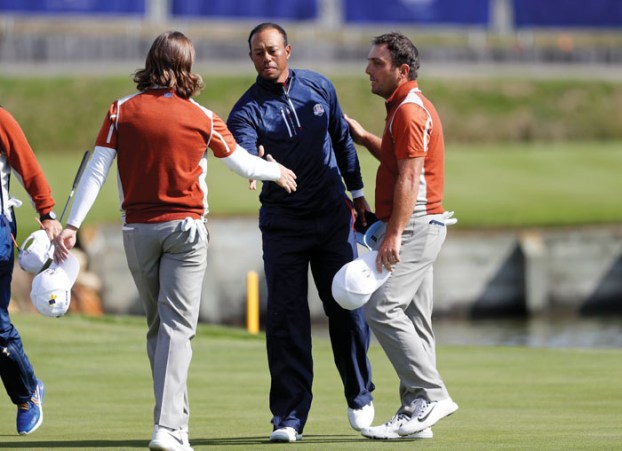 Europe's Tommy Fleetwood, left, and Francesco Molinari greet Tiger Woods of the US after a fourball match on the second day of the 42nd Ryder Cup at Le Golf National in Saint-Quentin-en-Yvelines, outside Paris, France, Saturday, Sept. 29, 2018. Fleetwood and Molinari beat Woods and Patrick Reed of the US 4 and 3. (AP Photo/Alastair Grant) 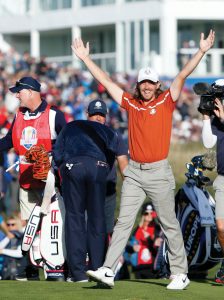 SAINT-QUENTIN-EN-YVELINES, France (AP) — Francesco Molinari and Tommy Fleetwood walked down the fairway after delivering another big point in the Ryder Cup, side by side with their arms around each other’s shoulder.

Here came “Moliwood” at Le Golf National, the latest Ryder Cup sensation and the first European tandem to win all four matches since the current format began in 1979. Even more satisfying was that three of those points came at the expense of Tiger Woods.

But this was no time to celebrate.

“We came here to do a job, and it wasn’t to go in the record books or anything like that,” Molinari said.

And now they have to do it by themselves.

Everything points to Europe taking back the precious gold trophy on Sunday, starting from a 10-6 lead that requires Europe to win only 4 1/2 points from the 12 singles matches on the final day.

Woods hasn’t won any of his three matches.

Europe filled the board with its blue scores right from the start, winning three of the four matches in fourballs for an 8-4 lead, its largest after three sessions in 14 years. It held on in foursomes, with Henrik Stenson delivering clutch putts in the only match that was close.

But the score should sound familiar, and it was enough to make them cautious.

That’s the same deficit Europe faced in 2012 at Medinah when it produced the largest comeback on foreign soil. The Americans have never made up that much ground away from home, though they were the first to win after trailing 10-6, at Brookline in 1999 when they front-loaded the Sunday lineup with their biggest stars.

And that was on the mind of Europe captain Thomas Bjorn, even as he was drowned out by thousands of fans using what was left of their voices to sing, “Ole, ole, ole, ole,” the European anthem for these matches that Americans have heard far too often.

“We go ahead tomorrow and focus on what’s ahead and not what’s done,” Bjorn said. “We are so well aware of what’s standing across on the other side — the greatest players in the world. … I would never get ahead of myself in this.

“History will show me and everybody on this team that it’s not over.”

Even so, he couldn’t contain a smile.

Europe brought five rookies to Le Golf National who sure didn’t seem like rookies — Alex Noren and Fleetwood were the last two French Open champions on the Albatross Course — and certainly didn’t play like that.

His four captain’s picks have delivered six points, while the American picks have contributed one, by Tony Finau.

If not for Jordan Spieth and Justin Thomas, the Americans might really be in trouble. They pulled ahead in a tight fourballs match to beat Ian Poulter and Jon Rahm for the lone American point in the morning that prevented Europe from a second straight sweep of a team session. They rallied from an early deficit against Poulter and Rory McIlroy in foursomes, with both delivering key shots and big putts. With four birdies over their last five holes, they won 4 and 3.

Europe was up 10-4 until Bubba Watson and Webb Simpson won their match on the 16th, and Spieth and Thomas closed out their match right behind them.

“They had a six-point lead, and now it’s four,” Spieth said. “So we are carrying that as a little bit of momentum, I guess. Early wins tomorrow go a long way.”

Thomas leads off the singles against McIlroy.

Woods is in the No. 4 spot against Jon Rahm, who has played two emotional matches without winning.

“I don’t know if there is any one match more important than the other,” U.S. captain Jim Furyk said. “You’ve got 12 of them out there, and we have to win eight points tomorrow to take the cup back home. … We’re trying to make some magic tomorrow.”

Mickelson will have to shake off some rust. He hasn’t played since Friday in a foursomes loss that lasted only 14 holes. Furyk said he would shake up the order for Saturday afternoon foursomes, and that meant keeping Lefty on the bench.

It was the second time in as many Ryder Cups in Europe that Mickelson, who holds the Ryder Cup record with 12 appearances, did not play on Saturday.

Woods played twice, and at times it looked as though he was playing by himself alongside Patrick Reed and Bryson DeChambeau.

Reed went from “Captain America” to looking more like “Private Patrick,” taking himself out of holes in the fourballs session with too many shots into the gnarly rough, in the water and one out-of-bounds.

That wasn’t enough to contend against “Moliwood.” The fourballs match was all square until Molinari ran off three straight birdies. The foursomes match was never close, as Fleetwood delivered big putts to win holes, each time turning to the crowd in a crouch, dropping both arms and pumping them wildly.

They were 5 up at the turn over Woods and DeChambeau, and a brief rally only delayed the inevitable.

Woods has failed to win seven consecutive matches, dating to his singles victory against Molinari in Wales in 2010. Woods, coming off an inspiring victory at the Tour Championship for his first title since his litany of back surgeries, has looked flat in the Paris suburbs.

He hasn’t had much help, but he also missed key putts around the turn that allowed Europe to build a big lead.

“Everything feels pretty good,” Woods said. “Just pretty (ticked) off, the fact that I lost three matches and didn’t feel like I played poorly. That’s the frustrating thing about match play. We ran against two guys that were both playing well.”

The rest of the European team wasn’t too shabby either.

By Mike London mike.london@salisburypost.com SALISBURY — Catawba doesn’t look like a 1-3 football team, doesn’t think of itself as a... read more