Emergency responders come together for “Challenge of the Badges” fundraiser 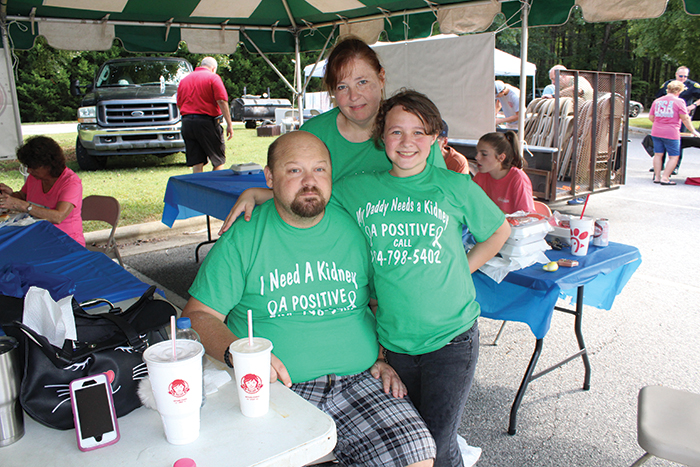 Andie Foley / Salisbury Post - Allen Carlyle attends the event with wife Norma and daughter Alana. Allen had just been released from another hospital stay hours before.

Allen Carlyle may have just left the hospital’s intensive care unit on Saturday morning, but even that wouldn’t be enough to stop him from attending the afternoon’s “Challenge of the Badges” fundraiser at Dan Nicholas Park.

“If you get this many people to come together for you, you make an appearance,” he said as he sat in the shade among throngs of fundraiser attendees, many enjoying the plates of freshly barbecued chicken for sale just feet away.

The chicken plates were the central part of the challenge’s fundraising efforts, with proceeds helping offset medical costs incurred by Carlyle, a Rowan County 911 dispatcher. The fundraiser was a collaboration between all of Rowan’s emergency response departments.

Carlyle has been in kidney failure since September of last year, yet continues to work as often as he’s able.

His fellow emergency service personnel have rallied behind him ever since, supporting him through dialysis and, later, his search for a kidney.

Allen Cress, director of 911 Communications, said his office had even converted a small conference room at the dispatch center into a place where Cress can undergo his dialysis treatment.

As Carlyle surveyed the numbers dropping by to donate or pick up their chicken trays, his eyes filled with tears.

“Thankful, that’s the only word I can use to describe how I feel,” he said, a thought that lingered despite a quest for a kidney donor that had included many ups and downs.

Some 30 attempted donors have been turned away for various reasons, Carlyle said, and they were once again playing the waiting game with another potential match, Jennifer Grubb.

Grubb had contacted Carlyle’s wife offering her kidney after seeing a plea on Facebook.

“I wouldn’t know her from Adam if she walked up here,” said Carlyle, though he would get the opportunity to meet her just moments later.

Grubb surprised Carlyle before the start of the “Challenge of the Badges” main event, a concert by Darrell Harwood.

Her news? She’d finally made it through the screening process, and had been approved to proceed with the donation.

“I hope you have no plans on Nov. 13, because we’re going to surgery together,” she said from the stage.

As the audience erupted into applause, Carlyle and his family embraced and hugged through more tears.

“It’s great to live in a country where we love each other, even though people want you to think this is a horrible place,” said Sheriff Kevin Auten after the announcement. “This is what life is about.”