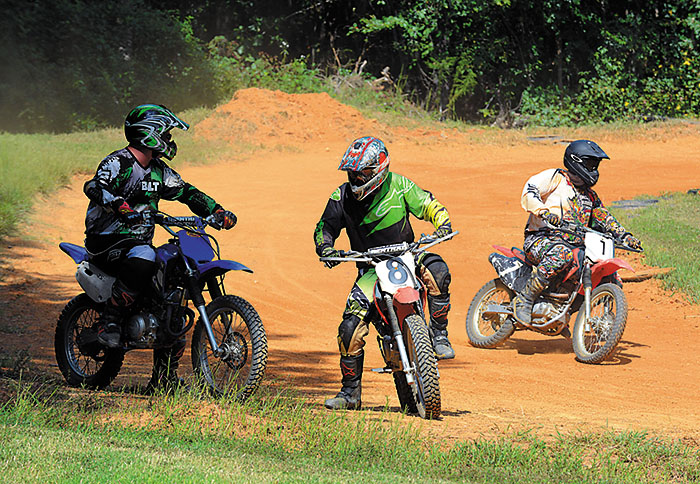 Wayne Hinshaw / for the Salisbury Post Veterans ride dirt bikes around a track at Countersteer, a program that helps them deal with PTSD.

SALISBURY — Aaron Stevenson saw the effects of the Korean War on his father, who suffered from what was then known as shell shock, a disorder that today is commonly referred to as Post Traumatic Stress Disorder (PTSD). The Rowan County resident and former motorcycle racer has combined his love of motorcycles with the desire to see veterans manage a life after military service.

Stevenson already had a multi-discipline motorcycle training school, Cornerspin, but when he began talking to veteran friends he discovered a lot of the men and women who returned home were lost. Many of the veterans suffered from PTSD, oftentimes with no outlet. In many cases, in a quest to gain that piece of themselves lost in combat the veterans unintentionally placed themselves in harm’s way.

It’s not uncommon for soldiers to gravitate to motorcycles. In 2016, Stevenson and his team included a new teaching component to help combat veterans channel their adrenaline.

“It’s about providing positive coping mechanisms; getting them to socialize. They’ve gone through a lot of stuff. It’s a big deal getting them out,” Stevenson said.

The Countersteer Veteran Experience is a weekend motorcycle training event. Veterans of all branches, most of whom have been medically discharged, undergo an application process to participate.

“They are on edge and get back to the real world. I looked at and said we need to educate our veterans and then we started seeing the positive benefits. This is no different than equine therapy, mountain climbing, and kayaking,” Stevenson said.

Motorcyclists of all different skill levels ride on a number of tracks on a 25-acre facility off Long Ferry Road.

Tim Schwab, a veteran of Operation Iraqi Freedom and Operation Enduring Freedom, is a peer support counselor and an avid motorcyclist. He has enlisted other veterans to come along on the Countersteer Veteran Experience ride. Many of these veterans, Schwab said, he meets in peer support groups at the VA.

“What happens outside of group is most important,” he said.

He said it’s about getting veterans to help veterans.

“A lot of veterans don’t feel safe. When you come home you’re like a fish out of water. This gets them out of the house,” Schwab said.

“We have some veterans who have served five to seven years and every time you go, you leave a little something there,” he said.

Roy Prescott, of Maiden, was medically discharged from the U.S. Army after 12 years of service.

“You learn something invaluable,” Prescott said of the ride experience.

When he retired, Prescott admits he did what most guys did — he had money burning a hole in his pocket and be bought a motorcycle.

“You want to get out there to feel something,” he said.

He, like many veterans, found themselves on a motorcycle on the road at triple-digit speeds.

“When you get out of the military, you miss that esprit de corps. You miss that camaraderie,” he said.

Prescott said everyone wants to be better and when he rides around the track with fellow veterans it makes him feel whole again.

Aaron Dearborn of Georgia heard about Countersteer after seeing a magazine ad.

“I just enjoy being here,” said the retired Marine.

When he retired, he suffered from PTSD to the point he contemplated suicide. He had an identity in the military and when he was done it wasn’t there anymore.

“Ultimately, Christ has to be involved. I started dragging friends out. I do enjoy coming to support the organization,” Dearborn said.

“It’s very freeing. It’s you and the machine,” he said.

Thomas Smith, a California transplant to Indian Land, S.C., had been riding motocross bikes for years.

The U.S. Marine Corps veteran enjoys getting to meet other veterans and wishes there were more veterans who would explore this type of “wind therapy.”

He said a lot of the things he’s learned during the riding experience are things that can be applied in life. He spoke about learning how to maneuver on the bike and sometimes you crash.

“This is the therapist,” Stevenson said pointing to a bike.

“This is therapy where some of these guys have seen so much bad stuff they come again and again. If we don’t keep them coming and keep them plugged in they are going to stay at home, get drugs and alcohol,” Stevenson said