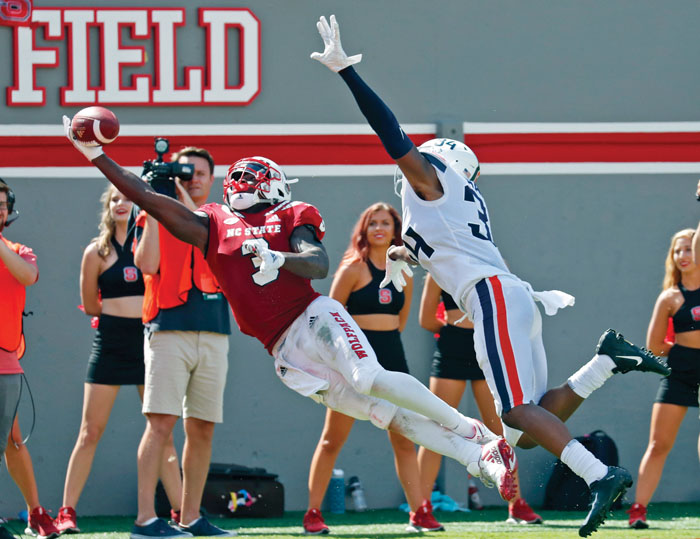 North Carolina State's Kelvin Harmon (3) can't quite make the catch as he is defended by Virginia's Bryce Hall (34) during the second half of an NCAA college football game in Raleigh, N.C., Saturday, Sept. 29, 2018. (AP Photo/Chris Seward)

CLEMSON, S.C. (AP) — With new starting quarterback Trevor Lawrence knocked out of the game, Travis Etienne scored on a 2-yard run with 41 seconds remaining in the fourth quarter for Clemson.

Etienne had three TDs and a career-high 203 yards rushing to bail out the quarterback-depleted Tigers (5-0, 2-0 Atlantic Coast Conference). They went from having one too many starting-caliber QBs earlier in the week to not enough by the second half against the Orange (4-1, 1-1).

Lawrence left his first career start late in the second quarter with a possible concussion. Lawrence was promoted to starter earlier in the week by coach Dabo Swinney and that prompted senior Kelly Bryant, who had started the first four games and led the Tigers to the College Football Playoff last year, to leave the team. That left one-time third-stringer Chase Brice to lead the comeback — and it looked bleak when Syracuse’s Eric Dungey bulled his way in for a 1-yard score with 12:58 remaining to make it 23-13.

Etienne’s 26-yard touchdown run with 11:08 to go drew Clemson within a field goal and Brice, a redshirt freshman with just eight career passes, directed a 94-yard scoring drive that included a 20-yard completion on fourth-and-6 to keep things going.

STATE COLLEGE, Pa. (AP) — Dwayne Haskins threw two touchdown passes in the final seven minutes and No. 4 Ohio State wiped out a 12-point deficit to beat No. 9 Penn State 27-26 on Saturday night in another wild game between the Big Ten powerhouses.

Trace McSorley had 461 total yards, including a career-high 175 rushing and threw two touchdown passes, and the Nittany Lions (4-1, 1-1) went up 26-14 with eight minutes left in the fourth quarter on Miles Sanders’s 1-yard plunge.

For the second straight season, Ohio State (5-0, 2-0) made a fourth-quarter rally from a double-digit deficit.

There wasn’t anything wrong with these Hokies that another trip to Duke couldn’t fix.

Willis threw for 332 yards and a career-best three touchdowns in his first start for the Hokies, helping them upset No. 22 Duke 31-14 on Saturday night.

Willis, a transfer from Kansas taking over for injured starter Josh Jackson, was 17 of 27 with a 27-yard TD pass to Damon Hazelton, a 67-yard catch-and-run score to Dalton Keene and a game-sealing 10-yarder to Phil Patterson to help Tech steer way clear of its first loss in Durham since 1981.

Humiliated in a 14-point loss at Old Dominion last week, the Hokies (2-2, 2-0 Atlantic Coast Conference) bounced back strong, leading virtually all night to earn another lopsided road victory against a ranked league opponent. They routed then-No. 19 Florida State 24-3 in the opener.

Daniel Jones — back in the starting lineup three weeks after breaking his collar bone — was 23 of 35 for 226 yards with a 23-yard touchdown pass to Noah Gray and an interception for the Blue Devils (4-1, 0-1).

WAKE FOREST 56, RICE 10. WINSTON-SALEM (AP) — The last few weeks were trying times for Wake Forest’s defense. They allowed 41 points in a loss to Boston College. They yielded 56 in another defeat at the hands of Notre Dame. They watched their coordinator lose his job.

On Saturday, players and coaches alike said they got back to having fun. It showed. The Demon Deacons scored two defensive touchdowns for the first time since 2008 and cruised to a 56-24 win over Rice.

The Demon Deacons (3-2) punted on their opening drive, but that was their lone blemish in what was otherwise a nearly perfect start. Excluding a kneel-down to conclude the second quarter, the offense scored touchdowns on six of its subsequent seven possessions.

And then there was the defense, which had performed poorly enough in the first few weeks of the season that Clawson saw fit to fire coordinator Jay Sawvel in the wake of the team’s 56-27 loss to No. 8 Notre Dame. Against the Owls, Wake Forest forced three turnovers, returning two for scores and setting up a short field for another touchdown on the third.

“It was not part of our plan for the scoreboard to look like this coming into the game,” Rice’s first-year coach Mike Bloomgren said. “But if you don’t execute in a road game against an ACC team with talent on their sideline, it is tough.”

Bloomgren is a former assistant coach at Catawba.

Freshman Ricky Person, Jr. ran for a season-high 108 yards while sophomore receiver Emeka Emezie had his own big day to help North Carolina State beat Virginia 35-21 on Saturday, claiming its Atlantic Coast Conference opener along with a 4-0 start.

Person hadn’t played since the opener due to a hamstring issue, but provided big-play burst to the Wolfpack’s grind-it-out ground game. And Emezie gave NFL prospect Ryan Finley yet another receiving target at an already stocked position.

Person ran six times for 5 yards in the opening win against James Madison and hadn’t played since — and he’s still not fully past the hamstring issue. But he’s the team’s first 100-yard rusher this season — in just 14 carries — and earned the game ball afterward from coach Dave Doeren.

Kendal Futrell sacked Blake LaRussa for a 17-yard loss back to the 3 to end Old Dominion’s final threat in the last 40 seconds.

Herring completed 24-for-42 for 309 yards and three touchdowns. He was intercepted twice. Tahj Deans and Trevon Brown and Deondr Farrier all caught scoring passes, with Deans pulling in a 4-yarder to cap a nine-play drive that cut Old Dominion’s lead to a point, 35-34 with 5:22 left to play. Verity’s PAT was blocked by Oshane Ximines.

East Carolina’s defense forced two four-and-outs, setting up the final Pirates drive. Herring completed a 16-yard pass to Dean on fourth-and-10. After stalling at the 21, Verity kicked the game-winner.

Appalachian State (3-1, 1-0) had five consecutive touchdown drives in the first half, scoring 21 points in each of the first two quarters for a 42-7 lead. Thomas had scoring runs of 7 and 54 yards and throwing plays of 2 and 27 yards.

Thomas passed for 146 yards with two interceptions and he had 77 yards on six carries. Jalin Moore added 123 yards on the ground with two scores. Three of App State’s 10 completions were for touchdowns.

The roval at Charlotte is the big NASCAR race…