Banned books: Who should decide what we read? 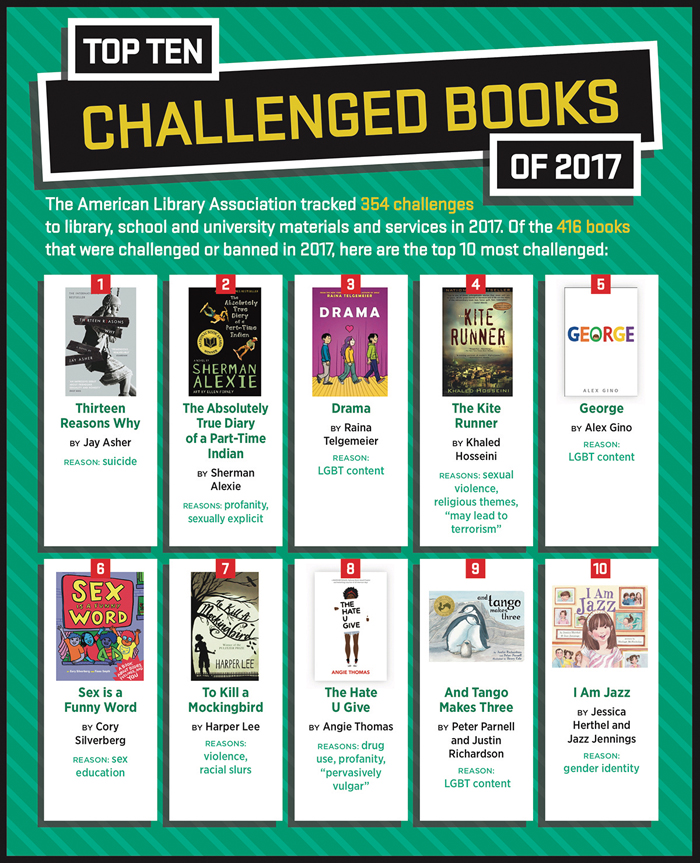 Courtesy of the American Library Association

Well, there’s some argument that in this day and age, banned books are no longer an issue, but others point to the current political climate and the threats to a free press.

Either way, people are still asking for certain books to be banned, especially parents. Here are some answers from The American Library Association, which promotes awareness of banned books and believes in the freedom to express one’s opinions even if that opinion might be considered unorthodox or unpopular, and stresses the importance of ensuring the availability of those viewpoints to all who wish to read them.

What is the difference between a challenge or banning?

A challenge is an attempt to remove or restrict materials, based upon the objections of a person or group.  A banning is the removal of those materials. Challenges are an attempt to remove material from the curriculum or library, thereby restricting the access of others.  Due to the commitment of librarians, teachers, parents, students and other concerned citizens, most challenges are unsuccessful and most materials are retained.

Why are books challenged?

Books usually are challenged with the best intentions — to protect others, frequently children, from difficult ideas and information.

Censorship can be subtle, almost imperceptible, as well as blatant and overt, but, nonetheless, harmful.

Often challenges are motivated by a desire to protect children from “inappropriate” sexual content or “offensive” language. The following were the top three reasons cited for challenging materials as reported to the Office of Intellectual Freedom:

• the material was considered to be “sexually explicit”

• the materials was “unsuited to any age group”

Throughout history, more and different kinds of people and groups of all persuasions than you might first suppose, who, for all sorts of reasons, have attempted—and continue to attempt—to suppress anything that conflicts with or anyone who disagrees with their own beliefs.

According to our infographics, parents challenge materials more often than any other group.

Fundraiser at Morgan Ridge to raise awareness for S.O.A.R.